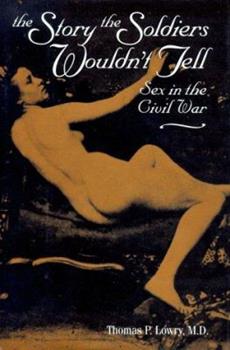 Story the Soldiers Wouldn't Tell: Sex in the Civil War

First book to cover all aspects of sexuality during the Civil War. Based on area original sources, including the soldiers' jokes, songs, letters, and diaries.

Published by Thriftbooks.com User , 14 years ago
I bought this book at the Book Store at the Wilson Creek Battlefield in Springfield, Missouri. Finding it came as kind of a surprise to me. It didn't seem like the kind of book that would be available in a National Park Book Store especially in the heart of the so-called "Bible Belt." Since I wasted more than 36 hours stuck in various airports because of weather on that trip, I was delighted to have purchased some interesting reading material. My laptop also decided not to work during that trip, so this book got a very careful reading. As the title says so well, this is information that soldiers wouldn't tell their girl friends, wives or family. Because of that, most of the book's source material comes from long-hidden and secret diaries, medical reports, rape trial transcripts, and official army reports. It overwhelming deals with illicit sex and prostitution. Love letters were also a major resource but many of those weren't very explicit about sex, only romantic longings. When the soldier from both the Union and Confederate sides were home on leave making babies with their wives there was naturally relatively little written source material being created. Over all, this book was fascinating reading. The problems of rampant venereal diseases so devastated the Union Army that it forced the military to start licensing prostitutes who were judged disease-free by the army's doctors. It also forced prostitutes who were infected to take treatment in hospitals. Major General Joseph Hooker's camp followers were so numerous and infamous that they were given the good general's name and the term "hooker" was coined to the ever-lasting memory of that Civil War General. Rapes were relatively rare on either side of the war. Americans were fighting fellow Americans, often their own relatives and women and children were protected by both sides. Lowry does report the details of some rape trails based on extensive military court transcripts. Soldiers often away from home for the first time, and knowing that they were going to face death in their next battle, were naturally curious to experience the forbidden pleasures offered by the huge numbers of prostitutes. Nude portraits, both of the "French Post Card" variety and even daguerreotypes were carried into battle inside soldier's uniforms along with the pictures of wives and girlfriends. In order to combat the epidemic of venereal disease, the military actually figured out how to clean up the problem and the book details of how uncooperative prostitutes were shipped out of town by special guarded riverboats. Needless to say, these boatloads of sex workers weren't welcomed at many of the destinations. Oddly enough, most of the successful methods learned for controlling venereal diseases during the Civil War were completely ignored when World War I began and the Americans had to relearn the same tragic lessons. For any reader interested in the history of American Civil War this is a must read. It fills in t

Published by Thriftbooks.com User , 17 years ago
Written by a medical doctor and historian, "Sex In The Civil War" shows that our prudish Victorian ancestors really weren't so uptight after all...in fact, some things haven't changed that much. Sometimes hilarious and always informative, Dr. Lowry covers everything from bathroom invective to antebellum birth control using research gleaned from period medical texts, diaries, military records and of course the soldiers' letters home. An entertaining and educational look at the birds and the bees in the nineteenth century.

Published by Thriftbooks.com User , 17 years ago
It has said that ninety-nine percent of a soldiers' life is taken up with camp duties, training, mass movements, red tape, make-work and, if he is clever, leave. As the the majority of books on military history deal with battles and the personal lives of commanders, readers seldom get an accurate picture about the experience of the troopers who must bear the burden of war on (often) anonymous shoulders. War does seem to bring out the best and worst in human behavior, and perhaps in historians as well as fighters. How can an author spend years discovering what a general did on a single occasion and not explore the daily hopes and fears of the common men and women in the field? In each chapter, Lowry details a different aspect of life for the men in uniform and the women who loved them. Some parts are noteworthy as they detail problems which had no titles at the time (the Rev. James C. Richmond,in 1863, was pestering a goverment clerk named Rosa Bielaski in an unremitting manner we now call "stalking"). Each section cover human folly briskly, with a dry wit and even some sympathy. For a good time, read this book.

A Must for Civil War Researchers

Published by Thriftbooks.com User , 20 years ago
I've read many books on the Civil War, but this is one of the best. Lowry does an incredible job digging up the seamy side of the war and presenting it in unflinching fashion. Yet at the same time, he views this stuff with a detached and nonjudgmental eye, and with gentle humor as well. Lowry often picks up where Bell Irvin Wiley left off in his wonderful "Life of Johnny Reb" and "Life of Billy Yank." Where Wiley tiptoed away from certain subjects (he was writing in the '40s, after all), giving the reader only a titillating tidbit followed by a footnote telling us we could find the information at some faraway library, Lowry seems to have gone and looked up that information for us, and presented it in all its glory. A notable example of this is the poem about collecting urine in the South for making gunpowder. Wiley only told us the poem existed; but Lowry prints it, and it's a howler! If you want to go on believing that all the Civil War soldiers were pure as the driven snow, this is probably not the book for you. But if you like your history fascinating warts and all, buy this book!

Fascinating tale on a taboo subject

Published by Thriftbooks.com User , 22 years ago
Lowry's book, tackles the unmentionable subject,the admission that the men fighting on blood soaked ground, standing up for the preservation of the Union, valiantly carrying on duties given, were also just men. Normal and some abnormal sex drives were not only present but quite commonplace. I applaud the audacity of a novelist to brave the ridicule and chastizing to come forth with an important novel such as this. Yes, rape, homosexuality, prostitution ran wild during the war years, but the point Lowry attempts to make is, does it really cloud the memories of the time? In a way yes, but the life although more primitive, we must allow for the carnal desires of all not to be made feel ashamed, even in those that lived 150+ years before us when the subject was not spoken of. I found all of the chapters fascinating and overflowing with interesting facts. A different take on the Civil war, but a necessary one. Great reading, and highly recommended.
Trustpilot
Copyright © 2022 Thriftbooks.com Terms of Use | Privacy Policy | Do Not Sell or Share My Personal Information | Accessibility Statement
ThriftBooks® and the ThriftBooks® logo are registered trademarks of Thrift Books Global, LLC