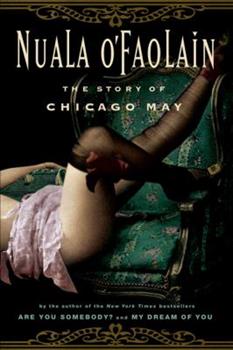 The Story of Chicago May

A New York Times Bestselling Author. At nineteen, May ran away from her home in Ireland to experience life in America, eventually ending up in Chicago. Compellingly attractive to men, she became a prostitute and eventually was hailed as "Queen of the Underworld." Falling in love with a big league criminal, May followed him to Paris where they successfully robbed the American Express. Apprehended, tried and spending time in prison, May returns to her...

When History and Memoir Mix

Published by Thriftbooks.com User , 15 years ago
Like some of the previous reviewers, I was annoyed and bewildered after the initial reading of this book. Not because it wasn't well-written. It is. But the intermingling of the author's experiences and what she perceives May Duignan-Churchill to have felt/experienced was disorienting because I thought I was buying a biography of Chicago May. Most historical biographies are devoid of personal observations unless the author happened to be there along with his / her subject, which certainly wasn't true in Nuala O'Faolain's case. It didn't take me long, however, to appreciate "The Story of Chicago May" for the unique literary effort that it is. O'Faolain is using May Duignan's story to depict one woman's struggle for independence AND show how similar struggles go on today despite increased earning power and educational opportunity. The author is an accomplished memoirist, and in this book she uses her brilliant capacity for insight to help make sense out of a cheerfully unrepentant female crook's career. By the end of the second reading, I loved the book. That said, I understand why other readers who expected a no-nonsense historical biography, packed with facts and no fancy, were disappointed.

Published by Thriftbooks.com User , 16 years ago
The biography was much as described in other reviews, where an interesting person was described both through the historical facts found and personal experiences of the author. I enjoyed O'Faolain's strategy and the story of May's life.

Published by Thriftbooks.com User , 16 years ago
I was struck with the skill and insight that the author demonstrates to draw us to this character. May becomes an examp-le of a human soul trapped by her environment and able to discard the yoke of fear that holds us in a dead-end life. She emerges as a soaring butterfly but is conscious of the difficulty of returning to "comfortable" life after living on the edge of society and flaunting it. The author carefully guides us thru the difficult years of incarceration and rejection, and is most skillful in identifying with the character in a way that makes the reader both despise and embrace her. Truly a fascinating story told in a manner which traps and holds the reader in timeless suspension.

Published by Thriftbooks.com User , 16 years ago
I thought that this was a terrificly engaging book - read in two sittings. I very much liked Ms O'Faolain's two volumes of memoirs and this is a discernable and organic development of those investigations into life and love. This is a feminist, though unacademic, rewriting of history using impressively detailed research to recreate a picture of a largely unknown and 'unimportant' woman who was notorious as a streetwalker and bank-robber in her day. The combination of disparate sources - some less reliable than others - with the author's own ruminations on the mindset of her subject and the exile of her brother, makes this tale of two women layered and effortlessly enagaging. O'Faolain manages to be chatty while shrewly intelligent, approachable while uncompromising in her retelling of a forgotten history. Especially fascinating, and wholey unexpected, is May's encounter with Irish rebel Countess Markievicz in prison in England. O'Faolain manages to uncover a May who is both of her time and very modern; endlessly independent, often ruthless while also foolish and vulnerable in affairs of the heart. Chicago May's life was not heroic but it was filled with wildness and incident - across cities, continents and love-affairs. It would make a wonderful film though it might prove too strange to be believed. O'Faolain's decision to place herself in the narrative of its telling gives back to May some of the humanity denied to her in the yellow press of her time as well as offering the reader an always interesting insight into the mind of a strikingly intelligent, lucid and emotionally frank biographer.

process based research and biography ,Yes!

Published by Thriftbooks.com User , 16 years ago
I heartily disagree with the previous review. Nuala O'Faolain is not seeking to merely recreate a biography in this book, but to urge readers to consider and ruminate upon the lives of women on the fringes of society, those millions who have led hard-scrabble, often brutal, lives throughout history. Her commentary seems, to me, not to be intrusive, but rather chronicles the connections made between the lives of the author and the subject. O'Faolain examines what might be universal themes, tying May to her family, to herself, to the reader, to the world. If one only wants to know about Chicago May, in the way we might examine her at a historical museum, this may not be the book for that person, but for those who wonder about how women fall into infamous and terrible situations, how history is rewritten, and what the realistic brutalities of early twentieth century life were--this book will give those readers a lot to think over.
Trustpilot
Copyright © 2022 Thriftbooks.com Terms of Use | Privacy Policy | Do Not Sell My Personal Information | Accessibility Statement
ThriftBooks® and the ThriftBooks® logo are registered trademarks of Thrift Books Global, LLC