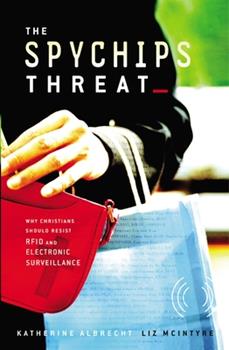 The Spychips Threat: Why Christians Should Resist Rfid and Electronic Surveillance

Ever feel like you're being watched? This eye-opening book shows how a new technology may soon track your every move . . . and pave the way for the fulfillment of end-time biblical prophecy. A revolutionary technology called RFID (Radio Frequency IDentification) is poised to expose our habits, secrets, and slip-ups to money-hungry marketers, savvy criminals, and government snoops. One day soon, our shoes could keep track of our footsteps. Stores could...

Review of a Non-Christian

Published by Thriftbooks.com User , 12 years ago
I mention that I am a non-Christian only because I think this is a book everyone should read, and not because of the biblical end-time parallels the authors make (likening implanted RFID to the 666 'Mark of the Beast'). I think everyone--Christians and non-Christians--should read this book because this is a frightening technology. Like a gun, the technology itself is not "evil". But as the authors point out, just imagine if an evil man, such as Hitler, had lived in a time when every item manufactured on the planet was tagged with its own RFID chip & number--a time we are fast approaching*. How would anyone have ever escaped Nazi Germany? Imagine if a new megalomaniac decides that some segment of the population is a threat--how would that population evade extermination? If you didn't live through WWI or II, don't be fooled into thinking 'it can't happen here'. As Joe Conason pointed out, "It CAN Happen Here". The point is, it is irresponsible for us to stick our heads in the sand and allow a technology like this to germinate unchecked until one day a new Hitler does arise, seizes power, and uses this technology to wipe out his "enemies". A note concerning the two negative reviews on the site. The first, written by Rafael A. Collantes Bellido, states that the author doesn't have a clue as to what she is writing. RFID is real, it is already out there, and those "databases" he mentions will take on a new life entirely when they are capable of tracking the full lifespan of a product even after it is purchased and taken home by the user. So to say that the authors do not have a clue as to what they are writing is nonsense. The fact is, this technology is real. Go into any store--Wal Mart, Target, where have you--and look around, and you will already find this technology on store shelves. You know that little square white tag that is sometimes sewn in to clothing or taped to a high-end electronic item's box--the one that if you hold it up to the light looks like it has a computer chip inside? Well, most of those are simply magnetized anti-theft tags that will simply trip up the sensor when you walk out of the store. But if there is a little square in the middle, THAT indeed is a computer chip, capable of sending out a 'ping' to identify itself when it comes into proximity with an RFID sensor. Somewhere, a database, or perhaps many databases, is storing this information. Imagine your right and left shoes "pinging" thier own specific location in time and space every time you walk or drive past a sensor, and then imagine someone somewhere in government deciding that you are an enemy who needs to be tracked, and you start to get an idea of the invasion of privacy--and danger--this poses. And for those of you who are thinking "but hey, they'll only use this against the terrorists"--consider the fact that some future dictator might shift away from genuine terrorists to American groups they deem a threat (if you define yourself as a C

Published by Thriftbooks.com User , 16 years ago
This book was very informitive, detailed and accurate. The price was great as well.

Published by Thriftbooks.com User , 16 years ago
RFID has an important role in a ubiquitous spy network that is capable of serving powerful government officials, hostile regimes, criminals, pharmaceutical companies, insurance providers, and employers. The RFID industry is planning for humans to receive subdermal microchips, and for personally-identifiable chips to be embedded in everything we interact with. Potential for privacy loss is enormous, its implications are profound, and it will affect everyone. Item-level tagging precedes the slippery slope that is likely to result in a power-struggle between government and corporate forces to control real-time monitoring of individual lives. Government affection for intrusive surveillance is recently exhibited in Texas, with the Houston Police Department's reckless (not to mention Orwellian) idea of equipping apartment complexes and private homes with indoor video monitoring. Discoveries revealed in "The Spychips Threat" (e.g., NCR's patent application, "Automated Monitoring of Activity of Shoppers in a Market") are not only provocative, but demonstrate RFID trends are quickly evolving from tracking palettes of toothpaste; advancing as devices that surreptitiously acquire and exploit personal data. RFID promises a complicated future, where lives and everyday decisions will be constantly burdened by the excessive knowledge that RFID provides. It is also poised to compliment converging technologies intended for physically controlling humans--devices to be used as punishment methods (like with caged lab rats) via remotely-activated subdermal implants that deliver painful or lethal payloads if we step out of line--all serving the purposes of folks not the least bit concerned with linking our identity to a brand of hair conditioner. If this all sounds hyped and sensationalized, I recommend reading the patent applications for yourself, and statements from industry executives that celebrate future Draconian applications of RFID to provide authorities with methods to "abolish crime". Bad idea for governments to have such complete power--especially in countries that are already theocracies. God help us all. Although the prospect of widespread RFID deployment is such an unpleasant subject, much of this book is delightful in its humor and sarcasm. These authors are brilliant at presenting the emerging human rights threats, as well as developments that Christians should be watchful of in regards to Bible prophecy. How should Christians respond to the preludes of "the Mark"? The book answers this, and provides a well-reasoned response to the misguided notion that we should welcome "the Mark" as a sign of Christ's return. T. Fox

This Book is a MUST read !

Published by Thriftbooks.com User , 16 years ago
It is a new day for commerce in America and if you thought those annoying marketing calls to your home are bad, wait to you hear what's in "store" for you. The corporate giants are not satisfied with making millions of dollars, they want more, much more. Imagine the next time you enter a supermarket for a loaf of bread your identity, financial standing and buying habits enter as well. That is the vision many corporations see in implementing Radio Frequency Identification (RFID) microchips into their products. The slogan "to hawk you're wares" used to mean the peddling of one's goods. Now it is more apt to describe a bird of prey hunting your every purchase when RFID technology enters the fold. As a freelance journalist whose work has been fortunate enough to appear on websites such as WorldNetDaily.com I have been absolutely amazed at the scope, detail and evidence Katherine Albrecht and Liz McIntyre have unveiled in their book, "The Spychips Threat". Imagine a world where all products, goods and possibly yourself have been injected with a tiny Radio Frequnecy Identification (RFID) tag? Think that scenario is impossible? Not only is it possible but as Albrecht and McIntyre explain in their book, it is heading towards reality unless people stand up and make their voices heard! The reason why RFID use is especially important for Christians to understand is best summed up in the authors own words: ""We believe it is essential for Christians to consider the implications of the industry plans we have uncovered and share in this book. These plans include tracking people around stores, following their movements in public places, and even spying on them in their own homes. What's more, the end point of all this tracking could be the implementation of an RFID device in people's flesh to number and identify them for a multitude of reasons, including buying and selling. This plan should raise a red flag for everyone familiar with the last book of the Bible." The reference is in regards to the Book of Revelation and the vaunted mark of the Beast as found in Revelation chapter 13. The authors never assert that RFID technology is the fulfillment of biblical prophecy. However what they do present in their book is compelling evidence at both the corporate and government level that this scenario is possible. I highly encourage ALL Christians to get this book and examine the evidence for themselves.
Trustpilot
Copyright © 2022 Thriftbooks.com Terms of Use | Privacy Policy | Do Not Sell or Share My Personal Information | Accessibility Statement
ThriftBooks® and the ThriftBooks® logo are registered trademarks of Thrift Books Global, LLC