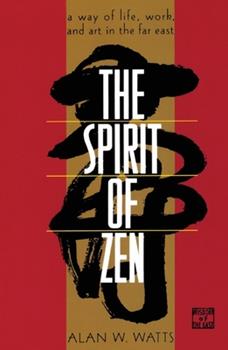 The Spirit of Zen: A Way of Life, Work, and Art in the Far East

Alan Watts's The Spirit of Zen was one of the first books to introduce the basic foundation of Zen Buddhism to English-speaking audiences. This volume still stands as one of the most lucid and concise explanations of the origins and defining principles of Zen, from its beginnings in ancient India and its later transmission to China and Japan, to Watts's revealing portrait of life in a contemporary Japanese Zen monastery. In The Spirit of Zen, Watts...

His first book revealing a brilliant thinker and a masterful writer.

Published by Thriftbooks.com User , 16 years ago
Alan Watts was very young when he wrote this book. But, obviously, his consciousness was wide open and channeling God's thoughts. Buy it, read it, chop wood, cook supper.

The starting point for those who want to learn about Zen

Published by Thriftbooks.com User , 19 years ago
I recently got into Zen, and found its beliefs to be very interesting. The Spirit of Zen by Alan W. Watts was the perfect place to start learning about the groundwork in understanding and analyzing Zen and Eastern philosophies. From there, I'm currently indulging myself on reading up on Zen and now I'm reading Zen Mind: Beginner's Mind by Suzuki (review for that coming soon), and I will read other books by Watt since this book was a real eye-opener.

Published by Thriftbooks.com User , 20 years ago
The Spirit of Zen, written in the early thirties by Watts when he was still a teenager, is not to be mistaken for his strikingly accomplished The Way of Zen, written some years later. It is to be treasured however for those who admire Watts and his unique and highly influential body of work because it was his first published book on Zen Buddhism.It is clearly a young man's book. When it was reissued some twenty-four years later, Watts was asked to revise it, but he declined, saying that it would require a rewriting of the book. He allowed that his expression herein of the philosophy of Mahayana was flawed, but I think the real shortcoming--if we can call it that--in The Spirit of Zen is simply the fact that the very young author did not understand Zen in the way he would in years to come. For an older man to rewrite a younger man's book, even though that younger man be himself, is to create another book, by another person. Watts knew this, and that is undoubtedly the real reason he declined. So he let it stand as it is with its flaws, but also with its strengths.From my point of view those strengths are the felicitous prose, the clear expression, the fresh enthusiasm and the ground-breaking insights from a Western point of view. The weakness is in the young man's misunderstanding of the role of the koan and of the experience of enlightenment. Quite frankly, Watts dove in and wrote what he knew, but what he knew was not yet enlightenment. We can see this in his expression about what he calls "trance" in meditation where he is discussing the use of the koan and zazen in Zen practice. He remarks that "the aims of Yoga and Za-zen appear to be rather different." (p. 80) He was wise to quality with "appears" because most people today would say that the goals are identical, that is, freedom from the delusion and restraint of ordinary conditioned consciousness. On the same page he describes "trance" which he then associated with the yogic practice, as "static and other-worldly" adding that "the Chinese mind [meaning the early Zen mind] required something altogether more vital and practical." Although I am not an authority on Watts, having read only a handful of his books, I would bet that he seldom if ever used "trance" in this sense again. The word has become almost pejorative in this usage mainly because practitioners know from personal experience that meditation involves any number of states of mind, and to reduce the experience to "being in a trance" is misleading. Meditation (which really is zazen--"just sitting") is an experience unique to each individual, not translatable, while being as "vital and practical" as you can get, whether the approach be yogic, Christian mystic, whirling dervish, koan-inspired or whatever.One can also see Watts's struggle toward an understanding of the use of the koan. He writes that the disciple "arrives at a state where the dilemma of life [is] enshrined in the Koan...," missing the "is." (p. 49) Whil

Published by Thriftbooks.com User , 22 years ago
Alan Watts writes a down-to-earth overview of the fundmantals of Zen absent of the latest hype given this recently popular philisophy. Written before the onslaught of Zen commercialism, he focuses on the essense of the religion and its profound spirituality which had previously been shrouded on a veil of mystery and pardox.

Published by Thriftbooks.com User , 22 years ago
This slim volume, written during its author's nineteenth year, is remarkable for it's intelligence and the insight it reveals into a subject that little was known about at the time. Originally published in 1935 in London, Alan Watts' The Spirit of Zen demonstrates a maturity of perception far beyond its young writer's years. For the reader who is already familiar with Watts, it provides us with a rare glimpse of the master in his formative years, and shows, even at this young age, the ease with which he was able to describe the indescribable, an ability that became his stock in trade. The current volume, in its third edition, published in 1958, has luckily been unrevised in the main with only additions to the bibliography for the discerning reader to pursue. As an introduction to Zen Buddhism it achieves its goal astonishingly in 123 pages during which it covers a little of the history of Zen; the heart of what Zen attempts to accomplish--enlightenment; the principle techniques that it uses--zazen and the koan; what life must have been like in a Zen community; and the affect it had on Asian civilization. This book shows Watts in the midst of quickly seeing into and revealing to his readers the heart of its subject, as though to give them the key before they even have the chance to open the door and look, unassisted, for themselves. As Monica Furlong states in her 1986 biography Zen Effects: The Life of Alan Watts: "It is easy to sense the pleasure with which it [The Spirit of Zen] was written, a particular sort of freshness and enthusiasm that is infinitely touching....But the book remains an important one for those interested in Watts...he [has] managed to state, in a rudimentary way, most of the ideas that would interest and occupy him for the rest of his life." Of course, the best way for the uninitiated reader to sample the flavor of Watts' supple insight is to allow the author to speak for himself. In the following passage Watts sums up the spirit of Zen as well as what became for him the central theme behind the most magical of his writing: "For the Koan is not a means of inducing trance as if some kind of trance were the highest possible attainment for human beings; it is simply a means of breaking through a barrier, or as the Zen masters describe it, it is a brick with which to knock at the door; when the door is opened, the brick may be thrown away, and this door is the rigid barrier which man erects between himself and spiritual freedom."
Trustpilot
Copyright © 2022 Thriftbooks.com Terms of Use | Privacy Policy | Do Not Sell My Personal Information | Cookie Preferences | Accessibility Statement
ThriftBooks® and the ThriftBooks® logo are registered trademarks of Thrift Books Global, LLC