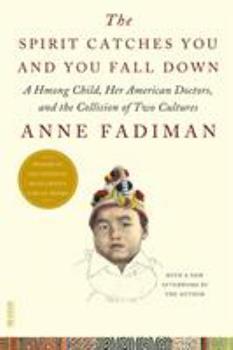 The Spirit Catches You and You Fall Down: A Hmong Child, Her American Doctors, and the Collision of Two Cultures

Now with a new Afterword from the author Winner of the National Book Critics Circle Award for Nonfiction The Spirit Catches You and You Fall Down explores the clash between a small county hospital in California and a refugee family from Laos over the care of Lia Lee, a Hmong child diagnosed with severe epilepsy. Lia's parents and her doctors both wanted what was best for Lia, but the lack of understanding between them led to tragedy. Winner of the...

AS A HMONG AMERICAN

Published by Thriftbooks.com User , 22 years ago
The Spirit Catches You and You Fall is a novel based on the clash of two cultures---the Hmong culture and the American culture. A little Hmong girl is diagnosed with epilepsy which her parents believe is caused by spirits. Because of this belief, they try to cure her illness not with western medication but their own Hmong ways. There is a huge misunderstanding between the parents and the doctors that Anne Fadiman explores. Anne Fadiman provides readers with a vivid, detailed history of the Hmong in Laos to their involvement in the Vietnam War to their struggles in America that explains this clash. On the other hand, she also explains why Americans see and felt the way they did about the Hmong culture particularly the doctors. One shortcoming is that the author implies that Hmong Americans and their experiences are completely homogenous, but the beauty of this book is that she is able to view both sides without judgment. As a Hmong American, it's hard to imagine an American who can achieve this, but the author achieves this so beautifully. It's hard to look at something from a totally different perspective especially because westerners are very rigid about their beliefs and have a sense of superiority in regards to other cultures thus I was shocked that Fadiman was able to communicate and understand the Hmong in such a way. She did a great job of digging beyond the surface and really understanding the Hmong people, their beliefs, and where they are coming from. As a Hmong American, I think she did a great job! She talked of things that I couldn't imagine an American even knowing about until I read this book. It's great to know that an American can look at the Hmong culture without judgment and even come to admire it and see some good in it even though it's very different from her own beliefs. I recommend this book to anyone especially those that are interested in learning more about the Hmong.

A spirit caught me up in this book

Published by Thriftbooks.com User , 23 years ago
Anne Fadiman's book is a fascinating account of what happens when a left-brain culture (the American medical establishment) and a right-brain culture (a Hmong refugee family) go on collision course over a very ill little girl. Lia Lee is epileptic; she has uncontrollable seizures which require medical intervention and treatment. Lia's doctors see her family as negligent and ignorant because their inability to follow a complicated medical regimen makes her condition deteriorate; her family see the doctors as arrogant and insensitive, and insist the medicine they are giving her actually made her sicker. The tragedy is that both the doctors and the family genuinely want to help Lia, but their total lack of communication and inability to understand each other, linguistically and culturally, makes cooperation impossible. Those of us in the 'helping' professions (medicine, nursing, social work) often lose sight of the fact that the relationship between 'helper' and 'helpee' is most effective when each sees the other as an equal partner who deserves equal consideration and respect; instead, the 'helpers' often dole out advice and directions which the 'helpees' are expected to follow without question, and are then labeled backwards, resistant, or even negligent, when they refuse. The book zeroes in on the dangers of ethnocentric thinking in working with or treating people of different cultures; the Lees may have been illiterate and 'backwards' by American cultural standards, but they knew and loved their child. We end up admiring and respecting the Hmong for their warm family life and their support of each other in times of crisis, as well as respecting the medical personnel who grew as human beings as they came to recognize the Lees' humanity and their incredible strengths as parents. Many, if not most, American families would institutionalize a child such as Lia; but to her family, the sicker she became, the more precious she became. Anne Fadiman has given us an informative, excellently researched, uplifting and yet humbling book about a very special family and a very special child. Judy Lind

A divine liqueur distilled from a murky cultural clash

Published by Thriftbooks.com User , 24 years ago
I was one of the physicians involved in the care of Lia Lee. I'm referred to in the book as the physician that first diagnosed Lia's spells as seizures. Neil Ernst and Peggy Philp, the principal pediatricians in the book, were and are good friends of mine. Having experienced Lia Lee's saga personally, and then having read the book, I can only refer to Anne Fadiman's talent as astounding. Anne walks an incredibly fine, and very well documented, line as she describes what happens when American medical technology meets up with a deep and ancient Eastern culture. My team (Western medicine) failed Lia. Never have I felt so fairly treated in defeat, and never have I felt so much respect for an author's skillful distillation of a tragically murky confrontation of cultures. Incidentally, the hospital administrator of the hospital I'm currently associated with rated the book "The best book I read in 1997". He reads prodigiously. Dan Murphy, MD

This is an exceptional piece of work!!

Published by Thriftbooks.com User , 25 years ago
I don't think I should be writing in here since I am a part of the book. This book was amazing! It took me two days to read it and of course I shed a few tears on the way. My sister, Lia Lee, is doing well although she will never be able to see the bright sunlight or the incredible stars that we see everyday and everynite. She is an incredible child with so much love and affection from her family and the many friends she have encountered during her hardships. I was only 7 when all this happened, but I do recall everything from the door slamming incident to the day the doctors told my family that it was okay for her to come but she will not live pass 7 days. I will never forget that week or those many years of pain my family or the doctors had to go through. This book has given me a better view of what can really happen when two different cultures have their own ways of interpreting medicine or life in general. We must understand that different cultures have different ways of curing a person and doctors have their policy they must follow. To avoid another incident like this, we must work together as a whole and not blame each other for not cooperating with one another. Lets hope this book tells us what can happen in the future if we don't work with this now. Anne did a great job on this book! My family couldn't have ask for more. She has become a great friend of my family and we are greatful for it. Anne-thank you !
Trustpilot
Copyright © 2022 Thriftbooks.com Terms of Use | Privacy Policy | Do Not Sell My Personal Information | Cookie Preferences | Accessibility Statement
ThriftBooks® and the ThriftBooks® logo are registered trademarks of Thrift Books Global, LLC