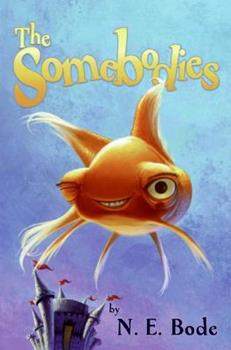 (Book #3 in the Anybodies Series)

There is a city beneath New York City, one made by and for Anybodies. There you can find Bing Chubb's Ballpark, Willy Fattler's ever-changing Underground Hotel, and a castle whose spire sticks up into the dirt-filled sky...dangerously close to the rear ends of unsuspecting picnic-goers in Central Park. It's an extraordinary place, but it is in danger of becoming ordinary because of the nefarious Blue Queen. Somebody has to stop her, and if anybody...

Published by Thriftbooks.com User , 15 years ago
The best thing about this third book is the early chapters with their Roald Dahl-worthy terrible teacher and what happens to her hair, but the second-best thing is the setting. Yes, other writers have done books about an alternative New York City that lies underneath the "real" city, but this version is really a lot of fun--especially the hotel that changes its look and its food and even its denizens every so often just because. Fern and Howard are back, though Howard is just as anti-adventure as always and doesn't get to spend the entire book as a human. The pair are out to foil the Blue Queen's quest to steal souls and rule the city (or cities, since upper NYC is included in her schemes). The plot gets a little muddled in the middle, but soon recovers. Check out the first two books, The Anybodies and The Nobodies. I think I still like the first book best thanks to its extravagant, tongue-in-cheek use of classic children's book motifs and characters. Then again, you'll be happy to run across a great glass elevator in The Somebodies.

Published by Thriftbooks.com User , 15 years ago
It was a great book and I would recommend it to anyone. It really grabbed my attention. Don't forget to read The Anybodies and The Nobodies first!

Gulp! Fern Will Have to be Brave!

Published by Thriftbooks.com User , 15 years ago
After accidentally getting expelled from school and threatened with military academy, Fern and Howard--the boy who is considered her almost-kind-of-sort-of brother--find themselves in the secret Anybody city far below New York City. Fern has an invitation to a meeting of the mysterious Somebodies. All is not well, as they have to take great care not to meet an untimely end. The evil, book-killing Blue Queen wants to rule over the Anybodies; and if she's like most villains, that won't be enough. Fern and Howard must follow a series of clues in order to stop the Blue Queen's dastardly plan. During their adventure in the city beneath the city, they will earn new allies, learn a few lessons, and maybe win a battle too terrible to behold. In the meantime, Fern's esteemed narrator--N.E. Bode--continues to dodge perilous assassination attempts by a certain writing instructor. Be steady and courageous, Young Reader. Fern's adventures aren't for the faint of heart. In fact, it is beyond reason to expect a child like you to read this serious prose without a great deal of worry for our young heroine, Fern. She and Howard will face danger greater than ever, and if they don't succeed, horrible things will happen to everybody! If you want to know what REALLY happens, it is imperative that you pick up The Somebodies as soon as your bookseller or library is allowed to hand you a copy. Keep it safe, because it would be tragic if the secret of the Anybodies gets into the wrong hands! Bravely endured by Christina Wantz Fixemer (Just don't tell that writing instructor! I'd hate to be like N.E. Bode and take drastic measures to avoid that crazy teacher's wrath!) 7/19/2006
Trustpilot
Copyright © 2022 Thriftbooks.com Terms of Use | Privacy Policy | Do Not Sell My Personal Information | Accessibility Statement
ThriftBooks® and the ThriftBooks® logo are registered trademarks of Thrift Books Global, LLC