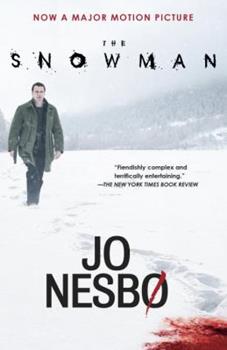 Inspector Harry Hole tracks a Norwegian serial killer in this installment of Jo Nesb 's New York Times bestselling series. Now a Major Motion Picture starring Michael Fassbender. One night, after the first snowfall of the year, a boy named Jonas wakes up and discovers that his mother has disappeared. Only one trace of her remains: a pink scarf, his Christmas gift to her, now worn by the snowman that inexplicably appeared in their yard earlier that...

Published by Thriftbooks.com User , 3 years ago
Could only give this great book 4 stars. I figured the Killer out in the first half of the book and had to deduct 1 star for that.

Published by Thriftbooks.com User , 11 years ago
Nothing like curling up with a good serial killer. But that is exactly what you should do. Go on, get good and comfy, turn off the phone, gather up your favorite munchies and prepare for a pounding long session with Jo Nesbo's Harry hold and his neighborhood of friends and thugs. The fifth (English publication) in a series from master Norwegian yarn spinner, Nesbo maintains Detective Hole's premier position as the best of the hard driven cops in print. Not your typical boiler plate fare, this series stays taut and original from opening to close. Nesbo's books are extremely atmospheric with the Norwegian weather becoming a tactile character on its own. Likable or not depending on their personal take on life, the human characters are distinctive thinking forms of flesh and blood. Colors are every shade of gray in your imagination. There's just something about the way Nesbo weaves his tale and creates Hold's world that make his books unforgettable and not-put-downable.

Published by Thriftbooks.com User , 11 years ago
The Harry Hole series presents the reader with somewhat of an anomaly. On the one hand, we are informed that Norway is virtually free from serial killers. On the other hand, Hole is reputed to be the only detective in the nation with experience in catching serial killers, having accomplished his experience in Australia and also attending an FBI course. And then, serial killers tend to appear in the Harry Hole novels, including this one. The first of several missing persons is a married mother, and the only clue is a snowman outside her home. Shortly before her disappearance, Hole received a mysterious letter which, in retrospect, leads him to believe there was a link between it and the woman's vanishing. In reviewing unsolved cases, Harry and his team find an alarming number of wives and mothers have gone missing over some years. Once again, Jo Nesbo has written a taut thriller, one that is forceful and gripping and, this time, full of madness. His novels just keep on getting better and better. Fast-paced and staggering, always keeping the reader looking ahead to the next shift, keeping one off balance with wonder. Highly recommended.

Pure Perfection! Nesbo Does it Again!

Published by Thriftbooks.com User , 11 years ago
Reason for Reading: Next published in the series (in English). A woman disappears and a few months earlier Inspector Harry Hole had received a threatening note. He is convinced that their is a connection. Then a second woman disappears. Harry and his detectives soon discover a disturbing tale of women, married with children, who have gone missing without a trace over a chillingly large number of years. The clues will take him down so many false roads that his job is on the line not once, but twice. This is a thriller that takes off on new twists with the speediness of a whip crack. What's up for one chapter is down the next with reveal after reveal sending the police on the chase of a clever, determined serial killer who is skillfully directing the police to play into the unsub's own mad theatre of his mind. I've read three of the books in this series so far and this is the most excellent. The red herrings, the false roads which all do connect, in a way, just not the way the police want them to, are an amazing road to follow. Twist after turn will have you gasping as they go after who they think is the killer only to find they have suspicions of someone else ... more than once. I really can't convey how amazingly clever this plot was woven together, with a myriad of clues, characters and evidence Nesbo doesn't miss a step in seamlessly creating an airtight thriller. Funny thing for me is that I guessed who the killer was as soon as the character was introduced, for no particular reason than I thought it would make perfect sense in the end. (Perhaps I read so many thrillers I'm beginning to think like a thriller writer, either that or a serial killer, AAH!). Anyway, it gave me a unique perspective reading this book as I watched my chosen killer and applied all evidence and clues to them and convinced myself I'd picked correctly not that far into the book; that I was actually rather stunned, even though I'd been right, when the narrator out-of-the-blue starts writing from the killer's point of view letting the reader know who is the killer. An extremely intelligent, clever, roller-coaster of a thriller. Jo Nesbo is up there at the top with the best thriller writers of today.

Published by Thriftbooks.com User , 11 years ago
One of the best crime stories you will ever read. Nesbo just keeps getting better and better. The Snowman is guarranteed to make you look over your should as you read. Don't read it late at night, if you know what is good for you...

Snømannen Mentions in Our Blog 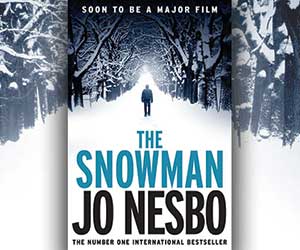