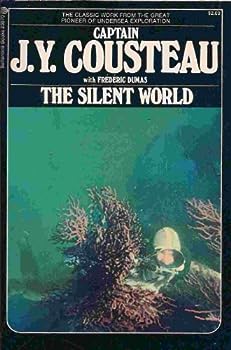 by Jacques-Yves Cousteau and Frédéric Dumas

Before becoming the man who introduced us to the wonders of the sea through his beloved television series, Jacques Cousteau was better known as an engineer and the inventor of scuba. He chronicled his... This description may be from another edition of this product.

How a showman/researcher/storyteller/philosopher defined modern diving

Published by Thriftbooks.com User , 15 years ago
What can be said about Jacques Cousteau and his groundbreaking book that hasn't been said a thousand times? He is undoubtedly the defining figure of modern scuba diving, his books, films, and documentaries known to millions or billions. Even the name of his ship, the Calypso, is known the world over. It's a small volume, this book, just 160 pages, yet it's absolutely mandatory reading for anyone interested in what Cousteau termed "the silent world" under the surface of the water that covers 71% of our planet. The Silent World is the bible of modern scuba diving. Jacques Cousteau himself died in 1997 at the age of 87, but the legacy of his pioneering work with diving and diving physiology lives on. It is all well documented and disseminated worldwide, thanks to this French explorer's unique combination of instinctive understanding of the world under the surface and his equally unique knack of spellbinding the world with his words and images. A total master of public relations and getting the word out, Cousteau managed to grab attention and media coverage wherever he went. Critics went so far as suggesting his media talents exceeded his actual contributions to understanding the seas. At first it's hard to figure out why this slim volume became such a success. It's not a textbook, it doesn't cover the history of diving or even much of Cousteau's own research, and it's not an adventure book. Though Cousteau was French, he wrote The Silent World in English as he had attended American schools in his youth, widely traveled the US, and, of course, extensively lectured in his enchanting French-accented English. Yet, The Silent World clearly reveals its author's non-English origin and decidedly "non-English" thinking. The writing, while precise, often suggests that Cousteau frequently described a word or concept that existed in his native French, but did not directly translate into English. As a result, the writing at times seems a bit flowery and, well, foreign, and you need to read a sentence or paragraph two or three times to figure out what it actually means. Cousteau's liberal use of metaphors, artistic nuances, poetic concepts and words that have since fallen out of currrent language only serve to make The Silent World even more unusual of a literary treat. Anyone looking for technical explanations, precise history, a logical flow of events, or anything one might expect from a world-famous documentary maker and researcher will not find it in this book. The Silent World is a totally unique, very compressed tale flowing from Cousteau's mind. Read half a chapter and you know the man; he's a unique combination of inspired philosophical observer and gifted researcher with uncanny intuition. While others conducted their research methodically and ploddingly, Cousteau always just seemed to know what to expect, how to behave, and what to seek and avoid to make it all seem easy. He and his close associates and friends Phillipe Tailliez and Frederic Dumas us

Published by Thriftbooks.com User , 17 years ago
As great a read today as it must have been over 50 years ago. Being a modern day technical and recreational dive instructor I still find this book a fascinating read and would recommend it to all ages to divers and non divers alike.

Published by Thriftbooks.com User , 19 years ago
If you grew up watching the Undersea World of Jacques Cousteau one night a week, you must read this book by Mr. Cousteau. I read the first chapter of this delightful little book in a diving collection and was instantly drawn to Cousteau's narrating style. Modest and touched with humor, he describes the creation of the aqualung (scuba) and his early exploits with it. Early photos of underwater creatures are amazing. My copy is from the late 1950s and I hold it carefully. It is a physical and figurative jewel to me.

Published by Thriftbooks.com User , 20 years ago
I first read this book when I was about 15. I begged my mother to sign me up for a SCUBA class shortly after and I am still diving 25 years later. I have re-read it about 3 times since then and still keep a copy on my shelf. There is still something very captivating about the early days of diving and Cousteau's descriptions of the silent world. The explorers in his book indulged in a pioneering activity under the nose of the occupying Nazi regime and set in motion the evolution of underwater adventure that millions enjoy today.The Silent World is easy and enjoyable to read. Most of the photographs are hard to see compared with the vast amount of underwater shots available today. However, when you consider the time period these photos were taken combined with the daring of these early pioneers, you can't help but be impressed.This book produced an enjoyable influence on my life and I am sure it will on anyone willing to learn about the early history of underwater exploration.

Published by Thriftbooks.com User , 23 years ago
An adventure of heroic proportions. How mankind began the exploration of the underwater world and how Captain Cousteau and his team of aquanauts undertook a mission on the scale of the Mercury Seven Astronauts. Told by the men who went through the triumphs and the ordeals. This novel will provide a new understanding of how it all came about for those who scuba dive today. Some of Cousteau's team died in their brave efforts to investigate the mysteries of the deep for the rest of the world to see. Contains photographs of the liquid world taken with the first underwater cameras.
Trustpilot
Copyright © 2022 Thriftbooks.com Terms of Use | Privacy Policy | Do Not Sell My Personal Information | Accessibility Statement
ThriftBooks® and the ThriftBooks® logo are registered trademarks of Thrift Books Global, LLC