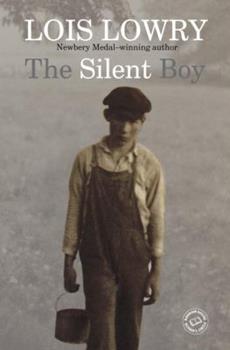 Precocious Katy Thatcher comes to realize what a gentle, silent boy did for his family. He meant to help, not harm. It didn't turn out that way. "The author balances humor and generosity with the obstacles and injustice of Katy's world to depict a complete picture of the turn of the 20th century."-- Publishers Weekly , Starred

Published by findingnemo , 2 years ago
It's crazy how there are different perspectives that come into play while reading this book; we hear one character describe our silent boy and pan to other opinions of the people around her. While watching the silent boy and seeing how he acts through the little girl's eyes, we can't help but wonder and question society. Nevertheless, it was an excellent book and I love Lois Lowry's writing.

Published by Thriftbooks.com User , 5 years ago
Although not necessarily 'action packed' this book is quite intriguing. When I ordered it I really didn't know what to expect except that it would be written in the same style Lois Lowry always writes. All of her books seem to transport me into the characters worlds and put me in a wonderful dreamlike state, simply enjoying the story. I do think this book is NOT for those with very sensitive hearts. I nearly cried and felt like balling my eyes out for a couple days after finishing the book (in one day). But overall it was an amazing book about love, kindness, and the unfairness of life. I definitely recommend!

Unexpected ending for The Silent Boy

Published by Thriftbooks.com User , 14 years ago
The ending of The Silent Boy was very unexpected. I was schocked that Jacob, an autistic boy, was sentenced to life in the Asylum. The ending touched me when it showed how badly mentally disabled people were treated and misunderstood back then. The ending was very sad. Lois Lowry definitly hit a grand slam with this book. I recommend this story for readers twelve and up, but advanced fifth graders could also read this story. Sincerely, An anonymous fifth grader

Autism From a Historical Perspective

Published by Thriftbooks.com User , 15 years ago
This story opens in June of 1987 with the then 85-year-old Katy relating her girlhood at the turn of the 20th century. The flashbacks start in 1908 with the then-nearly 6-year-old Katy, her friend Jessie and Kate's future fiance, Austin. The trio remain lifetime friends. The bulk of the story takes place in 1911. Katy, then nearly 9 learned what the word "maternity" means when she reads it in a dress catalog; her sister Mary is born that year and Nell, a farm girl comes to stay with Katy's family as a helper. Nell comes from a large family and her brother Jacob, 14 has been called "touched" as in "touched in the head." In today's world, Jacob would most likely be considered to have a form of autism. Largely nonverbal, Jacob wears the same hat; enjoys the company of animals and retreats from people and noises. At best, he stands quietly when Katy shares the news of her day with him. Katy's father is a delightful character. A country doctor, he often takes his daughter on his rounds. A feel and flavor of small town America is beautifully portayed in their horse-and-buggy trips. Jessie's family is proud to be the first on their street to own a $900 Ford, then a rarity. Katy's father lets her come with him to the Asylum, a gray stone monstrosity on the edge of town. I like the intelligent discussions and honest answers he gives her; he tells her where babies really come from; I like the compassion he displays towards people in the Asylum. He is a remarkably astute man who understands Jacob's behavior such as the boy's rigid adherence to routine and how that, and his ubiquitous hat make him feel safe. The story of Jacob closes on a sad note. He gives Katy a kitten and applies this act to an unrelated situation. Sadly, Jacob fades out of the town and, at the story's close nobody knew of his fate. Katy takes readers on a history tour; she marries Austin in 1928; Jessie's brother Paul is killed in WWI on June 5, 1918 after dropping out of law school. The Asylum is closed by 1960 and Katy, mulling over her life, decides never to share the story of Jacob with her children and grandchildren. While more progressive minds have prevailed in recent times in re autism, sadly these myths and misperceptions crop up from time to time. The 1988 movie "Rain Man," which I have come to hate is about an autistic savant who was institutionalized because of an unfounded fear he would injure his infant brother. The term "Rain Man" is considered offensive in most autism circles. In 1911, the word autism had yet to be coined and sadly, tolerance was a rarity. Katy's father was ahead of his time. I liked the use of historical photographs and the author interview which was included in this book. That made a good thing even better and the photographs brought the times covered to light.

Published by Thriftbooks.com User , 17 years ago
An old woman is telling a story; the way your grandmother would. Leafing through the family album, she pulls out a picture and tells a bit about the people, the buildings, when the picture was taken. But its not a random; there is a bigger story here. A story of childhood long ago, of becoming a "grown up", of the hard decisions and facts that make up a life. The use of photos and words is flawless; its a surprise to learn in the author's notes that the photos are old, not recent creations for the story. Beautiful, haunting, lyrical.

Published by Thriftbooks.com User , 18 years ago
can build a whole world of the early 1900's in just 178 pages, create characters you remember long after you've closed the book, and say all kinds of important things while gently telling a story? I loved the relationship eight-year-old Katie had with her father. We never doubt that Katie will become a doctor one day because of his patient and gentle teaching. Of course the new baby will not be found in the garden patch! It is because of his kindness and openess that Katie is able to befriend the silent Jacob. Everything seems innocent through Katie's eyes. Taking the new hired girl from her family, the hard lesson her sister Nell, who wants to be a film star, has to learn, the fire at the mill. Even the tragic misunderstanding that puts Jacob into the asylum. Katie has taken the harsh edge from all, and left us to ponder. But that is how I know it's a great book... How long afterward I am still pondering.
Copyright © 2020 Thriftbooks.com Terms of Use | Privacy Policy | Do Not Sell My Personal Information | Accessibility Statement
ThriftBooks® and the ThriftBooks® logo are registered trademarks of Thrift Books Global, LLC