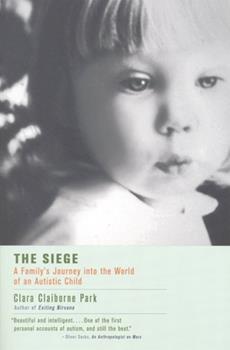 The Siege: A Family's Journey Into the World of an Autistic Child

This classic work tells the tale of how a devoted mother accomplished miracles in fostering the intellectual, social and emotional development of her autistic daughter.

Published by Thriftbooks.com User , 17 years ago
In 1957 when Jessy Park was born (called "Elly" in this book, but later identified by her mother in the sequel "Exiting Nirvana"), very little was known about autism. Elly/Jessy presented behavior that Kanner described more than a decade earlier (1943) when he first coined the term "autism." Elly/Jessy was largely nonverbal for much of her childhood and had difficulty connecting names to people. She loved mathematics and could do complex equations and recognized many polygons. She developed a fascination for counting that has since stayed with her. In 1961, Elly/Jessy then nearly 4 was formally diagnosed with autism. She was enrolled in special needs programs and made progress. She also as is noted in "Exiting Nirvana" proved to be a very talented artist. This is an excellent book that chronicles in minute detail autistic behavior and a family's love and acceptance. Elly/Jessy's three older siblings love her unconditionally as do their parents. Theirs is an intellectual family whose literary pursuits are quite evident throughout this account. It is one of the best early personal accounts of autism in a family. What makes this book unique is that when it was published, it rightfully challenged the parent blaming routine that was the order of the day. Elly/Jessy had three neurotypical (NT) siblings which automatically flies in the face of the disproven and completely asinine parent blaming. At no time was she neglected. She was loved, nurtured, encouraged and accepted. Her special interests in counting and polygons are recognized as an asset, an ability. Fortunately, she is not charged with "perseverating," a harmful and damning word that has caused more harm than it ever helped. It is an extremely judgmental, negative and destructive word in any tense that is best avoided. At no time is that harmful word ever applied to the NT population and the behavior is not limited to the autistic population either. That word is best replaced with "special interests," "repetitive verbalizations / behaviors" which are more accurate and also speak to tolerance whereas "perseverate" simply does not. The book closes with Elly/Jessy at age 8, making progress in her way and at her speed. She and her mother have blazed new trails that continue to weave throughtout autism awareness and acceptance today.

The BEST book a mother can read...

Published by Thriftbooks.com User , 18 years ago
I have a 9 year old son with autism, and have aspergers myself, and I could not have written such an insightful book as did this mother. I got concepts and ideas I hadn't had prior to reading this book, such as the reason behind all the pronoun reversal which she theorizes and explains so well. I was then and am still now in awe of her meticulous record keeping and devotion to her daughter while still maintaining balance in her home and in her personal life. Our household seems to revolve around iep's, perseverations, dr.'s appts, everything 'autism'. Anything I try to say, I fear will come no where close to describing how essential this book is to the library of any mother with an autistic child, or how much it meant to me. Despite the fact I'm not especially fond of reading, I plan to read this book again, fearing I may have missed some wisdom there was so much. I found everything she wrote accessible to my life, despite our difference circumstances. Can't say that about many books I've read. And, I got Exiting Nirvana at the same time, and was glad I did, and eager to read it directly after The Seige. While all the books by Williams and Grandin and Attwood and the more medical type books by Shaw and Candles and Greenspan are super, this one was a STORY, you didn't have to DO anything or make appointments or grasp heavy medical info. Yet it gave me a more FOCUS and future vision and ideas for my child, to give him as successful, fulfilling and happy future.

This is an excellent account written by a parent

Published by Thriftbooks.com User , 23 years ago
Clara Claiborne had a child with autism born in 1958. In those days autism was considered a purely psychological disorder due to poor parenting. Clara had the sense to reject this dogma and help her child even though the professionals at the time could not do anything for her. This was before the IDEA and other government supports. This book is remarkable for its time and will always be a classic. It totally blows away the garbage spewed out by Bruno Bettelheim and the likes.

A book about autism that is about more than the condition.

Published by Thriftbooks.com User , 24 years ago
In her account of the formative years of her autistic daughter, Clara Park gives a beautifully observed and written description of how dealing with a deficit can bring enlightenment as well as pain, satisfaction as well as struggle. Although the book is very useful for those who have or work with an autistic child, it should not be pigeonholed - the writing and the quality of observation and reflection that characterize the book make it deserving of a far wider audience. Read it.

A classic in the literature of autism

Published by Thriftbooks.com User , 24 years ago
A beautifully written and moving account of the development of an autistic child who is now an acclaimed painter and semi-independent. Although it was written in an era when "refrigerator mothers" were routinely blamed for causing autism, Dr. Park had the courage and insight to trust her own instincts, and invent her own techniques to teach her daughter and understand her world. Oliver Sacks has described this as the best personal account of autism ever written.
Trustpilot
Copyright © 2023 Thriftbooks.com Terms of Use | Privacy Policy | Do Not Sell My Personal Information | Cookie Preferences | Accessibility Statement
ThriftBooks® and the ThriftBooks® logo are registered trademarks of Thrift Books Global, LLC