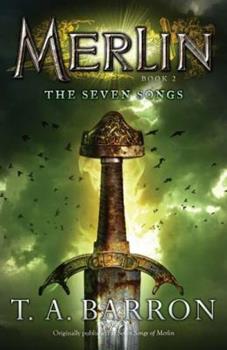 The eagerly anticipated second book in The Lost Years of Merlin epic by T. A. Barron Young Merlin, triumphant after his first encounter with the dreaded Rhita Gawr, has brought new hope to Fincayra, the enchanted isle that lies between earth and sky. Yet when a renewed tide of evil arises, its first victim is Merlin's own mother. To save her, Merlin and the forest girl Rhia must follow the perilous path of Seven Songs of Wizardry that has claimed...

Published by Jeannette C , 2 years ago
I really enjoy reading books about Merlin. I loved this book!! You can't go wrong with this.

Another great novel in the young Merlin epic!

Published by Thriftbooks.com User , 21 years ago
In the second novel of the Merlin epic, T.A. Barron provides an excellent and exciting story for book fans. To save his mother, Merlin must find the essential soul of each of the seven songs of wizardry, written on Arbassa by Tuatha years before. These will enable him to visit the Otherworld and get the cure for his mother. The task seems impossible, both because Merlin knows nothing more about the songs than the writing told him, and although it requires traveling to all 4 corners of Fincayra, his task must be finished in 4 phases of the moon - before Elen dies. As Merlin and Rhia, joined by a mournful Jester, search for the soul of each song, Merlin learns as much about himself as wizardry. He learns many important lessons, including that great wizards need not only skill and power, but humility as well. The book is an exciting and wonderful story, in which we discover even more about the young boy who will eventually become the world's most famous wizard.

The Seven Songs Of Merlin

Published by Thriftbooks.com User , 21 years ago
This book was really good.In fact it was one of the best books i have read.It went on right after the first book The Lost Years Of Merlin.It talks about how Merlin slacks off on his job of restoring Fincayra with the flowering harp.Instead he want to see his Mother Elen.This book was very good with a good plot and good story and it is just really good!

Wonderful in every way

Published by Thriftbooks.com User , 21 years ago
A worthy sequel to the "Lost Years of Merlin," the second book of this five-book classic cycle. TA Barron does not suffer from sequelitis, remaining fresh and original as ever.Merlin's ego begins to blow out of proportion in "The Seven Songs of Merlin." The blossoming wizard is entrusted with repairing the damage wrought by Rhita Gawr, a demonic creature who had ruled and ruined parts of the land, by using the magical Flowering Harp. But he chooses to neglect the duty assigned to him, in favor of attempting to bring his mother to Fincayra, the enchanted isle.But his use of power attracts the attention of Rhita Gawr, who send a fatal "death shadow" after him, that attacks Elen, his mother, rather than Merlin himself. Merlin is told that she has exactly a month to live, and that they must find the nature spirit-god Dagda to cure her. But only one mortal has ever found his way into the Otherworld: Merlin's long-dead grandfather, Tuatha. In a very st!irring and chilling scene, the long-dead wizard Tuatha speaks to Merlin and informs him that he must master the Seven Songs before he can meet Dagda and heal Elen. Desperate to save her, Merlin sets off to accomplish his mission within a month. Along the way, Merlin is accompanied by the forest girl Rhia and a new friend, a depressing jester and bard named Bumblewy.But before reaching Dagda to save his mother, Merlin must overcome a great deal, must learn immense wisdom, must make new friends and enemies, and may lose someone he loves dearly.Merlin is the same flawed hero as before, with a little more puffed-up-then-deflated ego now that he knows that he will be a powerful wizard. Rhia is the same irrepressable forest sprite, ready to pierce Merlin's ego when it needs a pinprick, and wise enough to see places where they will stumble. Bumblewy is slightly less interesting than the tiny giant Shim in book 1, but his success in making someone laugh and Merlin's re!action will send you rolling in the aisles.Barron's writing style is still fresh and descriptive, leavened with occasional humor and a new round of intriguing characters. It will be difficult to understand some references (Rhita Gawr, the Flowering Harp) if you haven't read Book 1--also, Merlin's evolution as a human being won't be as pronounced. So, read Book 1 and then read this! You will not be sorry...

Published by Thriftbooks.com User , 21 years ago
In this heartwarming story, young 13 year old merlin finds the soul of many valuble things in life .If you like Harry Potter I think you'll like this better!

Published by Thriftbooks.com User , 22 years ago
This is such an awesome book. It has a great author. I don't see how any one could not like T.A. Barron's books. They are so well written. Besides, were else are you supposed to read about Merlin's childhood? I don't know about any other places you can find a book about Merlin as a tenager that is a cool as this series. After reading this you should want to read his other books. If you don't you had better read the book again, because you didn't get the full effect. You might say this books is for 10 year olds, but I'm 15 and I love it.
Copyright © 2020 Thriftbooks.com Terms of Use | Privacy Policy | Do Not Sell My Personal Information | Accessibility Statement
ThriftBooks® and the ThriftBooks® logo are registered trademarks of Thrift Books Global, LLC