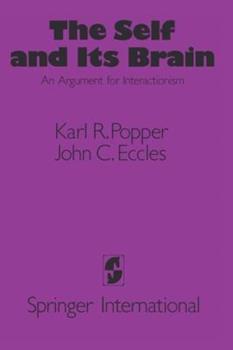 The Self and Its Brain

The problem of the relation between our bodies and our minds, and espe- cially of the link between brain structures and processes on the one hand and mental dispositions and events on the other is an exceedingly difficult one. Without pretending to be able to foresee future developments, both authors of this book think it improbable that the problem will ever be solved, in the sense that we shall really understand this relation. We think that no more...

About the origin of the free will

Published by Thriftbooks.com User , 12 years ago
Eccles and Popper are not alone in their strugle against established scienctific thinking, mostly based on the axioms of a materialistic aporach to reality. Dietrich Henrich is one of the most underrated philosophers of our times and needs to be mentioned here on the side of the two. I say so because he has the capacity to explain the issues of the most prominent German philosophers, especially in that case where some of their most imminent statements were ignored today by sheer false interpretation on the bases of wrong set axioms. Henrich is a purporter and adviser to understand the will as subject, not as a willful" object, as many materialists do. There are still a lot of them among brain- researchers who think according to the Credo of evolutionists. This is in contrary of what brain-researcher and Nobel prize winner John Eccles and Philosopher Karl Popper stated in union. For them the brains was nothing more than a piano on which the piano player Spirit played. Even Eccles had experiments which should prove, if not that there must be something like the non-material entity, that there must be the nonsense of a molecular-limited personality. Man is not a mere gathering of molecules, instead in first line an acting personality. The molecules serve at last this purpose and lack self-purpose. The same goes for the brains. It is nothing more than an organ. It is not what makes man. Meanwhile there are many such experiments with the same result. The brains is capable of much, but not everything. For Popper, Eccles and Henrich it has been clear that the Thinking, if it wants to conceive itself as originating from material, contradicts its own existence. Worse than that these commitments in thinking lead to chaos, from which it stems thanks to evolution. But by far not all brain-researcher share this opinion. For Popper, Henrich and Eccles and presumably most normal thinkers it is difficult to understand how one can cling to theories when the facts contradict. That is also true for interpretation of data from experiments. For example in one test the probates had to press the keys of a computer keybord at their own will. They were free to choose whatever key they liked. It could be expected that in case of a pure materialistic procedure of the sense registration and sense processing it would at first start with an activity of the brains because of the activating of the will to press a certain key. Next would follow the pressing of the key and the feedback of the senses hat the pressing was done, accompanied by the activity of the brains to process the information. Astonishingly it has to be stated, that only after the pressing of the keys, or better after the decision of the will of the probate to press the key, there was any brains activity. Everybody would take this as hint, that the will of man is not at all at home in the brains, but in a spirit that can not be found or proved in a material world with material means. Already the popular
Copyright © 2020 Thriftbooks.com Terms of Use | Privacy Policy | Do Not Sell My Personal Information | Accessibility Statement
ThriftBooks® and the ThriftBooks® logo are registered trademarks of Thrift Books Global, LLC