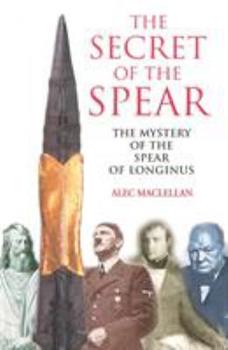 Just like the Holy Grail, the Spear of Destiny has become legendary and has proffered a wide range of stories, myths and claims, most of which are rather fanciful. This book offers a survey of the supposed origins and complex history of the spear as it appears at Christ's crucifixion and later in the hands of the emperor Constantine, Charlemagne, Napoleon, Adolf Hitler and Churchill. The spear that now lies in the Hofburg Museum in Vienna was supposed...

Published by Thriftbooks.com User , 15 years ago
According to The Gospel of John (chapter 19, verses 28 through 37) in the New Testament, as Jesus Christ hung on the Cross a Roman centurion pierced His side with a spear. Variously called the Holy Lance, the Spear of Christ and the Spear of Destiny, this strange relic has been written about in novels and non-fiction books, in many languages, for nearly two thousand years. Besides being the name of a heavy metal rock band from the UK, the Spear of Destiny has also appeared in at least two comic books: "Indiana Jones and The Spear of Destiny," and "Hellblazer;" and was a principal plot device in "Constantine," the 2005 major motion picture from Warner Brothers, directed by Francis Lawrence, staring Keanu Reeves. The most important non-fiction books in English are, in chronological order: "Spear Of Destiny: The Occult Power Behind The Spear Which Pierced The Side Of Christ," by Trevor Ravenscroft (1973); "Hitler's Ashes -- Seeds of a New Reich," by Howard A. Buechner (1988); "Adolf Hitler And The Secrets Of The Holy Lance," by Howard A. Buechner (1989); "Mark Of The Beast: The Continuing Story Of The Spear Of Destiny," by Trevor Ravenscroft and Tim Wallace-Murphy (1990); "The Secret of the Spear: The Mystery of The Spear of Longinus," by Alec MacLellan (2005); "SECRETS OF THE HOLY LANCE: The Spear of Destiny in History & Legend," by Jerry E. Smith & George Piccard (2005). I found Trevor Ravenscroft's "The Spear Of Destiny" a fascinating but ultimately disappointing read. If you are looking for verifiable facts about the lance that pierced Christ's side don't waste your time or money here. The vast majority of this book is conjecture and the few facts he bothers to include are often wrong. I found this out the hard way while trying to verify his "facts" for my own book on the Spear of Destiny, "Secrets of the Holy Lance," which I co-authored with Operation Paperclip/CIA expert George Piccard. Ravenscroft claimed that his friend and mentor Dr. Walter Johannes Stein would have written "The Spear Of Destiny" if he had lived long enough to do so. Curiously, several persons who said that they too were friends and associates of Dr. Stein deny Ravenscroft's claimed friendship with Dr. Stein, saying that they but once, and then only for an hour. Since Ravenscroft's death from cancer in 1989 there has been an international debate over how much of his book was actually written from hard facts and how much he simply made up. In retracing his steps George and I found that, when we could locate and verify the facts, Ravenscroft was often in error. Not being disposed to speak ill of the dead we only comment on this in our book in a few passages where it seemed important enough to set the record straight, as in when and how the US actually took possession of the artifact now housed in Vienna after the fall of Nuremberg in 1945. Ravenscroft begins with telling you that World War II was a wizard's battle, one between white-magic-using occultists w

Published by Thriftbooks.com User , 16 years ago
Walter Johannes Stein was a very interesting man. He worked behind the scenes during World War II as an advisor to Winston Churchill and also Franklin D. Roosevelt. An expert in the occult goals of the Third Reich, he raised the consciousness of two nations concerning the Elite underbelly of the occult world. This book provides more information and insight into the life of Stein than does his biography, as a perspective by those who knew him after the war. It is a fascinating read that I highly recommend, if you have interests in this subject.
Trustpilot
Copyright © 2022 Thriftbooks.com Terms of Use | Privacy Policy | Do Not Sell My Personal Information | Accessibility Statement
ThriftBooks® and the ThriftBooks® logo are registered trademarks of Thrift Books Global, LLC