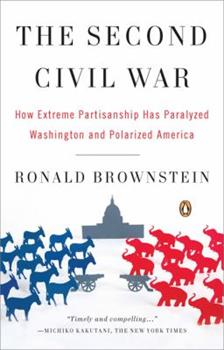 The Second Civil War: How Extreme Partisanship Has Paralyzed Washington and Polarized America

In recent years American politics has seemingly become much more partisan, more zero-sum, more vicious, and less able to confront the real problems our nation faces. What has happened? In The Second Civil War , respected political commentator Ronald Brownstein diagnoses the electoral, demographic, and institutional forces that have wreaked such change over the American political landscape, pulling politics into the margins and leaving precious little...

Published by Thriftbooks.com User , 13 years ago
Why is is so difficult for Congress or the President of the United States to get anything done? Why is it that our elected leaders cannot tackle so many of the deep and important challenges facing the nation? Journalist Ron Brownstein attempts to answer these important questions in this provocative and illuminating book. Full disclosure: I know the author. We both covered national politics, he for the Los Angeles Times and I for Reuters in the 1996 and 2000 presidential race. We were friendly but and not personal friends, although, I deeply respect his judgment and talent. Brownstein argues that partisan politics have become so bitter, toxic and divisive that neither party has any interest in cooperating with the other even when the national interest demands it. Both parties have become beholden to their political bases which have become bitterly antagonistic, professing loyalty to widely divergent cultural values. Yet, in order to get anything done, it remains necessary to build bipartisan coalitions. It may be possible to narrowly win elections based primarily on energizing the base, as Bush did in 2004, but when important national challenges loom, a president who has not reached out to the other party invariably finds it impossible to govern effectively on the shaky basis of such a narrow majority. In an exhaustive historic review, Brownstein goes through previous periods of American history. The Republicans from the 1890s to 1929, governed in a similar way -- and were turned out of power after they were blamed for the Great Depression for decades. In the 1940s and 1950s, both sides reached out more to the center, forming bipartisan coalitions. In those days both parties were much more diverse than today. There were southern Democrats who were more conservative than many Republicans and moderate Republicans more liberal than many Democrats. Was this a golden age of bipartisan cooperation? Hardly -- the southern Democrats were mainly concerned with preserving their racist, exclusionary Jim Crow society. In analyzing our current predicament, Brownstein puts most blame on the Republicans -- Gingrich, Tom DeLay and the Bush-Karl Rove team who set out deliberately to exclude Democrats from power and to rule for the benefit of their own narrow segment of society. Democrats, in order to survive, had to respond in kind and themselves have become tougher, less willing to compromise and more interested in frustrating the other side than cooperating to do the nation's business. But history teaches that a party that governs for the benefit of the few eventually awakens the wrath of the many. The pendulum always swings -- as it is about to do again. For more about me and my latest book The Nazi Hunter: A Novelgo to www.alanelsner.com.

Published by Thriftbooks.com User , 13 years ago
A great book that is rather right down the middle. It does a great job of covering the history of politics back to the early 1900s while still focusing on the recent dynamics. Clearly a lot of Bush and Clinton references but it does a good job of removing bias. A definite eye-opener.

Published by Thriftbooks.com User , 14 years ago
Though I've long studied American history as a layman, I learned so much from this book. Brownstein gives an overview of politics and the parties over the last 110 years, and upends a lot of my preconceived notions. The book is meticulously researched, and Brownstein convincingly proves his case- that never before in modern American history have the parties been so divided, yet so equal in support and numbers. This book is additionally recommended because of Brownstein's lack of bias, portraying the positives and negatives of both parties, but mostly preaching that strong adherence to party has been to the detriment of our nation.

Published by Thriftbooks.com User , 14 years ago
Ron Brownstein does a masterful job of describing the nature of partisanship and bipartisanship in the US Congress from 1896 to the present. He describes the situations and attitudes that led to the extreme partisanship from 1896 to 1932. He consistently lauds bipartisanship in the making of public policy but he also describes the splits in the majopr parties that made bipartisanship both possible and necessary. I disagree with his present analysis of the need for, and desirability of, bipartisanship today. Nonetheless he does a masterful job of describing the present basis for the present extreme partisanship which he decries. His recommendations for a more bipartisan approach to policy making makes a lot of sense. I just think that the country is moving more to a realignment than he thinks. I strongly recommend that anyone interested in the present, unhealthy gridlock read this book.

A sober look at a century of politics

Published by Thriftbooks.com User , 14 years ago
Ronald Brownstein's new book, "The Second Civil War", offers up much to be digested in history, calculation, process and outlook. The author, a distinguished contributor to the national political scene, has studied American politics from McKinley to Bush. We seem to be right back where we started from, with a mid-twentieth century romp through bipartisanhip. Brownstein's book is a fair comparison of how the country felt and voted at any given time since 1896. The era from McKinley to Hoover more or less matched the hyperpartisanship of today, while FDR's time through the 1980s allowed for compromise and historic legislation. While this is a comprehensive work of age-old politics, it's really more about the last fifteen years....the era of Clinton and "W". This is the part of "The Second Civil War" where Brownstein makes his mark and it's clear he has some distinct opinions. The Gingrich crowd, never a particularly likeable American flavor favorite, began the ball rolling in earnest toward a "take-no-prisoners" approach to Congress, heightened only by the intense partisanship of the Bush presidency. In so many words, Brownstein points out that because of this, we've lost more than we've gained and it will take years of rebuilding to set things straight. He's right, of course, and I kept wondering while reading this book if we've really hit the political nadir just yet in America. I highly recommend "The Second Civil War" for its insight and depth. Ronald Brownstein has done a remarkable job in putting this book together and it should be read by all who have a serious interest in American politics and those who care about where this country might be headed in that regard.
Copyright © 2022 Thriftbooks.com Terms of Use | Privacy Policy | Do Not Sell My Personal Information | Accessibility Statement
ThriftBooks® and the ThriftBooks® logo are registered trademarks of Thrift Books Global, LLC