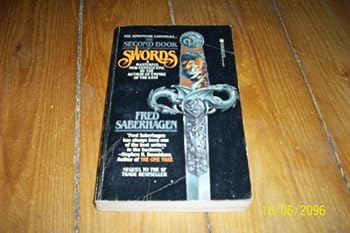 The Second Book of Swords

Mark and Ben travel deep into the Blue Temple's hidden horde of treasures in an attempt to recover gold and Swords for Sir Andrew. Gods, demons and human traitors have other plans for the Swords and... This description may be from another edition of this product.

Published by Thriftbooks.com User , 11 years ago
Usually the second book in a trilogy - the book to "bridge the gap" - tends to be ... shall we say, not quite up to the par of the first and third books. This is not the case in this instance. In "The Second Book of Swords," five years have passed, and while Barbara has been traveling with a carnival, Ben has chosen to sign up with the Blue Temple for service and Mark has wandered off who-knows-where in his quest to find ways to help fight against the Dark King. Early in the book they all reunite and, with Ben's urging, they decide to try to rob the Blue Temple's treasure hoard, which Ben guarantees has at least one Sword. Along the way they run across another treasure hunter - the Baron Doon - with whom they continue their quest, minus Barbara, who goes her own way. While The First Book of Swords was a fairly simple plot with flat characters and brisk movement, Saberhagen took more care to building his characters in this text, while at the same time maintaining a fairly tough pace. I was personally pleased by this, as I like to know a bit about the characters in the stories I read. Overall I am pleased with the trilogy so far and have made a note to myself to go and seek the rest of the books set in this world (there are certainly a lot of them!). If you are a fan of the sword and sorcery genre of fantasy (with a bit of a twist), definitely spend the time it will take to find these very fun books.

a mixture of magic and mythology [no spoilers]

Published by Thriftbooks.com User , 17 years ago
"The Second Book of Swords" is the second novel in "The Book of Swords" trilogy approximately five years following the prior book. It has an interesting storyline involving an assortment of deities supplemented with a variety of creative magical weaponry. The book splits time between Ben, Mark, and Baron Doon. I find Mark a more engaging personality and am mildly disappointed Ben dominated the storytelling even though he is a decent character. The enigma of Baron Doon helps build suspense throughout but some of my favorite characters, Sir Andrew and Draffut, make only brief appearances. An amazing ending, confirming if the swords can destroy a god or goddess, leads to what should be an exciting final novel. I do not care for the mixture of Greek and Roman names for the gods and goddesses, I would prefer to stick with one mythological theme. A detailed map of the significant terrains would have been useful. I would recommend this series to any fan of the fantasy genre. Thank you.

Part of one of my most favorite trilogies

Published by Thriftbooks.com User , 17 years ago
This is the second book in Saberhagen's classic Swords Trilogy.... I re-read this trilogy at least once every other year because I can never enough of it. Once you pick the book up, you won't be able to put it down, so plan on having many sleepless nights.

Published by Thriftbooks.com User , 21 years ago
I totally agree, I had my whole series stolen, and trying to re-build is proving very frustrating, with only being able to get part of the series! If you are going to re-print then do all the books. The UK site doesn't even list half of them

This series of books are tremendous.

Published by Thriftbooks.com User , 22 years ago
Saberhagan captures the imagination of all with his god forged swords
Copyright © 2022 Thriftbooks.com Terms of Use | Privacy Policy | Do Not Sell My Personal Information | Accessibility Statement
ThriftBooks® and the ThriftBooks® logo are registered trademarks of Thrift Books Global, LLC