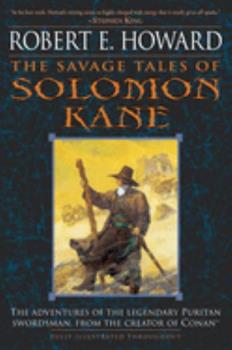 The Savage Tales of Solomon Kane

With Conan the Cimmerian, Robert E. Howard created more than the greatest action hero of the twentieth century--he also launched a genre that came to be known as sword and sorcery. But Conan wasn't the first archetypal adventurer to spring from Howard's fertile imagination. "He was . . . a strange blending of Puritan and Cavalier, with a touch of the ancient philosopher, and more than a touch of the pagan. . . . A hunger in his soul drove him on and...

Published by Thriftbooks.com User , 17 years ago
As the greatest writer of yarns of pure adventure, Howard's stories are excellently paced and never drag. They grab you by your throat upon the first page and don't let go. Solomon Kane is one of the more likeable characters from Howard's typewriter. Like Conan, he is a praeternaturally strong fighter. There's just enough psychoanalyzing in here to make him interesting. Kane is a "Puritan," but Kane's Puritanism means in essence that he imagines himself the instrument of God's predestined vengeance upon the unworthy and unholy, that he might "ease them from their lives." In the grip of a grim wanderlust, he is the kinsman of the Wandering Jew, or of Melmoth the Wanderer. His determination is not for his own sake. Unlike Conan, he is driven by more than a will to survive; he is doing the Lord's will. I suspect that Kane is less well known than Conan largely because many of Kane's tales take place in the Africa of pulp fiction, full of witch doctors and violently sensual tribal empresses. This sort of thing makes people in the twenty-first century understandably nervous. The daintily politically correct will not have the stomach for this, and people with a jaundiced eye towards racial politics are sure to find many faults; but then these people are unlikely to get a taste for classic pulp adventure. It isn't as bad as you fear in any case. Kane's righteousness is such that he willingly unsheaths his sword in defence of Black people as White: this redeems Kane from the worst accusations that could be laid at his charge. The illustrations are nicely done in an appropriately classical style. Howard's prose is presented without serious editing or tinkering, and the apparatus notes any serious variations.

High Adventure with the Puritan swordsman

Published by Thriftbooks.com User , 17 years ago
Robert E. Howard is most famous for his character Conan. However, Howard was writing adventure characters long before Conan. Among the more popular of these is his English Puritan swordsman, Solomon Kane. Kane is definitely an interesting character. He shares certain traits with Conan, including fighting skill, a love of adventure, and a nefarious past. Unlike Conan, Kane is a far more righteous in his motivations. While Conan was never evil, he was definitely a man who allowed himself to be ruled by his passions. He did what he believed necessary for his survival. If that happened to be the right thing, so much the better. If he engaged in thievery (which he often did), he did so without hesitation. Kane's passions are more submerged, obscured by his hatred of what he believes to be "evil". He hunts murderers, thieves, and demons because he wishes to inflict punishment on them. The tales found in this volume are all terrific. While some are better than others, not once did I feel like I had wasted my time upon reaching the end of a story, which is always a possibility while reading an anthology. Howard's imagery is vivid, as Kane chases ghosts and fights duels in England, and pursues French bandits, evil kingdoms, and flying monsters in Africa. The stories are by turns funny, exhilarating, chilling, and creepy, and always satisfying. While Howard's prose had its "purple" moments, he never takes the reader out of the story by overwriting. The only real complaint I have with this volume is aimed at its editors. The first Conan collection included a couple of essays that examined how Howard created Conan, the nature of Conan cycle of stories, and general insights into Howard's state of mind. "Solomon Kane" has no such essays. This is unfortunate, as some of the stories in this volume are unfinished fragments, without any explanation for why Howard never finished them. Some insight into why Howard departed slightly from his more usual "barbarian" approach with the Puritan Kane (although, the "Anglo-Saxon Barbarian" is always just below the surface) would have been nice. However, this is a minor concern that in no way reduces enjoyment of this volume, or its rating. It is excellent.

Published by Thriftbooks.com User , 17 years ago
Solomon Kane... pious servant of God, adventurer, death dealer. Evil must perish from this earth, and with a curse an oath to God was sworn. It is his quest and his curse. These aren't your typical good versus evil stories. They contain within them, for those willing to look, the characteristic complexity, and hypocrisy, of human nature that is found throughout Robert E. Howard's body of work. Solomon Kane battles men, monsters, sorcery... and himself.The Solomon Kane stories broke new, artistic ground on many levels, but perhaps the most significant breakthrough dealt with what Robert E. Howard is most known for in modern times... the father of the literary genre Sword and Sorcery. The Solomon Kane stories were the first modern Sword and Sorcery, and Kane the first Sword and Sorcery character (published in 1928). These stories blended for the first time historical advetnure, fantasy, and supernatural horror in modern prose. Not only excellent stories, but the first of their kind. Highly recommended.

Savage Writing at its Best.

Published by Thriftbooks.com User , 17 years ago
Long before Robert Howard conceived of Conan there was Solomon Kane. A Puritan Englishman from the 16th century, Kane wandered the earth with no particular destination in mind but where God should send him. Like all of Howard's characters, Kane is an adventurer, but unusual in that he sees himself as a tool of God's justice. And it is a very Puritanical God indeed that Kane serves. This is not a God of mercy but one who destroys all evil in His path, using Solomon Kane as his tool.I must confess that I like these stories even more than the Conan tales. Solomon Kane is a driven character with a brooding personality I find more appealing than Conan. This book contains all the published stories about Kane and six previously unpublished manuscripts from the Glenn Lord collection. As with the other Robert Howard books published by Del Rey, this one includes superb illustrations. The frontspiece by Gary Gianni perfectly captures Kane's grim visage.Anyone who enjoys reading the old pulp adventure tales should get this book. Howard was a true master of the genre. The stories, poetry, and essay on Howard by H.P. Lovecraft are all great reads now just as when they were first published. My favorite pieces are the fragment "Castle of the Devil," "Rattle of Bones," and the poem "The One Black Stain" which places Kane with Sir Francis Drake. But you can hardly go wrong with any part of this book.

The creator of CONAN brings you a Swashbuckling Puritan!

Published by Thriftbooks.com User , 17 years ago
"The Savage Tales of Solomon Kane" collects together all the unedited, original stories and poems about the puritan adventurer and fantasy hero Solomon Kane. Author Robert E. Howard (1906-1936) created many classic fantasy heroes in the pulp magazines of the 1920s and 30s, such as Conan the Cimmerian, and Solomon Kane is one of his most unique and intriguing creations for modern readers. Solomon Kane appeared in "Weird Tales" Magazine, and his stories combined swashbuckling adventure with supernatural horrors. Howard describes Kane as a "fanatic," who is called by God to travel the world destroying evil. Kane is compulsive, obsessive, grim, and will NOT be swayed from his quest. He encounters sword-swinging villains, vile black magic, and hideous creatures as his wanders the globe in his ceaseless crusade. If you haven't heard of Solomon Kane, buy this book immediately and fall into a world of action, horror, history, and the fantastic -- all centered on this vengeful and driven Puritan swordsman of the late 16th/early 17th century. The stories are presented un-edited, which means the inclusion of many racial stereotypes and attitudes prevalent in the 1920s and 1930s. This paperback is a reprint of an expensive limited-edition hardback. Aside from the stories themselves, it includes all of Howard's unfinished fragments. Earlier editions had author Ramsey Campbell finish these incomplete stories, but I prefer to read them exactly as Howard left them. Fabulous black and white illustrations by Gary Gianni adorn almost every page, scattered around the borders of the text, with an occasional full-page illustration. Gianni has an unerring eye for period detail, and his envisioning of Solomon Kane is dead-on. For the reference of new readers, the editors include two essays on Howard's life. First, a memoriam written by H. P. Lovecraft (who corresponded with Howard for years) on the occasion of Howard's suicide in 1936. Second, scholar Rusty Burke provides a short but information overview of the Howard's life. For the extremist, there is also an appendix of textual notes on the stories. Here are the stories, fragments, and poems you will find inside...SKULLS IN THE STARS: Solomon Kane finds a wraith-like monster guarding a lonely road in rural England. A short spooky tale; a good introduction to the character.THE RIGHT HAND OF DOOM: A condemned wizard seeks revenge on the man who betrayed him. This is very short piece, more like a vignette, and Kane has only a small role in the story. RED SHADOWS: (Originally published as "Solomon Kane") Kane vows vengeance against a bandit who killed a girl, and chases him into Africa, where he encounters sinister magic and furious swordplay. A real mini-epic, with Howard's word magic at its best.RATTLE OF BONES: In the Black Forest of Germany, Kane finds a mysterious inn with a hideous secret. A fine, short horror piece.CASTLE OF THE DEVIL: (Fragment) Solomon Kane decides to investigate a tyrannical baron. Only four p
Copyright © 2020 Thriftbooks.com Terms of Use | Privacy Policy | Do Not Sell My Personal Information | Accessibility Statement
ThriftBooks® and the ThriftBooks® logo are registered trademarks of Thrift Books Global, LLC