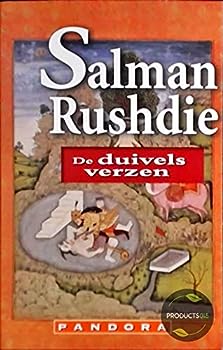 This description may be from another edition of this product. #1 NEW YORK TIMES BESTSELLER - " A] torrent of endlessly inventive prose, by turns comic and enraged, embracing life in all its contradictions. In this spectacular novel, verbal pyrotechnics barely...

Published by Thriftbooks.com User , 20 years ago
On the evening of September 10, 2001, the acclaimed, or is it notorious, British-Indian author of The Satanic Verses, Salman Rushdie, came to Houston to read from his latest work. A small crowd of Ayatollah-following extremist protesters picketed outside the Alley Theater. If that is all they're up to now, I thought, perhaps we've heard the last of the jihad, the fatwa and the Islamic crazies. Little did I know what outrage awaited the next day.When I found The Satanic Verses in the book store, I thought, If this is a war of ideas, a war for the mind, then my own little personal protest will be to read what my enemy does not want anyone to read. It had not occurred to me before, because the fervor of the fatwa led me to believe Salman Rushdie's book was some sort of religious tract or angry political protest against Muslim fundamentalism, not a novel of brilliant imagination, sensual metaphor and lyrical poetry.It is a story of India and Britain, and the inevitable clashes between, brought on by their long, and turbulent history together. It is a story about personal identity, racial identity and religious identity. It is a story of damnation and redemption, love and betrayal, betrayal and forgiveness. But most of all, it is a story about people. Deep, colorful and live, full of passion, humor and questions for the Almighty. It is, in short, a human story, so well crafted, that anyone, even someone like me who has little experience with India or Islam, can relate to its message. Perhaps this accessibility is just what worried the Ayatollah Khomeni. By issuing his death sentence upon Salman Rushdie's head, he drew widespread attention and sympathy for a talented writer who might otherwise have gone unnoticed outside his own circle of interest. Khomeni also demonstrated what power mere words could hold over those who rule by the absolutism of ideas. "What does a poet write? Verses. What jingle-jangles in Gibreel's brain? Verses. What broke his heart? Verses and again verses."Rushdie's criticism for the religion of Islam/Submission, as spread by the Prophet Mohammed/Mahound, is sharp, angry and completely unapologetic. He even goes so far as to suggest that Mahound invented a lot of the "rules" of this religion for the sake of convenience, or compromise, in businesslike fashion,for the more successful spread and maintenance of power of the Idea and its officials.Throughout the story, Rushdie asks the question, Where are the words, or verses, attributed to God/Allah really coming from?"All around him, he thinks as he half-dreams, half-wakes, are people hearing voices, being seduced by words. But not his; never his original material. - Then whose? Who is whispering in their ears, enabling them to move mountains, halt clocks, diagnose disease? He can't work it out."No wonder Khomeni was afraid. One amusing thing is that Rushdie was clearly aware of the danger he was creating for himself by writing and publishing his opinions."'And now Mahound is comin

Published by Thriftbooks.com User , 21 years ago
An incredibly original and creative novel.Many readers have been drawn to this novel by the provocative controversy which surrounds it. If you're reading Satanic Verses looking for a shocking denouncement you will likely be disappointed. Unless you're a scholar of the Islamic faith you likely won't understand what all the fuss is about. I read this novel over ten years ago and have re-read it in bits and pieces many times since. Aside from the imaginative interwoven plot the most compelling feature of Verses is Rushdie's amazing lyrical writing style. Love him or hate him Rushdie is undoubtedly one of the most brilliant authors writing in the English language, and practically every section of prose could be enjoyed on it's own independent of the story. There is more word-play and double meanings is Verses than you could find in a dozen readings; every time you read a chapter you'll find something new. Aside from a general interest in the various religions of the world I profess no great knowledge of the Koran, therefore undoubtedly there is symbolism in Verses that I missed/didn't understand. Some elements of this book that won't be accessible for the lay reader. But based purely on its creativity and masterful prose this book is a worthwhile, entertaining, and challenging read.(A background note: Satanic Verses was the first Rushdie novel I read, and I promptly fell in love with his work. I subsequently read The Moor's Last Sigh and East West, and promptly feel right back out of love. Satanic Verses was the novel that Rushdie was born to write; in his lyrical prose, humor, and surrealistic mix of realism with the fantastic he creates an amazing work of art. Nothing he has written comes close. Unless you're a die-hard Rushdie fan, a scholar of Indian society and the interrelation between East and West simply read this novel and skip the rest.)

Published by Thriftbooks.com User , 21 years ago
The Satanic Verses has been dubbed (amongst many other things!) `the most famous book most people will never read'. If true it's is a real shame, because at the centre of all the extreme opinion that surrounds the book, the condemnation, acclaim and analysis, is an incredible and accessible novel far greater than the sum of its few controversial parts. Gibreel Farishta and Saladin Chamcha `crash land' together in England from India and are both profoundly transformed by the experience. Farishta begins to develop an angelic halo, while Chamcha metamorphoses into a cloven-hoofed devil complete with horns and bad breath. Both men suffer, in different ways, the brutality and indignity of their transformations in Rushdie's evocation of a tense and brooding London. Ultimately it is the `demonic' Chamcha who finds fulfilment by returning to India, the `angelic' Farishta is not so fortunate. Merging fantasy and reality, Rushdie uses the subversive excesses of `magical realism' to explore the demands of migration and how those demands can destroy the fragile assurances of identity and belonging most of us take for granted. Farishta is haunted by the nightmares of his lost Muslim faith, Chamcha by the impossible dream of reinventing himself as an Englishman. Through these and the experiences of other often outrageously conceived characters, Rushdie reflects on how people suffer, and are made to suffer, for the sake of a little certainty. If it all sounds a little heavy, don't be put off. Above all this is a great piece of story-telling, funny, extraordinary and completely absorbing. Rushdie works his usual narrative magic, writing on a grand exuberant scale that takes in everything from sex and death to flying carpets and hot wax, but also the delicate intimacies of desire and despair. Poignant and staggeringly imaginative, The Satanic Verses explores continuing cultural obsessions with purity and stability in a world increasingly lacking in either.

One of the great books of the century

Published by Thriftbooks.com User , 22 years ago
For anyone who likes literature as literature (as opposed to entertainment and good clean fun) S.V. is for them. It isn't any easy book, in the beginning. The dialect takes some getting used to, and the jokes are subtle and easy to miss. The first time I read S.V. I had to read the first chapter aloud... and slowly. But from the first 'Everest' reference about the aircraft's altitude when the explosion occurred (was it really 27,000 ft, or 27,002?) the themes of S.V. revealed themselves. Truth vs. falsehood, certainty vs skepticism, the fanaticism of received faith vs. self doubt all receive treatment that isn't typical outside of required reading in college. Nevertheless, S.V. is exciting and worthwhile. One of the pleasures of a close reading of S.V. is to notice the influence of other writers - both their voices and their themes - in Rushdie's writing. Gabriel Garcia Marquez is in evidence, as is Kurt Vonnegut. But Rushdie's voice is his own, even if it is sometimes something of a collage. Regarding the controversy: Even without an understanding of the Islamic issues, it is easy to understand how revolutionary Iranians could be upset by the book. The unflattering description of the exiled Ayatollah had to strike a nerve with followers of the Ayatollah Khomeni. Was Rushdie intentiionally playing with fire? Also, the whole story of the relationship between the 'angel' Gibreen and Mahound brought up some suspicious issues... like those surrounding the orgins of many faiths. That said, however, maybe we can keep in mind the justice meted out by the author himself. (But here I will keep silent... let the reader read it for her/himself). And before reacting to the stories, maybe the POINT of the stories should be kept in mind: At the bottom of every belief there are grounds for doubt. While not necessarily discrediting belief, these grounds are a rational check on action. Wtihout questioning all of received revelation, maybe we each should question the lights illuminating our own understanding of revelation? So before I choose to blow up an airliner, for instance, or lead a flock of believers into the sea, maybe I should question the source of that light. Satan is an angel of light, as well as a liar (as we say here in the South). So maybe we should act (or refrain from acting) with that in mind. That is one of the main points I got out of S.V.

The Satanic Verses Mentions in Our Blog