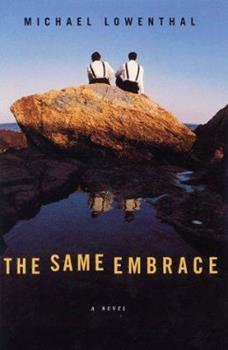 Once, in sleep, identical twins Jacob and Jonathan Rosenbaum breathed in perfect rhythm - a bond that seemed unbreakable as the convictions that now divide them as adults. At 24, Jacob is a gay... This description may be from another edition of this product.

Published by Thriftbooks.com User , 20 years ago
Reading this again four years after I first read it, I'm still amazed at the scope and impact of the story. "The Same Embrace" centers on Jacob, gay and Jewish, whose twin brother Jonathan has embraced Orthodox Judaism and now lives in Israel. While mostly about the struggle of the two brothers to reconnect after years apart, the book also deals with the legacy of the Holocaust, the impact of family secrets, and the essence of family. For me though, it is the story of the two brothers that resonates so clearly and brilliantly. And by having the brothers be so similar and yet so different, Lowenthal presents the reader with a fascinating portrait of what could almost be two halves of a whole: one man trying to bring together his sexuality and his religious beliefs. Even without this context in mind (whether it's intended or not), "The Same Embrace" is a marvelous, insightful, and ultimately joyous story that expands past the genre distinctions of Jewish fiction and gay literature to a wholly American novel of family.

Couldn't put it down.

Published by Thriftbooks.com User , 20 years ago
Now this is a good book. I don't share Lowenthal's perspective, so hopefully it's of some value that as a "general reader" I found this an utterly compelling read. He holds his own with my favorite classic novelists.

I know I'm Not The Only Gay Jew

Published by Thriftbooks.com User , 22 years ago
As a gay jewish man who grew up outside of Boston, what can I say...I LOVED THIS BOOK! Okay, I am an only child, and this work centers on two twin brothers, not something I thought I could relate too, but the basic emotions and search for love and acceptance cut through that. Narrated by Jacob, the gay brother, we learn about teh close bond he shares with his brother Jonathan. ALthough they look alike, they are very different. In the end, Jonathan transforms from a party boy teen, to a devout Orthodox Jew in school in Jerusalem. Jonathan can not accept his brother's homosexuality, and it made me wonder if he turned to religion in suppression of his own homosexual desires? Jacob sees he and his brother begin to grow apart intheir teens, and it is upsetting him.What was revealed about the family's history in WWII in Nazi Germany shocked me, and that was when the book really kicks in. Jacob learns about an Aunt who was shunned by his Grandparents and I was completely thrown over!This is a must read for any gay jew out there. And if you have ever been curious about jewish religion and history, regardless if you are gay or straight, I believe you will throroughly love this book!

Published by Thriftbooks.com User , 23 years ago
Identical Jewish American twins distinguish themselves by going in opposite directions - Jacob Rosenbaum is a gay activist and sensual playboy while Jonathan becomes an Orthodox Jew and scholar in Israel. Interestingly enough, the parents of these prodigies are troubled by the choices of both their sons. This is an excellent study of the two sides of the Jewish religion as well as the twins who are the central characters. - the compassionate, all-encompassing humanism of one interpretation and the hard, one-dimensional prejudice and hatred of another perhaps fundamentalist interpretation. I love this book for its courage in comparing the hard, unyielding and judgmental Jews like Papa Isaac, the rabbi grandfather of the twins to the cruel, hard judgmental Nazis who hound him and his family. There are some graphic homosexual love scenes but, after all, why not? The compassionate side of Judaism can envision love as the conjunction of the sexual and spiritual spheres.

Published by Thriftbooks.com User , 23 years ago
What I most enjoyed about this book was it beautifully told of a relationship between a gay brother and a straight brother. As the two were trying to discover some common ground after all they'd gone through as kids and so far as adults, I felt a resonance with my own life. There's no guarantee they'll ever become close, but they just might try anyway. It reminded me somewhat of the movie "In the Gloaming" where I wanted to get back in contact with my family. Another reading of the twin brothers is that it's two aspects of one mind trying to figure itself out. It's like the gay side of the brain is conversing with the side that was brought up to believe that being gay is wrong and the only life is through strict religion. I'm sure there's more levels that that could take, too.
Trustpilot
Copyright © 2022 Thriftbooks.com Terms of Use | Privacy Policy | Do Not Sell My Personal Information | Cookie Preferences | Accessibility Statement
ThriftBooks® and the ThriftBooks® logo are registered trademarks of Thrift Books Global, LLC