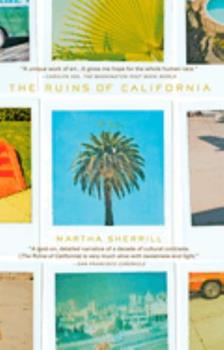 The Ruins of California

For the Ruin family in 1970s California, as described by the precocious young Inez, life is complex. Her father, Paul, is self-obsessed, intrusive, and brilliant. He's also twice divorced, leaving Inez to bounce between two worlds and embracing neither-that of Paul's bohemian life in San Francisco and the more sedate world of her mother Connie, a Latin bombshell who plays tennis and attends EST seminars in the suburbs. As Inez progresses through high...

Forever Young, and Other Myths of the 70s

Published by Thriftbooks.com User , 15 years ago
Before I read The Ruins of California, my understanding of those who reached middle age in the 1970s was framed by John Cheever. Their mid-life crises involved late night drinking-and-dialing to old college pals and lovers. Getting soused and crashing your neighbors' suburban swimming pools. With elegant writing and fine dialogue, Ms. Sherrill has produced a novel which expands my thinking about this liberating--and debauched--time in my parents' generation. The book covers familiar ground--a girl's coming of age, a daughter-father relationship--in a refreshing and highly-entertaining way. Inez Ruin splits time between her divorced parents' lives. She lives with her est-fulfilled mother and grandmother in a house in Van Dale, a Southern California suburb, where her bedroom is pink and all her friends go to church. To visit her gorgeous, brilliant and promiscuous--and egocentric, and self-indulgent, and wealthy--father, Inez regularly flies north to San Francisco, land of afros and patchouli, "passing from mother to father, a baton of a girl flying in the distance between hands." I lost count of Inez' father's girlfriends, as Paul Ruin pursues the intoxication of new love, over and over, all the while over-indulging his two children with expensive gifts and exhortations to lead free lives, to not sell out. When his son skips college, Paul declines to intervene, justifying his inaction with the thinking of the day: "'He's got to come to all big decisions on his own,' my father said. 'Or else he'll just blame me, or blame his mother, or, worse, he'll never learn how to make a big decision at all.'" The devastating consequences of this way of thinking are made starkly apparent by the story's end. As the author guides us through Inez' teen years, she recreates the thrills of girlhood crushes, breaking rules, that first car, and getting high. She also relates the unlikeable selfishness of teendom, without making us permanently hate Inez. I've read all three of Ms. Sherrill's books, and in my view this latest effort is her finest. I especially loved all the mentions of what made the 70s the 70s to a girl growing up then; bamboo back scratchers, Get Smart, Necco wafers, Corvairs, those pink, round vinyl Samsonite suitcases. What makes this book memorable is the ultimately gladdening portrait of a complex daughter-father relationship, a relationship which reaches a satisfying coda along with the decade: everybody eventually has to grow up.

Published by Thriftbooks.com User , 15 years ago
The Ruins of California is a must read. Smart and smooth, the book not only describes the 70's in California with fun detail, but takes you through the growth of a child lobbed between a bohemian father in San Francisco and a more rigid enviroment with an artistic mother in a staid part of southern California. Add on top of that some nutty cousins, a granddame of a grandmother and some great, well researched California background, and the books pages seem to turn themselves as you ride along with the main character Inez. One of the best books of this century!

Growing Up In The 1970's In California

Published by Thriftbooks.com User , 15 years ago
Ms. Sherrill has published three books : the non-fiction "The Buddha From Brooklyn" (2000) when she was still a reporter from the Washington Post; the novel "My Last Movie Star" (2003); and now her second fictional book, "The Ruins of California." As always, she has an eye for detail and for irony (the title contains at least two meanings) in her semi-biographical novel of her childhood and her larger-than-life father. Forsaking a straight-forward memoir of her eccentric family, she strives instead to capture the spirit of growing up in California after the 1960's and the spirit of her father instead of a accumulation of details. Quirky but readable, the father-daughter relationship is the heart of this book and one wonders how much is factual for Ms. Sherrill & how much is it the way she wished it could have been. A wonderful read on a time and a place and a family that has come and gone.

Yes, you really should read this book ...

Published by Thriftbooks.com User , 15 years ago
This is a beautiful, sad and moving novel about families and all that goes with them. The father/Paul character is funny, smart, pathetic, and utterly fascinating. Captures the 70's in all its messy glory. Her other book "My Last Movie Star" is quite good, too.

Move over Fitz and Tru

Published by Thriftbooks.com User , 15 years ago
This is a wonderful, heart-breakingly beautiful novel that puts the author, Martha Sherrill, in my pantheon of author/heroes. Today's review by the impeccable Carolyn See in the Washington Post (1/27/06) captures it far, far better than I ever could. She writes: "This book isn't for everyone, but I don't want to know the people it isn't for. This is for people with broken homes and smashed hearts and extraordinary bravery and gallantry and imagination. This novel is for those who love their families with a terrible love and prize filial piety above all things, even though that family -- and it's bound to be overextended -- appears bound straight for Hell in several different handbaskets. It's about practicing courage and manners and tradition even as Dad introduces his 17th girlfriend. Yes, it's about self-destruction, but it's really about love -- the real thing -- about how we get it and how we keep it. I'm crazy about 'The Ruins of California.' It gives me hope for the whole human race." Ditto Carolyn See. Brava Martha Sherrill.
Copyright © 2020 Thriftbooks.com Terms of Use | Privacy Policy | Do Not Sell My Personal Information | Accessibility Statement
ThriftBooks® and the ThriftBooks® logo are registered trademarks of Thrift Books Global, LLC