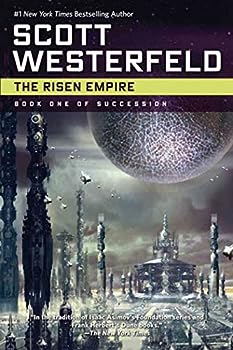 (Book #1 in the Succession Series)

This description may be from another edition of this product. From Scott Westerfeld, the acclaimed author of the Leviathan trilogy and the Uglies series comes a sweeping space opera, The Risen Empire , book one of the Succession duology. Captain Laurent Zai and...

Published by Thriftbooks.com User , 18 years ago
Risen Empire takes place in a well imagined distant future with fast paced action, an economy of words and well develped charecters. Most of the negative reviews were because the book was not advertised as a first in a trilogy, but I can easily forgive the fact given the quality of the story telling. Hope book 2 lives up to my expectations.

Published by Thriftbooks.com User , 18 years ago
In the far future, people wear nanotech uniforms that will each second reform themselves to the wearer's shape, pilots will "fly" vessels less than a millimeter in diameter, AI's will take over planet-wide information systems and devices and form a "compound mind", and cultures will war with each to death and destruction. All of this is semi-interesting in its own right and is handled extremely deftly in this work, but it still is standard science fiction. But also in the future? The dead will rule, empathy will be treated with drugs as a side-effect, and oh yes, one of the more interesting characters/narrators will be a house. This is poetry.While there was once a time when I read mostly science fiction, I long ago moved into fantasy when looking for lighter reading and while I still dipped into the pool now and then, I never was impressed enough to wade back in fully, though I sometimes found things I liked quite a bit (Dan Simmons' Hyperion series for instance). If I thought there were more books out there like this one, I'd throw on my goggles, suit, and fins and jump in for an extended stay. As mentioned, the science part of Risen Empire is smoothly handled--the jargon never gets in the way, the devices themselves and their application are fascinating, and it's all tied so tightly into what's happening that you never feel lost or confused in a sea of technological jibber-jabber. Even better than the science, though, is the human side of this novel. The political premise, that one empire, ruled by the dead--eternals tightly tied to the emperor who alone can grant that immortality--is slowly stagnating and is starting to face internal dissent by some of the living is wonderful. Politics and social analysis is given nearly as much space as the technology, and while some will find it mere digression slowing down the "operatic" parts of the space opera, I personally found it as or possibly more interesting. Even better are the human relationships, the main one between a senator fighting the emperor back "home" and the starship captain fighting for the emperor on a light-years away where the Emperor's sister has been taken captive.Westerfeld cuts back and forth among the attempted rescue of the hostages, the political maneuvering back at the Empire, and flashback scenes that flesh out the main characters' individual histories as well as their relationship's history. Again, some will be off-put by this structuring, wanting more "action". I think it heightened the suspense of the rescue mission, helped make the characters three-dimensional (all too rare in both science fiction and fantasy), and made for a more interesting and stimulating reading due to the fractured structure. Subplots abound in the story beyond the main story--the hostage crisis that is the opening move in the new war between the Empire and its old enemy the Rix--who seek to "seed" artificial compound minds on industrialized worlds. Along with the war, the reader is

Published by Thriftbooks.com User , 18 years ago
I love good Sci-Fi: books that realistically explore what humanity can and might build, and, more importantly, show the continual struggle to define what it means to be human, a struggle that no amount of technological sophistication can make lighter. This novel is most definitely "good sci-fi." Westerfeld weaves multiple complicated sub-plots clearly and elegantly. My only gripe is that nowhere on the jacket cover is it made clear that this is but the first in a series (it is). The second installment cannot come soon enough.

Published by Thriftbooks.com User , 18 years ago
This book is full of surprises. It starts out by putting you in a setting you think is familiar, and then with one sentence it puts the entire scene in a completely different context, eliciting a "What? Oh, wow!" response. There are many ideas we don't often encounter - a symbiant giving everlasting life after death, complex laws expressed as a sort of hologram facilitating understanding, the proposition that artificial intelligence is the natural state of a planet's electronic data flow and requires deliberate acts to supress, and much more.Such concepts are not nearly enough to glue me to a book, however. I found the characters very human and the protagonists entirely sympathetic. In addition, the politics invented in the risen empire are fascinating and entirely plausible. Westerfeld displays considerable thoughtfulness in analyzing and presenting the repercussions of the precepts upon which the book is founded. Human nature seems very well represented. All this together in one book makes a sort of masterpiece for me.Typically I don't enjoy this sort of science fiction, "space opera," but this book stands head and shoulders above the typical book of this type. In fact, I'd have to rate it as one of the most absorbing science fiction books I've ever read! It does end in a cliff-hanger, and I'm very glad the sequel is scheduled for release in October. I'd say get it now while the gettin' 's good, and don't waste any time time buying the sequel when it's available.

Published by Thriftbooks.com User , 18 years ago
It's so refreshing to read a space opera that zooms along full of adventure, battles, excitement, romance and disaster which is also witty and smart. At times it was hard to remember that it was a space opera. Yes there's an emperor (with a collection of dead cats and wacky theories about the influence of cats on human history) but he presides over a constitutional monarchy with a sophisticated and savvy senate. In fact, _Risen Empire_ is as much a political novel as it is a space opera. Economics, public opinion and party machinations send the plot careening along every bit as much as the emperor's shenanigans, military hardware and the love interest. I could not put this book down and am waiting with bated breath for volume two.
Copyright © 2020 Thriftbooks.com Terms of Use | Privacy Policy | Do Not Sell My Personal Information | Accessibility Statement
ThriftBooks® and the ThriftBooks® logo are registered trademarks of Thrift Books Global, LLC