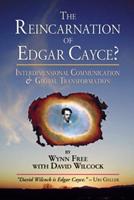 The Reincarnation of Edgar Cayce?: Interdimensional Communication and Global Transformation

by Wynn Free and David Wilcock

Wynn Free explores the remarkable parallels between the work of David Wilcock and the legendary Edgar Cayce while he builds a convincing case that the two men shared the same source of prophetic information and that Wilcock might indeed be Cayce's reincarnation. Compiling some of Wilcock's most inspirational and life-transforming prophetic guidance from his channeled Source, this book conveys profound insights into topics such as earth changes, secret...

Published by Thriftbooks.com User , 17 years ago
I picked up this book with some skepticism, as I'm an avid Cayce fan and hesitant to accept the claims of someone who asserts he is Cayce's reincarnation. While I still don't feel I can say for certain that I believe David Wilcock IS Cayce, I certainly find Wilcock plausible, mostly because the voice of Ra sounds a great deal like Cayce's Source. To Wilcock, Ra speaks far more directly than did Cayce's Source, however I tend to accept the explanation offered by this book's author, Wynn Free, that as Cayce's "Source," Ra presented ideas and information to Cayce in a form consistent with Cayce's fundamentalist Christainity. What's important here is that the concepts offered by Ra to Wilcock are highly similar to those offered to Cayce by his Source. But whether Wilcock is, or is not, Cayce's reincarnation isn't that important, and finding the answer to that question really is not the reason to buy this book. The book is valuable for the elegant language and powerful ideas expressed by Ra to Wilcock, as well as for the two final chapters, which are reprints of text written by Wilcock that describe an astounding, and believable, way of understanding the nature of reality. Also, one of the final chapters is an exposition of what Wilcock calls "the energetic engine of evolution," which in and of itself is worth the purchase price of the book. Many of the ideas attributed to Ra are not new to me. What is new is Ra's fresh and clear way of explaining them, and the inspirational impact of the readings that Wilcock channels from Ra. These are so good that I have shared them with several like-minded friends, and also made copies for myself so that I can read portions immediately before or after I meditate. One of the things I find convincing about Wilcock is that he has consistently presented free of charge nearly all of his research and readings on several web sites, the addresses of which are noted in the book. His motivation appears to be a genuine desire to share Ra's message with others, rather than to enrich or glorify himself. There is a lot of junk in print these days, and a lot of people claiming to be psychic when what they actually are is opportunistic, but Wilcock, and probably by extension those individuals who are associated with him, is the real deal. Buy this book and judge for yourself. I don't believe you'll be disappointed.

A Book Whose Time Has Come

Published by Thriftbooks.com User , 17 years ago
This is one of the most compelling, well-written, and informative books I have read. Most books dealing with the science of ascension either scratch the surface, make up good sounding fluff, or else disseminate disinformation. But Wynn Free's book "The Reincarnation of Edgar Cayce?" is different - it packs a punch because of the incredible amount of uncorrupted truth it contains. That David Wilcock is the reincarnation of Edgar Cayce is not the sole focal point of this book - but I think it serves as an excellent case study in reincarnation and provides a launching point into more universal subjects. The evidence provided should convince anyone with open eyes that reincarnation is a valid phenomenon - from there, the rest of metaphysics follows. A good portion of the book is devoted to the Ra Material (considered to be the most accurate and reliable channeling material ever published). While the Ra Material can be difficult to read due to its dense verbiage, Wynn Free's book summarizes these same concepts in clear language and then expands upon them with further insights by David Wilcock and provides scientific evidence as back up. For this alone, I highly recommend it.It's best to get this book and see for yourself what other treasures are contained between the covers. A short list worth mentioning: details regarding the process of individual and global ascension, tips on living your life in accordance with spiritual principles, and lots of scientific facts and documentation to prove this is not just speculation.Being a discerning reader, I looked for holes and inconsistencies in the material and could find none. The insights given really resonated with my inner sense of knowing.Overall, I would say this is a book whose time has come.

Published by Thriftbooks.com User , 18 years ago
THE REINCARNATION OF EDGAR CAYCE explores the possibility that Edgar Cayce has reincarnated and now walks amidst us... as David Wilcock. From this slightly controversial assertion arises the basis for a most fascinating inside view of the topics of reincarnation, Edgar Cayce, David Wilcock, ascension, and the Law of One. THE REINCARNATION OF EDGAR CAYCE provides a careful overview of the consciousness work of David Wilcock.Many of David Wilcock's writings and channelings are included, as is information pertaining to the Egyptian sun-God, Ra.Author Wynn Free does an excellent job of detailing Cayce's and Wilcock's various personal idiosyncracies, while slowly building a case that Wilcock is the reincarnation of Edgar Cayce. The significance of this work is that it asks readers to keep open minds while considering the deeper implications of reincarnation, specifically Edgar Cayce's reincarnation. When we visualize how Edgar Cayce would come back (as he once said he would), would he be concerned with helping mankind deepen our understanding of our higher self? Most likely so. Would he be personally involved in providing as much information as freely as possible? Probably yes. Whether or not you believe David Wilcock is the reincarnation of Edgar Cayce, you'll love THE REINCARNATION OF EDGAR CAYCE for it's in-depth summary of scientific evidence supporting the theory of ascension, it's meticulous examination of Cayce and Wilcock, and it's explanation of what's happening next with Earth changes as we approach the predicted time of great transition. I highly recommend this beautifully written book!-- author of "Aura Advantage: How the Colors in Your Aura Help You Attain What You Desire and Attract Success"

Published by Thriftbooks.com User , 18 years ago
This book is the first of its type I have read. It's not simply about the reincarnation of one man. It deals with the past and future of us all. Positive, logical and well-written, it's chocked full of documented facts which support the intuitive knowledge which I've had for years. It raises the window shade, saying to us "If you think Life's wonderful from your current point of view, take a look at THIS!" It reveals the big picture, imparts a warm and insightful truth. It matters not whether Wilcock is Cacye. This read inspires appreciation of and confidence in both our selves and the marvels to come.
Trustpilot
Copyright © 2022 Thriftbooks.com Terms of Use | Privacy Policy | Do Not Sell My Personal Information | Accessibility Statement
ThriftBooks® and the ThriftBooks® logo are registered trademarks of Thrift Books Global, LLC