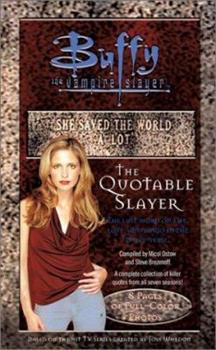 Gathers quotations by and about the star character of the Emmy-nominated television show.

Published by Thriftbooks.com User , 14 years ago
I own this book already and I love it so much I am giving to my friend. Obviously you have to like Buffy already but this book is so fun to read when you need to be happy because it has the best of the best quotes from our favorite show!

Published by Thriftbooks.com User , 15 years ago
I thought this was a fun little book. It's nice to just flip through and laugh at some of the quotes in the show.

Published by Thriftbooks.com User , 17 years ago
Its every fans dream. 200+ pages of the hilarious and sometimes heartbreaking dialogue of one of the best shows television has ever given us. With sections including: The Quotable Slayer, The Quotable Watcher, The Quotable Scoobies, The Quotable Other People, and Buffy on..., and 8 pages of Color Photos, you really couldnt expect more, unless of course it was a script book.Of course it wont have all of your favorites, because that is impossible with all of the great quips on the show, but Ostow and Brazenoff do a great job of compiling this essential quote book. I love the cover which includes Buffy's gravestone "She Saved the World A Lot". I would definitely recommend this book.Hopefully we get an Angel Supplement soon.

The Writers must have been insane kids...

Published by Thriftbooks.com User , 17 years ago
This book rocks. Although some of the quotes arent exactly like those in the show, including Angels little sidenote after he kills Jenny and everyone finds out, but its still pretty accurate and absolutely hilarious. I loved this book, the only thing that ticked me off is that it didnt have Riley's confession of love to Buffy and saying that she doesnt love him. I loved that line. But basically definately something to buy if you are a Buffy Fan like myself.

Published by Thriftbooks.com User , 17 years ago
The Quotable Slayer is a wonderful book for any fan of Buffy. It's got all the favorite quotes spanning over the entire seven season. It's broken down into easy to follow categories with the quotes displayed in the show's sequential order. It also gives which show it's from so you can go back to that particular show - either on tv or in your head - and remember the entire scene. Even if you're relatively new to the world of Buffy, this is the perfect book to get caught up on the series. By the quotes used, it goes through the series without giving any of mysteries of the show away for those who haven't seen certain episodes or even seasons.If you never pick up another book about Buffy the Vampire Slayer, this should be the one you read.
Copyright © 2020 Thriftbooks.com Terms of Use | Privacy Policy | Do Not Sell My Personal Information | Accessibility Statement
ThriftBooks® and the ThriftBooks® logo are registered trademarks of Thrift Books Global, LLC