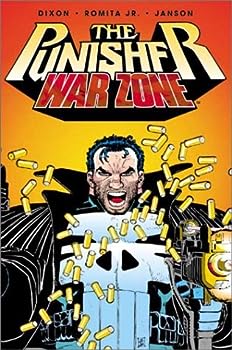 (Part of the Punisher Series and The Punisher: War Zone 1992 Series)

This description may be from another edition of this product. This book showcases the powerful pencils of master storyteller John Romita Jr (Amazing Spider-Man, Incredible Hulk) and the pulse pounding prose of action auteur Chuck Dixon (Robin, Nightwing, Birds...

Punisher at his best

Published by Thriftbooks.com User , 17 years ago
This is a great book for any punisher fan. In it the Punisher infiltrates the mob. The art was great and it read like a great mafia story. Great for anyone who likes movies like the Godfather or Scarface. It has some great Punisher moments. It is definitely worth reading for any Punisher fan.

One of the all time best Punisher stories

Published by Thriftbooks.com User , 18 years ago
Despite my love for The Punisher, throughout his many series' (he's been re-launched as a monthly title I do believe four times by now, not to mention the War Journal series as well as this title) he hasn't always had the best storylines. This TPB collects one of the best storylines in the history of the character with a great gritty script by Chuck Dixon and some just as gritty art by John Romita, Jr. Here we witness our beloved anti-hero vigilante infiltrating a crime family with the idea of bringing it down from the inside. Naturally, his cover gets blown and we are treated to the usual balet of blood, bullets, and carnage. I really like Dixon's interpretation of the character; arguably the best the Punisher would receive until Garth Ennis jumped aboard a few years back. The action scenes are nicely orchestrated and there are memorable moments aplenty (including Frank's longtime partner Micro running out on him). Romita, Jr's rendering of the Punisher is one of the most recognizeable depictions of the character in all of the title's history, five 'o clock shadow and all. All in all, this is one of the best storylines in the history of the Punisher, and is definitely worth checking out if you missed out on it all those years back.

The Punisher at His Grim- & -Grittiest

Published by Thriftbooks.com User , 19 years ago
Until Ennis & Dillon came `round with that amusingly-ultraviolent 12-issue maxi-series a couple years back, I considered this story arc to be one of the best, if not THE best Punisher™ adventures ever put to the bristol board. Of course, the fact that Chuck Dixon, one of comics' best action-adventure writers of comics' grim- & -gritty era, penned the script is a definite draw. And artist John Romita, Jr's renderings of our beloved anti-hero is one of the most recognizable depictions of the Punisher outside those of John Buscema and the underrated Mike Zeck.In this particular adventure, the Big P (with the help of a low-level hood) manages to infiltrate a crime family with the aim of destroying it from within. Naturally, he manages to do so in the end... but not without braving more than a few difficulties. Like getting his cover blown and escaping certain death by a matter of seconds, for example. And the fact that his backup man walked out on him in a huff in the first chapter doesn't help matters, either. Then there's the romantic interlude with the big boss' daughter that would return to bite our beloved vigilante in... subsequent story lines. All in all, you'll get yourself a pretty good helping of killin' of those who need killin', destruction, killin', rage, killin', and all that other good clean family fun in this collection. Did I fail to mention there's a lotta killin'? I don't wanna leave that part out...`Late
Copyright © 2020 Thriftbooks.com Terms of Use | Privacy Policy | Do Not Sell My Personal Information | Accessibility Statement
ThriftBooks® and the ThriftBooks® logo are registered trademarks of Thrift Books Global, LLC