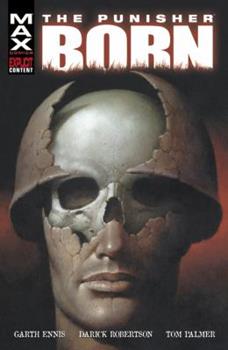 I n the waning days of the Vietnam War...the Punisher is born. The year is 1971. With mounting casualties and a rising anti-war sentiment, America's time in Vietnam is coming to a close. Yet in the isolated Valley Forge Firebase on the Cambodian border, Captain Frank Castle is one of the few soldiers still committed to the fi ght against the enemy. With dwindling reserves, Castle must stand against an impending Viet Cong attack that threatens to wipe...

Published by Thriftbooks.com User , 18 years ago
Despite having heard good things about this, I waited until a week before the Punisher movie release to pick this up. I'm a tough critic so for me to give something 5 stars, it has to be special. This one is. I've been a fan of Ennis's work on the Punisher and think that its the best Marvel currently offers. And this is among the best of that lot. From all that I heard about this before reading, I must say that I expected to be shocked, floored and left with my jaw open. I was all of those things and one very unexpected thing. The end gave me the CREEPS! I totally did not see that coming. After you read it you will understand. I place this alongside "Welcome Back Frank" as Ennis's finest moment on Punisher. But be warned. This is extremely graphic and made for adults that enjoy being shocked and disturbed. That's what Ennis does best.

Ennis writes another crucial story for any Punisher fan

Published by Thriftbooks.com User , 18 years ago
An amazing look at how Frank Castle evolves from man to soldier of fortune during the Vietnam conflict.Worth at least two readings for anyone that enjoys war stories or especially the Punisher

Published by Thriftbooks.com User , 18 years ago
In the tradition of the smash hit Origin: The True Story of Wolverine, Punisher scribe Garth Ennis has crafted Born; telling the never before seen story of a pre-Punisher Frank Castle during his third tour of Vietnam. While Born may start out as average, it quickly evolves into one of the bloodiest, most shocking, and expertly written stories that has ever come from the pen of Garth Ennis. This is by far Ennis' best work since his acclaimed Preacher saga, and he is without a doubt the best writer to ever pen the Punisher. The art by Darick Robertson illustrates all the graphic and gritty detail as he and Ennis both strike gold again as they did earlier with the Fury mini-series. The twist ending will actually make you look at the character of the Punisher much differently than before, and the unexpected impact will leave your jaw on the floor. Born is nothing short of brilliant, and deserves to be in every comic fan's library, even if you aren't a fan of the super hero genre of comics.

WOW doesn't even begin to describe this book.

Published by Thriftbooks.com User , 18 years ago
Amazing story. Great art. Garth Ennis. Need I say more? A touching and great look into the mind of Frank Castle like only Garth Ennis can provide. The book also has really cool "special features" at the back including a storyline overview written by Garth Ennis, thoughts about the story by Darick Robertson, Vietnam photo references, page layouts, and character designs.Get this book!

Published by Thriftbooks.com User , 18 years ago
This disturbing, yet masterfully written and beautifully drawn comic book (or "graphic novel" for those in denial) chronicles Frank Castle during his third tour of Vietnam, which is before he even thought about declaring war on mobsters and calling himself the Punisher, and showcases how the violence and gore surrounding him didn't turn him into what he is today, but rather how the war he was willingly a part of released his true, warped sense of morality and justice all those years before his family was slaughtered in Central Park, which was thought to be the original event that gave birth to the Punisher. Castle searched within his mind for the answer to the question of what he truly is and over the span of the four chapters it is so incredibly interesting to see how Castle comes to understand -- and accept -- that he is a monster and that he was born with this murderous yearning.A combination of beautiful art and powerful story, "Born" is without doubt the greatest mini-series of 2003. If you are a Punisher fan, you will forever cherish this as a part of your collection. If you are at least adept with the basic knowledge of the Punisher's history, you will find this mini-series as pure literary genius. Ladies and gentlemen, mini-series do not get much better than this.
Trustpilot
Copyright © 2022 Thriftbooks.com Terms of Use | Privacy Policy | Do Not Sell My Personal Information | Accessibility Statement
ThriftBooks® and the ThriftBooks® logo are registered trademarks of Thrift Books Global, LLC