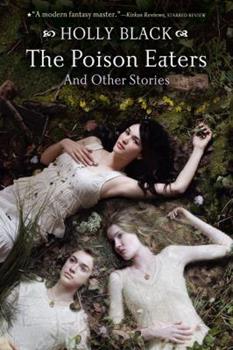 The Poison Eaters: And Other Stories

Poisonous girls whose kisses will kill. A fateful eating contest with the devil. Faeries who return to Ironside, searching for love. A junior prom turned bacchanalia. In twelve short stories, eerie and brimming with suspense and unexpected humor, Holly Black twists the fantastical creatures you thought you knew in ways you'll never expect.

Published by Thriftbooks.com User , 11 years ago
This book is a collection of Holly Black's short stories. Overall it is a decent collection. It you are a huge Holly Black fan, like I am, beware that many of these stories appear in other anthologies. So, I had already read some of them. There is a nice publication history in the back of the book just in case you want to check and see which stories you may have already read. The stories tend to be dark and follow paranormal/urban fantasy themes. Most of the stories are a bit ironic and have some sense of dark humor to them. There are a number of stories that touch on fairies, a couple that touch on werewolves, a story that deals with characters in books coming alive, one that deals with vampires, and a couple that deal with mythology. There is one story that takes place in the world that Black's Modern Tales of Fairie is in. There are twelve stories in all, they vary quite a bit in length. I tended to like the stories towards the back of the book better. Among my favorites were: The Night Market about a girl who saves her sister from a fairy by braving the strange Night Market, Virgin a story about unicorns, The Coat of Stars a story about a costume designer fighting the fairy Queen for his lover's return, Paper Cuts Scissors at story about characters coming out of books and mingling, and The Poison Eaters a story about poisonous sisters. There were also some stories that were a bit weak. The Land of Heart's Desire, which uses the characters from the Tithe series, wasn't the most interesting. Overall though I enjoyed the majority of stories and am glad I read the book. It is a quick read, but if you are a Holly Black fan...or an urban fantasy fan in general you should enjoy this collection. Now I am looking forward to reading the start of Black's Curse Worker series "The White Cat".

Published by Thriftbooks.com User , 11 years ago
This is a wonderful collection of short stories by Holly Black. The stories span everything from faeries to a girl challenging the devil to an eating contest. Holly Black's diversity as an author, and her skill, is exceedingly pleasurable to encounter. One of her characters states: "It was readers that needed to be protected, he thought. Books were something that happened to readers. Readers were the victims of books." If that is truly the case, this is a great book by which to be victimized. The collection of stories includes: The Coldest Girl in Coldtown A Reversal of Fortune The Boy Who Cried Wolf The Night Market The Dog King Virgin In Vodka Veritas The Coat of Stars Paper Cuts Scissors Going Inside The Land of Heart's Desire The Poison Eaters Most of these stories were previously published, but there are two new stories specifically crafted for this collection. These stories have an extremely dark edge and yet a poetic and often amazing sense of what it is to be human, and an assessment of humanity. If readers can be victimized by books, then they will be by this one. It will be an addiction that they cannot put down and one that will leave them wanting another fix. Exquisit
Copyright © 2020 Thriftbooks.com Terms of Use | Privacy Policy | Do Not Sell My Personal Information | Accessibility Statement
ThriftBooks® and the ThriftBooks® logo are registered trademarks of Thrift Books Global, LLC