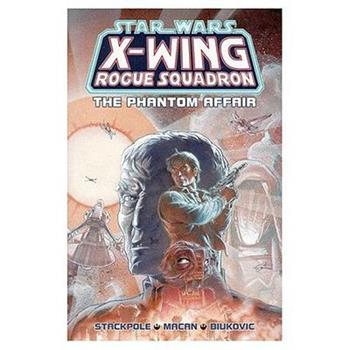 There is only one X-wing pilot to survive the missions against both Death Stars, in Star Wars and Return of the Jedi. That pilot is Wedge Antilles, the leader of Rogue Squadron. In this original graphic novel, Wedge and crew fight something that cannot be outgunned or outdistanced--they fight a lie.

Published by Thriftbooks.com User , 18 years ago
The second part in the X-wing: Rogue Squadron series, The Phantom Affair is arguably one of the finest comics you could find, and for many reasons.The art quality is simply astounding. Facial features differ with character and emotion. Even the background is not left to waste. Look carefully and you'll see just how much work and creativity there is: how every spare space is utilised, even if it's just to have pedestrians or surface features. The sheer variety of aliens, both familiar and merely exotic, is both appreciated and well done.Dialogue is great. Everyone has a part, everyone contributes to some effect. And if a character has no purpose in that given situation, no problem, give him a witty line and there you go! Plenty of humour will have you smiling; Dllrr asking if the fruit around him is edible, being told it's too hard to eat, and then dropping it on a stormtrooper's head was funny.And there were sneaky touches thrown in. How many of you thought that was George Lucas on p74, the one standing beside a Jawa holding a camera tripod, making a picture frame with his hands? Mirax dusting the step with a leaf before she sits is another.And that page . . . where something suddenly jams the cantina music, that something being a haunting illustration of the Interdictor Cruiser you'll see turn the next page. Simply excellent.The plot sounds straightforward but like all good stories all is not what it seems. Wedge's childhood flashback gives readers a visual link to what they have read in the X-wing books of his past.Just a couple of minor errors though. That starfighter Wedge flies to avenge his parents is not what a Headhunter looks like. Aren't they fixed-wing? This one had X-wing S-foils. And readers may have problems with the wormhole at the end, and how its credulity affects the plot.Be Warned! Make The Phantom Affair your first foray into this comic series and you'll see just why it's so damn good.

Published by Thriftbooks.com User , 20 years ago
The Phantom Affair is the second story arc of the X-wing Rogue Squadron comic series, but it was the first to be collected in TPB form. Its predecessor was deemed by the publishers to be not so good, and so this comic is sometimes seen as the real beginning of the series. And what an excellent introduction, an excellent comic, it is.The art is really good, the story is really really good, and the dialogue is lots of fun. This book picks up soon after the Battle of Endor -- several weeks or maybe a month. The Rogues, in case you don't know, are the Rebellion's top fighter squadron, often called on for the most difficult jobs. Their mission this time: to buy a starfighter cloaking technology from the Mrlssi. When they get there, however, things get complicated. Not only is there apparently a "ghost Jedi" haunting the campus, but it turns out that the Imperials have also sent a delegation to try and obtain this technology. And the real catch -- the head of the Imperial delegation happens to also be the guy who essentially murdered Wedge's parents when he was a boy. And it thickens from there, but I can't really say more without spoiling things.Aside from giving us a great, fun plot, this book also reveals more about Wedge's past than I think any other book or comic has. Plus, of course, there's a plethora of action sequences, and of course all the characters are in character, trading their customary amusing witty banter. And Mirax Terrik (from the X-wing novels), along with her ship the Pulsar Skate, appear here, giving readers a visual reference for her character.And this book doesn't skimp on extras either. There's a little introduction by Stan Sakai, an extra page giving us some background on and schematics of the X-wing fighter so we'll know what we're looking at, plus, accompanying the cover gallery are several pages of character design sketches. Very cool.This is one of the best X-wing comics, one of the best Star Wars comics, that you can buy. And I recommend you do so. You won't be disappointed.

Published by Thriftbooks.com User , 21 years ago
In my opinion, this is the best of the Star Wars: X-wing Rogue Squadron comic book story arcs. The artwork is absolutely fantastic, the story quite interesting (with intriguing flashbacks to traumatic events in the youth of Our Hero, Wedge Antilles...), and all the Rogues (and friends) are written perfectly in character. It's delightful, and highly recommended!

Published by Thriftbooks.com User , 22 years ago
a race of smart scientist called mrlistti sell all these weapons. Gives a litttle background on Wedge. A mysterious ghost jedi haunts the campus. But is it a ghost or an secret. THe phantom project to good to true?

Fans of Star Wars will love The Phantom Affair

Published by Thriftbooks.com User , 23 years ago
Presenting Star Wars in a medium other than film has proven to be a tricky task. Dark Horse Comics has the distinction of producing stories in the Star Wars universe in comic book format. Many of these efforts have been hit and miss, hampered by a synopsis type of writing style that prevents readers from getting too close to the characters--and therefore not really caring if they live or die. The first four issues of X-Wing: Rogue Squadron were hampered by plot flaws, continuity mistakes, and uninspired artwork. The Phantom Affair, collecting issues five through eight of the series, manages to avoid all of these pitfalls. The story, crafted by Michael Stackpole (author of the first four X-Wing novels) and scripted by Darko Macan has everything a Star Wars fan craves: action, humor, and (most importantly) a multi-layered, intelligent plot. The story follows Wedge Antilles and his group of intrepid pilots to the planet of Mrlsst, where they are to bid on behalf of the New Republic for an item that could greatly alter the war: a miniature cloaking device. When representatives of the Empire, including a dark figure from Wedge's past, arrive to bid on this very same device, the team of pilots are thrown into a web of intrigue that provides plenty of action. The artwork, provided by Edvin Biukovic, John Nadeau, Gary Erskine, Jordi Ensign, and Dave Nestelle is nothing short of brilliant. The style is something akin to Moebius or Geof Darrow, with intricate details provided in practically every frame. The characters are very well defined; each one has his or her own distinct look instead of being the same stock drawing with a different shade of hair. A good deal of "in" humor can be found in the artwork as well. For example, George Lucas makes a guest appearance, his camera equipment being carried by two cloaked Jawas. Fans of Star Wars (particularly Stackpole's X-Wing series) will no doubt enjoy this book; it's a great, full-throttle ride through the Star Wars universe that will leave them satisfied at the last page, but still wanting more.
Copyright © 2020 Thriftbooks.com Terms of Use | Privacy Policy | Do Not Sell My Personal Information | Accessibility Statement
ThriftBooks® and the ThriftBooks® logo are registered trademarks of Thrift Books Global, LLC