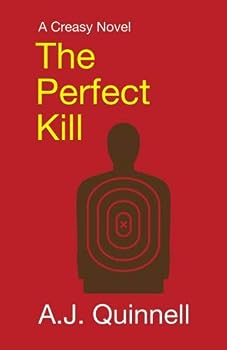 (Book #2 in the Creasy Series)

This description may be from another edition of this product. Three days before Christmas in 1988,a bomb blew Pan Am 103 out of the sky over the small Scottish town of Lockerbie, killing all passengers and crew. The wife and four year old daughter of Creasy were...

Published by Thriftbooks.com User , 21 years ago
Welcome back, Creasy. In the sequel to Quinnell's tour de force _Man On Fire_, no time is wasted in setting the stage for ex-mercenary Creasy's latest project. His wife and baby happen to be on a flight to the States: Pan Am 103.Creasy creates a project plan and executes it in sequential, ever-escalating fashion: exacting brutal, fitting revenge on the terrorists and organizations who killed his new family.Quinnell represents the pinnacle of true-to-life espionage and 'wet work'. As this is a pen name, the true identity of AJQ is a mystery to most. Suffice it to say, he knows his business.As I wrote in the review for _Man On Fire_, there is no better author in this genre than Quinnell. It is tragic that his books are (mostly) out of print in the U.S. It has taken many months to buy his out-of-print and new (via international) books and I've finally assembled the full collection of Creasy and non-Creasy stories.All of them are five stars, period.

excellent -purchased all his available books on strength of

Published by Thriftbooks.com User , 23 years ago
being a thriller/suspense reader this book sits in my top 20 as a result I purchased all his other books in the name of father I rate as his all time best book and snap shot is also excellent although it take a little longer.the only thing that bugs me about writers is why they use pen names whats the big deal??? if they write under other names chanes are we would but them as well which I did in the case od hagberg/flannery

A wonderful long overdue sequel to MAN ON FIRE

Published by Thriftbooks.com User , 23 years ago
Rarely a writer could be so integrate like Quinnell who could put romance, love, loyalty, adventure, professionalism, friendship and heroism into one book and made the sequel on a par with its prequel, but Quinnell always did and always could deliver. I wish many readers could find this unfarely overlooked great writer with simple style but profound sentimentals. Creasy in MAN ON FIRE not only lost his beloved wife and daughter this time, but also created a second-coming youngman of his own, Michael Said, the orphan from Malta, might be worth developing into a great character of his legacy in the future novel?

Another sentimental and tour-de-force read!

Published by Thriftbooks.com User , 24 years ago
Amongst the passengers on Pan Am 103, which was blown up in the sky over hte small Scottish town of Lockerbie in 1988, were the wife and 4-year-old daughter of a man called Creasy: a VETERAN & a MERCENARY. Creasy vows to seek his own vegeance, and to this end he needs the back-up of power and of youth. He therefore enlists a US Senator--whose wife also died on that flight--and ruthlessly trains an 18-year-old orphan into becoming a man in his own image.... As usual, Quinnell used news bylines to develop and evolve it into a wonderful story. THE PERFECT KILL is a modern day version of Charles Brownson's movie, THE MECHANICS, but in more deep carvings. Very profound yet with wordless feelings that we could find in his MAN ON FIRE and SNAPSHOT of the genre. The script is clear-cut and concise, fast paced with no hesitated linger-around or rigidarity. A PERFECT READ, as usual, Mr. Quinnell, whoever you are.
Copyright © 2020 Thriftbooks.com Terms of Use | Privacy Policy | Do Not Sell My Personal Information | Accessibility Statement
ThriftBooks® and the ThriftBooks® logo are registered trademarks of Thrift Books Global, LLC