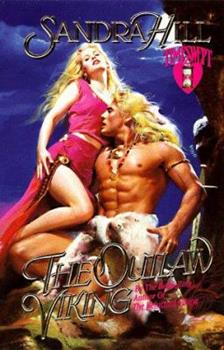 When a blow to the head causes Dr. Rain Jordan to travel back in time, she lands in the middle of a battlefield and in the arms of dangerous Viking warrior Selik, who takes her prisoner and finds he cannot resist the seductive charms of his captive. Original.

Published by Thriftbooks.com User , 20 years ago
Sandra Hill really exploded me into her writing with this one. If you want to get really involved with the characters in a romance then pick up this book and find a quiet corner (believe me, you want to be away from stares when you start laughing out loud and dripping tears on the paper) Each character has a uniqueness that surpasses the flat dimensions of writing and enter you into the world of pure *storytelling*. Rain and Selik collide with a sense of inevitability, not to mention spark and humour, right from the beginning - and don't let up. Along with a sometimes surprising plot-line Ms Hill has given us all what we really want - a love that sizzles, heroes that stick in our mind, and a bucket-load of laughs. Really, how could anyone refuse that??!

2nd book in the Viking Series...

Published by Thriftbooks.com User , 21 years ago
This is the 2nd book in the Viking series. Here we meet Ruby Jordan and Thork's daughter from the first book (The Reluctant Viking), Thoraine Jordan, or Rain.Rain and her mother go to the famous archeological dig going on at the ancient Coppergate site in England in 1999. Rain sees an intriging painting of a Norse Viking warrior raising his sword against the enemies in a battle known as the "Great Battle" between the Saxons and the Vikings in the tenth century. It is the last battle between the two that resulted in the Saxon rule over the Vikings.Rain is fasinated by the picture and her mother recognizes the man in the painting. The next day, Rain is so intrigued, she goes back to the painting to get a better look and suddenly is swept into the battle raging on in the portrait. Dr. Rain Jordan meets the man from the picture and knows him as Selik, her father's friend. She saves his life on the field, but he doesn't trust her.Selik has been through utter dispair and misery these past 10 years since a terrible atrocity was inflicted upon him and his family. Selik knows nothing but revenge. He was once a proud and vain man, but the ravages of war and the horrible things he has endured have made him a bitter and "ugly" man. Rain knows she was sent back in time to save this desperate man, but will she need someone to save her from him?I loved this story. I liked it more than the first book for the extra humor Sandra Hill is known for and the sexy and irrisistable heroes she creates. It is filled with Viking history and details not found in many historical romances. You can almost smell the city of Jorvik (York) and see the many peoples and things she describes. It is WELL worth the time and money spent on this EXCELLENT book, the whole series is worth more than 5 stars!1. The Reluctant Viking---2. The Outlaw Viking---3. The Tarnished Lady---4. The Bewitched VikingTracy Talley~@

Selik and Rain are made for each other.

Published by Thriftbooks.com User , 21 years ago
A little problem of 1000+ years between these two very passionate lovers doesn't make any difference, the fact that Rain had to travel back in time only adds to the storyline. I was so pleased to read about the characters from A RELUCTANT VIKING. It made it all the more enjoyable, especially Tikir and Eirik. These two are Rain's half brothers. They are also her two brothers in the future (Dave and Eddie). The first time she claps eyes on Tikir he is about to have his leg amputated. She does a brilliant job of saving him using accipuncture in place of anasthetic.Ubbi, a servant of Selik's is an absolute delight. He thinks Rain is an angel sent from god to save his master. They get into a lot of scrapes especially when they kidnap Selik for his own good. Though he doesn't see it that way. After being captured and tortured, Selik comes to an arrangement with the King and is alowed to stay in Britain. Selik comes after Rain. He is told by Adam that Rain is going home to her own time if she can, so he chases after her in the hope of persuading her to stay. Rain refuses because she thinks Selik has not given up his desire for vengence again Steven of Gravely. He builds her a house, clinic and an orphanage in the hope of persuading her to stay. He even promises her a dozen children of their own, to add to the dozen or so they already have in the orphanage. With all that being offered to you, who could turn him down. I know I couldn't, could you.Thank you Sandra, you never disapoint me with your books. Keep it up.

Published by Thriftbooks.com User , 22 years ago
I read this book first...then bought the others in the series...I just love the fact that the series is different from other historical romances. They are funny and interesting and worth reading over and over.

Published by Thriftbooks.com User , 22 years ago
This book has it ALL- humor,sex,romance,and even a bit of violence! It had me laughing and crying and cringing. Mrs.Hill is an absolute wonder,she definately knows what readers want.
Copyright © 2020 Thriftbooks.com Terms of Use | Privacy Policy | Do Not Sell My Personal Information | Accessibility Statement
ThriftBooks® and the ThriftBooks® logo are registered trademarks of Thrift Books Global, LLC