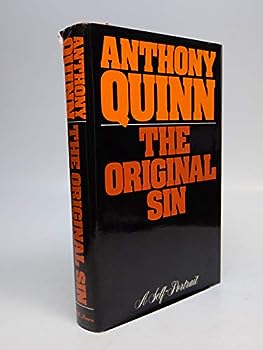 The Original Sin : A Self-Portrait

Original Sin, The: A Self-Portrait, by Quinn, Anthony This description may be from another edition of this product.

Reflections on the Turning points in the life of Anthony

Published by Thriftbooks.com User , 22 years ago
More than a review by itself, we read that Mr Quinn is planning on making a movie on his life as central theme, script built around this book. According to interviewer, Mr Quinn or producers, are on the look for young actor to play him on his young years when he starts his acting training and career. This has caught our attention, because my oldest son Bryan (20)which is a trained actor studying filmaking here in Monterrey, Mexico, could very possibly play Mr Anthonhy Quinn in young days. Since our family background is French-Irish-Mexican ( similar to Mr Quinn ) , Bryan's grand-father was born in Montana and established himself in Monterrey,Mex on late 50's. Bryan does share physical features like Height, Skin color,body built, face/overall apearance and speaks both Spanish and English . We feel Bryan can portray convincingly young Mr Anthony Quinn, both physically and emotionally. Should there be interest from Mr Quinn , pls contact : Mr Edmund B Durell c/o Alger Bryan Durell tel (528) 369-1021 Fax (528)369-1006 Monterrey, Mexico Best regards & Tank you on your time Ed
Copyright © 2022 Thriftbooks.com Terms of Use | Privacy Policy | Do Not Sell My Personal Information | Accessibility Statement
ThriftBooks® and the ThriftBooks® logo are registered trademarks of Thrift Books Global, LLC