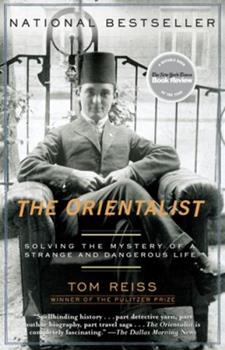 The Orientalist: Solving the Mystery of a Strange and Dangerous Life

A thrilling page-turner of epic proportions, Tom Reiss's panoramic bestseller tells the true story of a Jew who transformed himself into a Muslim prince in Nazi Germany. Lev Nussimbaum escaped the Russian Revolution in a camel caravan and, as "Essad Bey," became a celebrated author with the enduring novel Ali and Nino as well as an adventurer, a real-life Indiana Jones with a fatal secret. Reiss pursued Lev's story across ten countries and found himself...

Published by Thriftbooks.com User , 17 years ago
This is simply the best book I have had the good fortune to read in quite some time, in fact years. It ranks better than the five stars I can award, and it is indeed a work of art...a masterpiece. Reiss has conceived a book which reads like a novel, has the expansiveness of a travelogue, and a concise history of both the eastern and western worlds from the turn of the 20th century to the rise of Hitler. We visit many countries here...Azerbaijan, Persia, the old Soviet Muslim republics, Russia, Germany, Italy, France and more. However much seems to center on the Ottoman Empire and it's influence on all of the other cultures between 1905 and the thirties. We are also priviledged to entertain first hand information on the Cossacks, the Russian Revolution, the Spartacist Revolt, and the rise of Hitler and Mussolini. We meet and are exposed to the thoughts and lives of so many famous people of the era. The expanse of this book and the information contained within is a goldmine for both historians and literary types. It offered me so many opportunities to leave the book and to explore so many other books that it was definitely worth reading for just that. The main character, who went through more incarnations than Madonna and Michael Jackson combined, is absolutely compelling. I could not in any way wish to obtain more from any book.

What a glorious trip

Published by Thriftbooks.com User , 17 years ago
Fantastic in both senses of the word, this biography of Kurban Said--or should I say Essad Bey or Lev Nussimbaum?-is impossible to put down. The book's subtitle is "Solving the Mystery of a Strange and Dangerous Life," but fortunately much of the subject's life remains tantalizingly unexplained. Author Tom Riess does a masterly job following Lev's trail, but how nice it is to know that even with the marvels of the internet, the hard work of a very dedicated writer, and the discovery of deathbed papers, so many details of a life lived completely in the 20th century and in the spotlight on several continents can remain a mystery. So who is this book about? As Kurban Said, he was perhaps the author of "Ali and Nino," the story of love between a Muslim boy and a Christian girl set in the central Asian city of Baku just before the Russian Revolution. It has never been out of print since its publication in the 1930s and remains very popular in any number of languages. As Essad Bey he was the author of biographies of Stalin and Nicholas II and a book on the Azerbaijani oil industry. He was invited to be Mussolini's official biographer. His socialite wife claimed not to know who he really was, and their divorce made the tabloids. As Lev Nussimbaum he spent his life fleeing one hideous revolution after another, but still managed to die of natural causes. You couldn't make this stuff up. Reiss is a fluid, vivid writer who captures the mystery, excitement, and plain oddness of this subject's life. He places Lev's story (he calls his subject Lev) brilliantly within its historic context, and his depiction of the Russian revolution in central Asia is terrific. This author is a guy who jumped at every chance to sift though trunks of crumbling correspondence ignored for decades in the storage rooms of country houses, and, in one case, willingly sang selections from popular musicals for an ancient aristocrat who allowed him to look through stacks of her family's letters. If anyone is up to recording Lev's amazing life, Tom Reiss is it. I was sorry when "The Orientalist" ended. I look forward to whatever mystery Tom Reiss takes on next.

The Many Faces of Esad Bey

Published by Thriftbooks.com User , 17 years ago
In this gripping account of an Azeri Jewish writer named Lev Nussimbaum who reinvented himself as a Muslim Caucasian prince named Esad Bey and became the toast of Weimar Berlin, Tom Reiss sketches a parallel history of Europe and Asia between the wars. Nussimbaum was both a walking clash of civilizations and a talented writer who left us one great romantic novel, Ali and Nino, the story of a doomed love affair between a Muslim boy and a Christian girl set in Baku during the final years of World War I. Nussimbaum himself came of age in Baku, a cosmopolitan, oil-fuelled boomtown poised between Christian Europe and Islamic West Asia. To the people of this region, history itself must have seemed to be dissolving along with the Romanov and Ottoman Empires. It was the perfect era for a master shape changer whose own biography is no less fantastical than those of his characters. After a comfortable childhood in Baku, where his father made his fortune in the oil industry, Nussimbaum spent the remainder of his brief life as a stateless refugee. Reiss follows the young writer from Baku to Iran, Istanbul, Germany, Austria, the United States and finally the resort town of Positano on the Italian Amalfi coast, where Nussimbaum died penniless and alone after experiencing international literary celebrity while still in his twenties. Reiss definitively solves the 80-year mystery of Esad Bey's identity. His intimate, ironic portrait turns many histories on their heads, not least the beginnings of Soviet communism and German fascism. But in the end, "The Orientalist" is a tragic story of one man's doomed effort to transcend history. Like some Hegelian surfer dude, Nussimbaum was ultimately crushed by the same wave that had carried him to stardom.

Published by Thriftbooks.com User , 17 years ago
Who was "Kurban Said"? This was maybe not the most pressing question in my life before I began reading this scholarly yet utterly readable and fascinating book. But the question at the heartv of the book soon became a deeply meaningful, many-layered one. It not only asked about the mysterious real life-- lives? -- behind the name, but somehow it also began to ask something (or say something) important about the forces that caused the twentieth century to go as it did. A pretty powerful question, as it turns out! For a proper answer, every page of Reiss's gorgeous, plaintive, and meticulously researched book is required. And was enjoyed.(Reiss can be quite amusing as well.) In the heartbreaking end, Reiss leaves no doubt about the strangeness and the complexity of things: world events, the human psyche, etc. That's on one hand.On the other, he leaves no ounce of doubt about the true identity of Kurban Said either. He even gives him the last word.A very sad end to the really amazing story of a man who tuly was a victim of history, and then became a victim of himself.

A fascinating portrait of an obscure writer & exotic region

Published by Thriftbooks.com User , 17 years ago
This is one of the most absorbing books I've read in a long time. Not only is it a suspenseful, globetrotting investigation of a relatively unknown writer who penned the grievously underappreciated novel "Ali and Nino," but it is a thoughtful study of area of the world about which Americans know very little. This is an area of the world where the first Christian nation was established; where Christians lived harmoniously with Jews and Moslems. This book by Tom Reiss is a remarkable synthesis of social and historical topics that can help us understand better the world we live in today.
Trustpilot
Copyright © 2022 Thriftbooks.com Terms of Use | Privacy Policy | Do Not Sell or Share My Personal Information | Accessibility Statement
ThriftBooks® and the ThriftBooks® logo are registered trademarks of Thrift Books Global, LLC