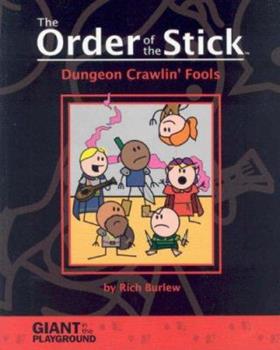 The Order of the Stick: Dungeon Crawlin' Fools follows the comic strip adventures of six stick-figure heroes as they brave the perils of your favorite fantasy roleplaying game. Watch as they struggle against monsters, evil twins, bored necromancers and their own crushing incompetence in more than 140 full-color comic strips. The Order of the Stick lampoons roleplaying games and the fantasy genre itself in hilarious fashion weekly on the internet,...

Published by Thriftbooks.com User , 16 years ago
This is the third volume to showcase the stylized stick-figure adventures of the Order of the Stick, a group of sometimes inept and always quarreling swords-and-sorcery adventurers on a quest to defeat their arch-enemy and, of course, obtain wealth and power along the way. The previous two volumes ("Dungeon Crawlin' Fools" and "On the Origin of PCs") were a collection of the first installments of the web comic and a batch of new material to provide character backstories respectively. This present book carries on the plotlines introduced in the first collection. (OOTS also appears now in "Dragon" magazine as a series of one-shots strips that do not pertain to the ongoing story.) These collections are HIGHLY recommended to any D & D player (especially those familiar with the 3rd Edition rules) or to any fantasy RPG fan in general. The strips feature side-splittingly wry humor, actual character development, worthy and interesting opponents with intricate schemes, recurring NPCs, and nifty adventures. (And, as a bonus, there are almost no typos or grammar errors such as plague almost every other web comic.) Mr. Burlew provides some authorial reflections in different sections of the book and some hints about what is yet to come (he is projecting a five-to-seven book series before OOTS wraps up). There's also some previously unpublished material included. High page count and quality paper, too. Pick this up immediately, and then order a copy for your closest friend.

Well worth the price of admission.

Published by Thriftbooks.com User , 16 years ago
Volume two of the Order of the Stick series has great art, dialouge, and storytelling. It's very clever, and doesn't fall into so many of the ruts that many webcomics or gaming cartoons fall prey to. At nearly 250 pages, it's worth the money, and that's before you consider the additional material in the book that's not available on the website. Highly enjoyable for people who are currently part of the rollplaying scene, or people like me, who left D & D behind a long time ago back when "Advanced" was considered something kinda newfangled and sexy.... I reccomend this book to everyone.

Published by Thriftbooks.com User , 16 years ago
I was introduced to Order of the Stick about a year ago and read the comics religiously. Rich Burlew has a wonderful sense of humor, and I've come to fall in love with the characters. The one drawback is for people not familiar with Dungeons and Dragons (like myself) some of the jokes fall very flat. However, there is enough humor throughout the comics to keep it going even when you're wondering what the heck they're talking about with Chaotic Good and twelve sided dice. This is the story of six travelers who are ... well, traveling. Of course, once one goal is accomplished another follows and so on. Their characters complement each other nicely and there's romance and magic and swordplay, all the integral parts of an epic story. I definitely recommend the books. [...]

Published by Thriftbooks.com User , 16 years ago
Over the years, I've read a number of online comics. I've also read a good many gaming (roleplaying) based comics. Order of the Stick is one of the few that have enough humor, engaging characters, and storyline to draw me (no pun intended) back to read and reread. I have heard the art could be better, but to be honest, I think the art style is part of what makes the comic. It's simplistic and very 'cookie cutter' in form, but Burlew manages to eek out very individualistic characters, villains and monsters. In short, Order of the Stick is downright hilarious with enough intelligence to be worth rereading and enough jokes that it has yet to get old (I've read the 200+ strips featured on the OotS site, plus the run that is currently in Dragon Magazine). It will be finding a place on my shelf alongside Calvin and Hobbes.

Published by Thriftbooks.com User , 17 years ago
I've been following the comic from the website [...] and it is absolutely hilarious! I can't stop laughing! You definitely need to have a basic understanding of how D & D or other gaming systems work in order to get most of the jokes. I don't really care for the game, and though I've only played a few times, I get a lot of the jokes and it just really entertains me. I highly recommend it! Check out the website if nothing else!
Trustpilot
Copyright © 2022 Thriftbooks.com Terms of Use | Privacy Policy | Do Not Sell My Personal Information | Cookie Preferences | Accessibility Statement
ThriftBooks® and the ThriftBooks® logo are registered trademarks of Thrift Books Global, LLC