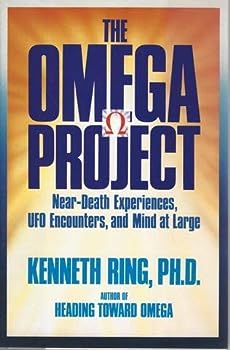 New research on the paranormal from the author of the pioneering work Heading Toward Omega, Dr. Kenneth Ring. Ring was the first researcher to offer scientific validation of the bizarre out-of-body episodes documented by Dr. Elisabeth Kubler-Ross, and now he examines the even stranger phenomenon of human encounters with UFOs.

Published by Thriftbooks.com User , 13 years ago
I cant believe this book He is trying to lump everyone who has had a near death experience or ufo encounter with some kind of mind set that often happens to abused kids...please get yourself to the 21st century He reminds me of the kind of scientist that has an idea before he begins and then sets out to prove it...instead of using emperical information and then making a conclusion My near death was real because when i was floating up there I saw things I could not have seen any other way

A 1992 book with some aged and possible ageless ideas

Published by Thriftbooks.com User , 14 years ago
I find myself reading books that I don't expect to complete agree with. It also helps if the book covers and idea that I don't know much about. The Omega project covers both nicely. Although I have never had an NDE or any substantial UFO experience I have read and know people in the former. This book provides a psychological look at people who have had UFO experiences and those who have had NDE experiences. Kenneth Ring makes a compelling argument that the two are related based on shared characteristics between the two groups verse control groups, in this case those people like I who have an interest in the experience. It is a nice scientific approach to help better understand the people and the experiences and I found it interesting. Dr. Ring goes on to explain what might be happening. Basically, that these experiences are moving the human race to another level. The 1992 book is rather dated in its view of the environmental crisis, but I would not say off the mark entirely. His theories on the subject lead to an earth consciousness that is working to save itself and mankind from destruction. To this end, man is either becoming more "imaginal" in nature or we are beginning as a species to better recognize our true nature. He is solidly in the camp of man evolving to become a more "imaginal" or spiritual being if you will. I am more in the camp that there is a creative consciousness and that we are becoming more aware of our true spiritual nature or soul that exists for the current time incarnately, but can also exist disincarnately. It is an interesting perspective, one that I don't completely agree with, but one that give me some information on a subject I didn't know that I didn't know much about. Perhaps, even with the age of the book you might find the book challenging your beliefs or expanding your mind. Happy reading either way.

Published by Thriftbooks.com User , 17 years ago
As one of those rare individuals who has had both an NDE AND a Project Bluebook confirmed UFO sighting (with associated "memory" of abduction), I found Ken Ring's hypothesis much more plausible than the alternative. I found his explanation on the communication occuring between the Mind at Large and the world's sensitive-intuitive population to be both accurate and liberating.

Published by Thriftbooks.com User , 24 years ago
An excelent book. The author writes an excelent study on the human phsychosis after abductions or near death expeariences.
Trustpilot
Copyright © 2022 Thriftbooks.com Terms of Use | Privacy Policy | Do Not Sell My Personal Information | Cookie Preferences | Accessibility Statement
ThriftBooks® and the ThriftBooks® logo are registered trademarks of Thrift Books Global, LLC