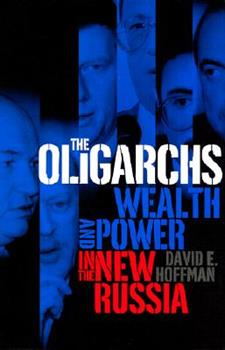 The Oligarchs: Wealth & Power in the New Russia

David Hoffman, former Moscow bureau chief for The Washington Post, sheds light onto the hidden lives of Russia's most feared power brokers: the oligarchs. Focusing on six of these ruthless men, Hoffman reveals how a few players managed to take over Russia's cash-strapped economy and then divvy it up in loans-for-shares deals.

Published by Thriftbooks.com User , 15 years ago
I'm about a quarter into the book. I am very impressed. It is riveting. I went on a tour of Russia in June and wanted to know more about what is going on. I have talked my husband and sister into reading it. I think Americans get some insight into a country we know little about.

Published by Thriftbooks.com User , 15 years ago
I have just finished reading The Oligarchs - all 496 pages of it, and I just wanted to let anyone know who was thinking of reading it that it is an absolutely, incredible piece of quality work. I enjoyed every page.

Published by Thriftbooks.com User , 15 years ago
This book provides a great background to understand Russia and the current situation today. If you want to know about business and the history of Russia from the 80's forward, written in a way that reads like a novel, read this book.

Published by Thriftbooks.com User , 19 years ago
Much better than I expected, a serious work with a great deal of research invovled. It avoided the typical lurid embellishments of the genre, and also made the point of the important period of transistion in the Gorbachev period, where nascent Russian capitalism started. It lacks somewhat in that it focuses on only six men, and they are of varying importance in the post-Yeltsin period. As Putin reportedly said when asked about Berezovsky--"Who?" Nevertheless, a good job, an interesting read and thankfully avoids falling into the tabloid style of so much of the literature on the topic.

The Power of Six

Published by Thriftbooks.com User , 19 years ago
David Hoffman's "The Oligarchs" documents in great detail the rise of 6 businessmen--Aleksandr Smolensky, Yuri Luzhkov, anatoly Chubais, Mikhail Khodorkovsky, Boris Berezovsky and Vladimir Gusinsky--who became the "oligarchs" who shaped the political and economic landscape of the New Russia. They were merely ordinary Russians until the Soviet Union collapsed. So how did a mere handful Russians end up controlling such an epic proportion of Russia's economy and have such great influence in its politics? And how did they manage to rise at Russia's decline? Hoffman's book will answer these questions by piecing together extensive research and interview to create a well-balanced, serious but at the same time, a downright fun and readable book. "The Oligarchs" is a landmark.
Copyright © 2022 Thriftbooks.com Terms of Use | Privacy Policy | Do Not Sell My Personal Information | Accessibility Statement
ThriftBooks® and the ThriftBooks® logo are registered trademarks of Thrift Books Global, LLC