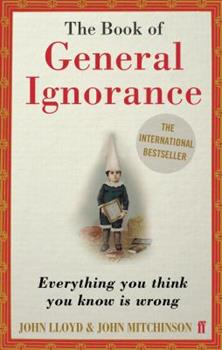 The Book of General Ignorance

by John Mitchinson and John Lloyd

This description may be from another edition of this product. Misconceptions, misunderstandings, and flawed facts finally get the heave-ho in this humorous, downright humiliating book of reeducation based on the phenomenal British bestseller. Challenging what...

An entertaining offshoot of the best show on TV

Published by Thriftbooks.com User , 13 years ago
The British panel game-show "QI" is, I think, the best show on television, even given the sad fact that it *isn't* on television in the US, and could well be runner-up to the fabled "Mystery Science Theater 3000" for the best show in the history of television. That sets a pretty high standard, therefore, for books associated with the series, and "The Book of General Ignorance" by and large stands up to the pressure. Drawing from the TV program's custom of giving large negative-point penalties to contestants who give answers that "everyone knows" are true but are in fact incorrect, Johns Lloyd and Mitchinson list a bunch of questions that have conventional-wisdom answers (Who invented the theory of relativity? Why is a marathon the distance it is?) or have popular urban legends attached to them (What did Thomas Crapper invent? What man-made objects can be seen from the moon?) and show why "everything you think you know is wrong." Some of their information is debatable (for example, in response to the question "How many states does the USA have?" they answer 46, saying that Virginia, Kentucky, Pennsylvania, and Massachusetts are technically not "states" but commonwealths), but even the most educated reader would probably come away from these pages having learned a few things. More to the point, she'd also come away entertained. While this book doesn't have the outright comedy of the TV show (granted, it's not meant to), the pedigree is still evident, which puts this a step ahead of much of the raft of "interesting stuff you probably never knew" books out there. Combine this with a series of Cecil Adams books, and I bet the connoisseur of obscure knowledge and shooter-down of urban legends will come out very well armed indeed.

Published by Thriftbooks.com User , 13 years ago
_The Book of General Ignorance_ by John Lloyd and John Mitchinson is a remarkably fun book to read, essentially a collection of questions followed by an essay answer for each one, not organized really into any significant way (though questions dealing with the same subject might follow one another). This book would be fun for any lovers of trivia and deal often with questions that people think they might know the answer to but really don't. What's the tallest mountain in the world? Think you know right, Mount Everest, at 29,029 feet? Nope, it is Mauna Kea. Though it is a modest 13,799 above sea level, measured from its seabed base to its summit, it is a whopping 33,465 feet in height, almost three-quarters of a mile higher than Mount Everest. What's the driest place in the world? The Sahara right? It is dry alright, getting just one inch of rain a year but it is the third driest place on Earth. The driest in fact is Antarctica, as some areas of the continent have not seen rain for two million years. The second driest is the Atacama Desert in Chile, which averages 0.004 inch of rain a year, and some areas have not seen rain for four hundred years. You have been told that Eskimo is a rude term right, that the preferred term now is Inuit? True, Inuit is the preferred term in Canada, but Alaskan Eskimos are perfectly happy with the name as they "are emphatically not Inuit, a people who live mainly in northern Canada and parts of Greenland." In fact there are many types of Eskimo, of which the Inuit are just one type (the others include the Kalaallit of Greenland and the Yupiget and the Alutiit of Alaska). Think the first turkeys eaten by English-speaking peoples were the Pilgrims? Nope, Turkeys first reached Europe in the 1520s, brought from their native Mexico by Spain and sold throughout Europe by Turkish merchants, by 1585 becoming a Christmas tradition in England. Perhaps you have heard that chop suey is actually an American dish. Not so, according to this book, it is a local dish of southern Canton, where it is called tsap seui, which means "miscellaneous scraps" in Cantonese, brought over by early Chinese immigrants to California. How many states of matter? Three right, solid, liquid, and gas? Nope, more like fifteen, as the list includes such states as plasma, superfluid, degenerate matter, fermionic condensate, Bose-Einstein condensate, and strange matter. Others questions and answers deal with just plain odd things that I didn't know. Croatia for instance gave the world the necktie, as Hravat is the Croation word for "Croat" and where the word cravat comes from. In the 17th century, Louis XIII of France kept a regiment of Croatian mercenaries during the Thirty Years War who as part of their uniform wore a wide, brightly colored neck cloth by which they became known, a style that was later much copied in Paris. St. Bernard dogs have never, ever carried barrels of brandy around their neck; the myth comes from an 1831 painting by a young E

Great gift for the trivia buff

Published by Thriftbooks.com User , 13 years ago
This book is insightful without being condescending. I enjoyed the information provided in this book, and some of the information is quite entertaining. I will no longer accept conventional training at face value.

You may be more ignorant than you know . . . but don't worry, so is everyone else.

Published by Thriftbooks.com User , 14 years ago
At last, the American release of what is undoubtedly one of the most fascinating books you could ever hope to delve into! Whereas most trivia books contain "facts" of dubious origin and little consequence, it's clear that the authors of this book have gone through great pains to dig out and verify the most interesting tidbits from the realms of history, nature, science, and culture. Let's go for a few examples (edited heavily for space; the book is far more detailed). Q: How many words do Eskimos have for snow? A: Actually, no more than four. Although it's often said that Eskimos have dozens or even hundreds of words for snow, there are at most only four root-words for it, and that's drawing from all Eskimo languages. (They do, however, have more than thirty words for demonstrative pronouns, where speakers of English only have four.) Q: Who invented the telephone? A: Contrary to what you've been taught, it was not the famous A. Graham Bell! Credit goes to Antonio Meucci, a brilliant but ailing Italian inventor, whose patent fell into the hands of Bell, a young Scottish engineer. Meucci died before his case against Bell could come to fruition. There are hundreds of more questions to the end of fascinating and delighting the reader. However much you think you know, there will be mountains of information in here to surprise you--and that's quite the point. In the words of co-writer John Lloyd, "This book is for the people who know they don't know very much." As the authors hope you will come to understand, one's best hope in life is to recognize that one is generally ignorant, for it is simply impossible to know any but a sliver of the wealth of knowledge contained in and about the world. By admitting this, one is then motivated to ask questions that matter, for everything can be interesting when looked at in the right way . . . it's just that most people fail to look. But it goes further than that. "The Book of General Ignorance" is just one piece of a cultural phenomenon that has its roots in Britain. It was originally written as a textual accompaniment to the hugely-popular television show "QI", which operates under the philosophy that curiosity--for its own sake--is worthwhile. The show is unlike anything broadcast on American screens, featuring panelists who try desperately to claw their way to the answers to questions they are posed (questions not unlike those appearing in the book). While they're rarely correct from the off, it's the mere delight in discovering the truth that ends up being, unfailingly, uproariously funny. The show's a joyful celebration of the fact that questioning the world around us need not be an impenetrably erudite or boring endeavor. [...] In the meantime, pick up this book, and once you've been thoroughly impressed, buy it for your friends as well. It'd make a lovely gift for birthdays and the holiday season, assured to please scholar and dilettante alike. Recommended with cherries on top.

I guess I thought I knew more than I did...

Published by Thriftbooks.com User , 14 years ago
"This book is for the people who know they don't know very much." This comment, in the introduction of The Book of General Ignorance, sets the stage and presents the authors' challenge. I started reading it with a "Who do they think they are fooling" attitude. They made me a convert. This book only gets more interesting as you continue reading it. Some of the knowledge nuggets aren't big secrets, and in fact read as "trick questions," like "What is the tallest mountain in the world?" The trick is, "tallest," not "highest." Got it? Mauna Kea in Hawaii, not Mt. Everest. Then, what is the most dangerous animal that has ever lived? Answer? A mosquito, responsible, the authors say, for the deaths of about 45 billion humans. Of course (and they know this), one mosquito isn't responsible for these deaths, there are many species of mosquitos, and mosquitos really don't (directly) kill anybody. Trick question again. Then there were the questions that didn't hold any surprise at all: "What is the main ingredient of air?" Answer: nitrogen. But it got more interesting. What man-made objects are visible from the moon? None. Many are visible from "space" (a mere 60 miles above the surface of the Earth), but the moon is too far away. What is the biggest thing that a blue whale can swallow? What are violin strings made of? There are so many questions answered, that there is something here for everybody. This is better than Trivial Pursuit, because of the explanations given. This should be an entertaining book on CD to listen to on a long trip, and can easily be turned into a game for adults and kids. So I started reading it with a chip on my shoulder, and the authors made me a believer. Interesting, indeed. The book just kept getting better. And my favorite factoid? What is the longest animal alive today? Hint... it is not a blue whale.
Copyright © 2020 Thriftbooks.com Terms of Use | Privacy Policy | Do Not Sell My Personal Information | Accessibility Statement
ThriftBooks® and the ThriftBooks® logo are registered trademarks of Thrift Books Global, LLC