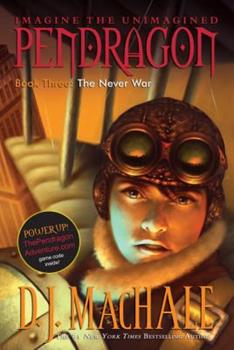 (Book #3 in the Pendragon Series)

The third installment in an epic series of adventures First Earth Fourteen-year-old Bobby Pendragon is a loyal friend, sports star, devoted pet owner -- and Traveler. Along with his uncle Press, Bobby has visited the alternate dimension of Denduron and participated in a civil war. He's also waded through the endangered underwater territory of Cloral. Now Bobby once again finds himself thrust beyond the boundaries of time and space into a place that...

Published by Thriftbooks.com User , 12 years ago
Purchased for grandsons. Read first and found ok so let grandsons read. Good for ages 10 and 12. A little too much magic, but ok.

Published by Thriftbooks.com User , 13 years ago
D. J. MacHale wrote for television for years before turning his attention to novels. He created ARE YOU AFRAID OF THE DARK?, a long-running series on Nickelodeon in the United States, but it also showed in Canada on YTV and Cinar. For the last few years, he's been writing the adventures of Bobby Pendragon, a boy who's destined - hopefully - to save the world. Several worlds, actually. Bobby is a Traveler, one of those who have the power to "flume" from world to world. He's brought into the adventure by his Uncle Press. As Bobby was growing up, Uncle Press also took Bobby scuba diving, mountain climbing, to martial arts, driving, and several other things that gave him skills he needs to survive against enemies he encounters. All during that time, Uncle Press was training Bobby to be a Traveler. Bobby's greatest foe is a villain called Saint Dane. Saint Dane has the ability to change his appearance at will and constantly hides in different worlds while working his nefarious plans. THE NEVER WAR is the third book in this exciting series. In it, Bobby travels to First Earth, which takes place in the year 1937. The gangster era isn't new by any means, and I was slightly let down when I discovered I wasn't being taken to a new world. I especially loved Cloral, the world Bobby went to in the second book, THE LOST CITY OF FAAR, and I look forward to returning there hopefully in one of the later books. Still, I'm older than the average Pendragon reader. The 1930s and the Hindenburg are familiar to me through several other books I've read as well as history I've researched. For all the familiarity with the time period, though, MacHale tells a fascinating and fast-paced tale. Bobby and his new best friend Spader land in the 1930s while pursuing Saint Dane. They're immediately met by machine-gun toting thugs that try to kill them. Bobby figures out how to escape and gets Spader out as well. Spader is way out of his depth because he's never seen anything as "technologically advanced" as the 1930s. One of the best things about the Pendragon books is that Bobby usually gets to save the day in a down-to-earth manner. He doesn't have any really special skills or powers that help him. At this point, he's fourteen years old and can do what most kids that age can. This makes the series more believable in some ways, and I think it draws the Pendragon audience in a little closer. MacHale's sense of timing and pacing is excellent. The story moves quickly, and I got a real sense of urgency throughout the book as Bobby tries to figure out what Saint Dane is really doing. Many of the chapters end up on cliffhangers that will draw you rapidly into the next chapter. The dialogue is fantastic and sounds real. One of the other facets of the series that I really enjoy is Bobby's friendship with Mark Dimond and Courtney Chetwynde. The closeness they share, even through Bobby's journals, feels real. MacHale also mixes in adult heroes with his young

Published by Thriftbooks.com User , 17 years ago
Bobby Pendragon is a regular 14 year old, with some irregular adventures. After finding out he is a Traveller, Bobby and his Uncle Press set out to help territories during their turning points. Saint Dane, an evil Traveller seeking to destroy Halla, every time and every territory there ever was, is putting territories into chaos. After two suspenseful adventures on both Denduron and Cloral, Bobby must begin to accept his role as a savior. By sending journals to his friends about his experiences, Bobby, and Spader go through the worst imaginable in 1937, New York City. In between mob gangster conflicts, and a trip to the future, Bobby experiences both shock and tragedy. He is pushed to limits in this incredible book, and unfortunately many characters have bad endings. Pendragon, Gunny, and Spader are tangled in chaos. What is Saint Dane's next plot? Can Bobby see the future, change the past, and prevent World War II from happening? It is up to Bobby to happens to the present, past, and future.

Published by Thriftbooks.com User , 17 years ago
This book was a relife after I read the second book in the series. I was so suspensful, and I like that in a book. I like the whole back in time thing. It really worked. D.J. MacHale made a back in time city so real. I actually thought I was going with them back and through the flumes. He is so descriptive when he writes his books.

Best so far in the series...

Published by Thriftbooks.com User , 18 years ago
Pendragon: The Never War is the third installment in the Pendragon series. You still have the same likable and believable characters, Bobby Pendragon, Mark, Courtney, Spader, and a new character, a traveler, that goes by the name of Gunny. This book's territory is First Earth, the year, 1937 of Bobby's home territory, Second Earth. The book starts on the brink of World War II with two gangsters ready to fire at Spader and Bobby. Filled with exciting scenes that make you want to read forever, Pendragon: The Never War is the best so far in the series. It takes you from a territory called Veelox to hotel in Uptown, New York City. I don't want to give out too much information about the book, but D.J. Machale has you re-think your history. I recommend it to anyone that is into the Sci-Fi and Fantasy genre. A great read!!
Copyright © 2020 Thriftbooks.com Terms of Use | Privacy Policy | Do Not Sell My Personal Information | Accessibility Statement
ThriftBooks® and the ThriftBooks® logo are registered trademarks of Thrift Books Global, LLC