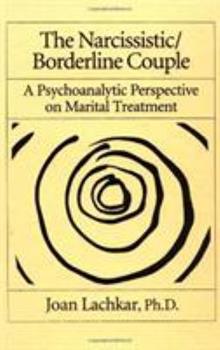 The Narcissistic / Borderline Couple: A Psychoanalytic Perspective on Marital Treatment

The social isolation caused by single-parent families, decreased parental contact with children, and absence of extended families has produced a large number of narcissistic/borderline couples, in which the partners form a parasitic bond and play out a destructive drama of earlier conflicts. This volume presents an approach to treatment of such couples, based on the views of Kohut, Grotstein, Klein, Bion and other theorists. Dr. Lachkar combines clinical...

Intricate and complex. Made me reach for understanding

Published by Thriftbooks.com User , 13 years ago
This was one of those books way over my head and I loved it. I don't know how others approach something as dense and brilliant as this but I read bits, flip to areas of interest, leave it laying around the house, then start again from the beginning, run into the ditch (sometimes within a paragraph or two), set it down a while, it falls to the floor, pick it up and start to read wherever it landed, get a highlighter out and start highlighting along with folding page corners down. Gradually, learning like this a base of understanding is build until I can read it through and understand it.... which I did. I had to think if what the author said is true and then why it would be so throughout the book. This author is an excellent teacher. I feel I've advanced a bit in psychological understanding.

It Takes Two to Tango

Published by Thriftbooks.com User , 13 years ago
It Takes Two to Tango July 30, 2009 Joan Lachkar has done it again. She has written a book of invaluable assistance to those working with the most difficult issue of managing the narcissistic personality. In her book, Narcissistic-Borderline Couple: A Psychoanalytic Perspective on Marital Treatment (1992), Lachkar defines the narcissistic-borderline couple as individuals who, when they are together, form a shared couple myth that gives rise to many collective fantasies. According to Lachkar, it takes two to tango and two to sustain a long-term relationship that involves abuse. She describes the intricacies of each pathology and demonstrates how different practice paradigms are needed for successful treatment. According to Lachkar, the narcissist responds most profoundly to the mirroring aspect of self-psychology while the borderline requires the containment provided by object relations theory. Lachkar presented a well documented and eminently helpful case describing the psychological dance the narcissist and borderline consciously or unconsciously enter into stirring up highly charged feelings that she feels fulfill many early, unresolved conflicts. In Lachkar's view, each partner needs the other to play out his or her personal relationship drama. Lachkar proposed that within narcissistic-borderline relationships there exists two developmentally stymied and arrested people who seduce, entice, or coerce one another into playing out certain roles, as they bring the past into the present, and play out their archaic experiences. Lachkar believes that due to the borderline's false self and compliant, chameleon-like personality, for a short time he or she is able to play-act at being the perfect mirroring object for the narcissist, but this role rapidly deteriorates. In any ongoing relationship drama between them, the narcissist requires a borderline to worship him or her and to fuel his or her insecure yet nascent self, and the borderline requires a narcissist in order to be constantly mirrored. In her current book, How to Talk to a Narcissist (2008), Lachkar continues her profound insight into the workings of the mind of the narcissist and presents a well thought-out basis for the observation that much has been written on narcissism but little attention has been paid specifically to how to communicate with a narcissist. Her stated purpose in writing this book was to help therapists, patients, and others who interact with narcissists become more aware of how they deal with the various types of narcissism, and to use language and techniques that will allow them to communicate more effectively with the complex personality of the narcissist. Lachkar's work encompasses many theoretical perspectives including Heinz Kohut and his theory of Self-Psychology and presents Self-Psychology's applicability to the narcissist personality, including a new approach that she has developed, called "empathology." In Lachkar's book, she emphasizes tha

Published by Thriftbooks.com User , 13 years ago
This is a great book for those who are interested in knowing a little bit more about couple's relationship. The book may be a bit misleading as it may sound pathologizing but in fact the book talks about the real dynamics of couples.

It all makes sense now.

Published by Thriftbooks.com User , 18 years ago
I have BPD (Borderline Personality Disorder) and was involved in a relationship with someone that had NPD (Narcissistic Personality Disorder)but wasn't aware when I was IN the relationship. This book helped me not only understand why he and I continued the "dance" of what seemed like never ending turmoil, but also why we were attracted to one another to begin with. Many things from our childhood determines who we choose as romantic partners. If you or someone you know is BPD and involved with an NPD, this book is a MUST read! Excellent!

Published by Thriftbooks.com User , 18 years ago
It takes two to tango - and to sustain a long-term abusive relationship. The abuser and the abused form a bond, a dynamic, and a dependence. Expressions such as "follies a deux" and the "Stockholm Syndrome (Trauma Bonding)" capture facets - two of a myriad - of this danse macabre. It often ends fatally. It is always an excruciatingly painful affair.Lachkar's grossly overlooked book is the best introduction I know of to abusive dyads comprised of two people with personality disorders. Replete with case studies and an impressive theoretical background (mainly, but not only, Object Relations Theories) - the book is a vade mecum for both professionals and sufferers.There is more to an abusive dyad than mere pecuniary convenience. The abuser - stealthily but unfailingly - exploits the vulnerabilities in the psychological makeup of his victim. The abused party may have low self-esteem, a fluctuating sense of self-worth, primitive defence mechanisms, phobias, mental health problems, a disability, a history of failure, or a tendency to blame herself, or to feel inadequate (autoplastic neurosis). She may have come from an abusive family or environment - which conditioned her to expect abuse as inevitable and "normal". In extreme and rare cases - the victim is a masochist, possessed of an urge to seek ill-treatment and pain. Sam Vaknin, author of "Malignant Self Love - Narcissism Revisited".
Trustpilot
Copyright © 2022 Thriftbooks.com Terms of Use | Privacy Policy | Do Not Sell My Personal Information | Cookie Preferences | Accessibility Statement
ThriftBooks® and the ThriftBooks® logo are registered trademarks of Thrift Books Global, LLC