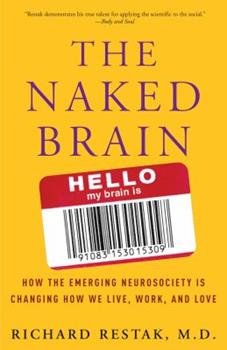 The Naked Brain: How the Emerging Neurosociety is Changing How We Live, Work, and Love

Consider a world in which Marketers use brain scans to determine consumer interest in a product Politicians use brain-image-based profiles to target voters A test could determine your suitability for a job or to whom you will be romantically attracted Far from science fiction, this "neurosociety"-a society in which brain science influences every aspect of daily life-is already here. Innovative researchers and cutting-edge technology, like brain imaging...

slower delivery than I thought

Published by Thriftbooks.com User , 12 years ago
This purchase was pretty much perfect, the delivery of the purchase was a little slow, but the book is in good condition and nothing else was really wrong with the purchase.

Published by Thriftbooks.com User , 12 years ago
'''The Naked Brain by Richard Restak''' A revolutionary new look at the progress of neuroscience in the new millenium. This short work is a synopsis of the extensive research Restak has been doing concerning brain mapping and the influence this will likely have on advertizing, work, love and many other aspects of our everyday lives. This book elaborates upon a field begun by Penfield and Jasper in the 1950's which began with neural stimulation and localization theory and is now being revised by modern neurologists, neurosurgeons and psychologists to include neural networks involving several areas of the brain. The book begins with a flashback to the past; a look into the humble beginnings of neuroscience and its progenitors. 18th century reseacher Angelo Mosso gained insight from a peasant named Bertino who several years earlier suffered a head injury which destroyed the bones of his skull covering his frontal lobes. Through observation, Mosso found that pulsations could provide a measure of brain function during mental activity. More accurate measures were later developed using dyes, and today we use CAT scans, MRI's and PET scans. An anatomical diagram then follows, giving the reader a basic lesson in neuroanatomy in the following pages. A wide range of topics are discussed in great detail, especially brain areas and networks involving emotions. Some highlights of the book include: -the chapter called "Compassion and the Frontal Lobes" (pgs. 114-120) -the anterior cingulate cortex's (ACC) role in love (pgs. 131-136) -the description of the "cognitive unconscious" -economic decison making, involving the parietal cortex, striatum and prefrontal cortex (pgs. 185-190) -the interplay of the anterior insula (area involved with disgust), dorsolateral prefrontal cortex (goal-oriented part of brain) and the ACC. If one is disgusted by an unfair offer, the AI will initially be activated, followed by the DPLC, which will attempt to appease and accept the offer, and finally a decision will be made on the part of the ACC to accept or regect the deal. (pgs. 187-188) -the description of the brain'e plasicity - information concerning the nucleus accumbens, or pleasure center of the brain (pg. 208)

Published by Thriftbooks.com User , 13 years ago
Richard Restak has published several books about the functioning of the human brain, all intended for a general audience. In my opinion, this is the best of them, covering a great deal of material in a manner that should be accessible to all. The focus is on two aspects of the brain in the early twenty-first century: both the most recent research on the brain itself and the effects of new technologies in the areas of both biology and information technology on the brain. The book covers such areas as the role of both talent and practice in achieving mastery in playing music, the effects of increased bandwidth of information transmission on our ability to pay attention, recent discoveries that the brain is far more plastic (able to "rewire" itself) than had previously been believed, and the ethical questions concerning prescribing psychoactive drugs for patients with no disorder that can be diagnosed. I also found Dr. Restak's cautious attitude about what we really do know quite appealing.

What Neuroscience Tells Us About the Brain

Published by Thriftbooks.com User , 14 years ago
This is another one of Dr. Restak's outstanding books. He renders difficult technical information in a readily understandable fashion. Moreover, he explains the ramifications of the research to society. Brain imaging is a hot topic now. It engenders much excitement and hype. Dr. Restak puts this research in its proper perspective.

We think less than we think

Published by Thriftbooks.com User , 14 years ago
Did you know that scientist estimate that only 5% of a normal person's actions are decided consciously? The rest are results of automated processes that make up the so called cognitive unconscious. Civilisation advances create an ever increasing repertoire of human actions that are executed automatically as humans move their conscious mind to be preoccupied with more complex operations that require conscious thinking. Why is this observation so important? Because influences on brain unconscious processes can alter our behaviour so much without us knowing it. This is the key issue discussed in this book. The starting point of the book is that the brain does not function in isolation and that there are many brain processes that take place in the realm of cognitive unconscious. This unconscious is like a back door into our mind that something or someone else can use it to influence us. Richard Restak uses a very scientific approach to introduce the reader in the world of neuroscience using a very user friendly style. While the language is accessible, the argument has scientific quality and he always uses descriptions of scientific experiments conducted elsewhere by well known scientists and research institutions. All the mental processes described in the book are mapped backed to areas in the brain using fMRI technology (functional Magneto Resonance Imaging). The reading will captivate you and sometimes it will surprise you. You will be astounded when you discover how much of what you thought is YOU as a conscious person is based on simple automated circuitry that can be so easily influenced by external factors. The brain is a neutral powerful computing machine that does not make the difference between right or wrong, or internal or external. Starting from simple experiments about subliminal and supraliminal influence, priming and illusion of truth, the author raises the tempo and talks about mirror neurons, more complex models based on emotion and human interaction to show how easily humans can be influenced - if PEOPLE ALLOW IT. This is the good news: you can take action and protect yourself if you understand the possibilities. In a way, this is the opposite of what professional liars do: they convince themselves that what they say is genuinely meant to protect something or somebody. Richard Restak talks towards the end of the book about brain processes related to moral judgement. Here the technology stops being useful: the mixture of "rational" and "emotional" thoughts is so complex that fMRI cannot be used to identify exactly the relationship between different brain areas and how exactly the final result (the thought) is calculated. I felt a little bit that this part of the book lack clarity and conviction; it sounded more "ethical" than scientific compared with the rest of the book. This was probably because these particular brain processes are most complex. It is also true that they appeared relatively recently in the human evolution an
Copyright © 2020 Thriftbooks.com Terms of Use | Privacy Policy | Do Not Sell My Personal Information | Accessibility Statement
ThriftBooks® and the ThriftBooks® logo are registered trademarks of Thrift Books Global, LLC