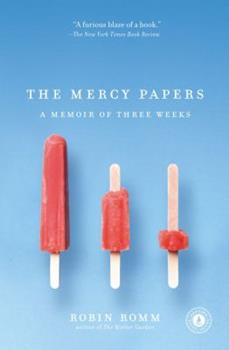 When Robin Romm's The Mother Garden was published, The New York Times Book Review called her "a close-up magician," saying, "hers is the oldest kind [of magic] we know: the ordinary incantation of words and stories to help us navigate the darkness and finally to hold the end at bay. " In her searing memoir The Mercy Papers, Romm uses this magic to expand the weeks before her mother's death into a story about a daughter in the moments before and after...

"The truth of loss is loud and ferocious"

Published by Thriftbooks.com User , 13 years ago
The bond between a mother and a daughter is not easily broken -- not at 40, not at 50, and certainly not at 19, when Robin Romm's mother is diagnosed with stage 4 breast cancer. During the next 10 years, Romm loses her mother by degrees, and, in this memoir, focuses on the last three weeks of her mother's life. This isn't a pretty, sentimental book; some may take offense in the author's focus on herself as her mother gets ready to "set sail". I am not one of them. To me, the book is painfully, grippingly honest: it shows the strong and messy feelings that occur when death reaches in and yanks the one person who is one of the centerpieces of our lives -- our mothers. Romm runs the gamut of all emotions: extreme anger at those who appear to be hastening her mother toward the end, fear of being left alone, vulnerability of watching others, such as her boyfriend, go on with day-to-day lives as she is immersed in the death watch. There is even humor; for instance, Romm hears that when the fingers turn blue, there is only four days left to live. Naturally, she's horrified when she sees that her mother's fingertips are blue, only to find out it's because she was eating blueberries. There is fury here, and awe, and a sense of retreating back to childhood in emotions and thought processes. This is definitely an unflinching look at death; while others prefer to "close the wound, hurry it shut", the author correctedly senses that this loss will be always life-altering. For those who are navigating loss, at whatever age, I also suggest the excellent "An Uncertain Inheritance", a composite of stories by well-known authors about their experiences with various types of loss. The Mercy Papers deserves kudos for its unfailing honesty.

Published by Thriftbooks.com User , 13 years ago
In The Mercy Papers, Robin Romm presents a warts-and-all peek into her and her family's lives during what was arguably one of the most emotionally wrenching events for her family - the prolonged dying and death of Ms. Romm's mother. Surviving for nine years after her diagnosis, Romm's mother Jackie appears to have spent much of that time suffering varying levels of pain and debilitation. While earlier moments during those nine years are referenced, much of the memoir seats itself in the last few weeks, a useful writing tactic on Romm's part, as it helps the reader feel the real claustrophobia that Romm felt herself during that time. And not only claustrophobia, but ennui, which creep in daily, ultimately making participation in any "normal" activities seem like an obscene act. Romm gets across very effectively that horrifying sense of walking in circles, emotionally. In the writing of memoirs such as this one, it can be hard to resist the urge to sugar-coat the events, or place the participants in the best possible light. One has to admire Ms. Romm for her willingness to show every family member - and especially herself - experiencing all the conflicting emotions and thoughts that *do* happen - given her characterization of her own mother as a forthright and frank individual, her approach seems to be a fitting service to her mother, as well as to her readers.

Published by Thriftbooks.com User , 13 years ago
I have just finished reading Robin Romm's memoir and have found it to be a true masterpiece. Ms. Romm's emotions pour out from the pages and her descriptions of everything are clear and easily visualized. She is a master painter, a master gardener, a master knitter of words that evoke an authentic sense of loss and life. Ms. Romm's memoir is a must read. I am a better person for having witnessed her life and connection with her mother through this touching and poignant memoir. Run, don't walk to add this book to your life; you will not be disappointed.

A beautiful and painful book

Published by Thriftbooks.com User , 13 years ago
A description of this book--a daughter's last three weeks with a mother who has been dying of cancer for years--makes it sound grim, but as sad as it is (and it's terribly sad) it is equally beautiful, even darkly funny at times, with the complexities and contradictions of life, death being part of life, no matter how much we might wish it otherwise. Romm is one of those writers who makes it look deceptively easy, because she is uncommonly honest and able to zoom in on the perfect moments to dramatize her story. This is one of the most raw and accurate accounts of grief that I have ever read. You will remember this mother and daughter long after you put the memoir down.

Published by Thriftbooks.com User , 13 years ago
I picked up Robin Romm's memoir with curiosity and put it down a few days later, fully read, with nothing less than awe and admiration. This is not just a memoir of Romm's difficult last weeks with her mother, who was dying from cancer. That alone would have made it a beautiful and moving read, in its detailed and honest approach. But Romm is a much accomplished writer in her own right, and has created here, perhaps inadvertently, a literary tour de force. She does what all writers dream to do: reveal the utter beauty and ugliness of the human condition in a wondrous celebration of love, life, and words. Every line is a gem. --Karen Macklin (journalist, author, and editorial director of Zest Books)
Trustpilot
Copyright © 2022 Thriftbooks.com Terms of Use | Privacy Policy | Do Not Sell or Share My Personal Information | Accessibility Statement
ThriftBooks® and the ThriftBooks® logo are registered trademarks of Thrift Books Global, LLC