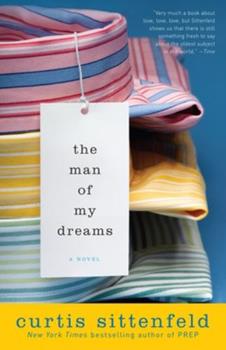 The Man of My Dreams

"Being raised in an unstable household makes you understand that the world doesn't exist to accommodate you, which, in Hannah's observation, is something a lot of people struggle to understand well into adulthood."-from The Man of My Dreams In her acclaimed debut novel, Prep , Curtis Sittenfeld created a touchstone with her pitch-perfect portrayal of adolescence. Her prose is as intensely realistic and compelling as ever in The Man of My Dreams, a...

Published by Thriftbooks.com User , 12 years ago
When I asked my cousin why she got me this book, she said it was because it looked and sounded very cute. That was I believed too on looking at the cover and skimming through the synopsis. However, The Man Of My Dreams was not what it seemed. Contrast to its light-hearted appearance, it was deep, heartbreaking and realistic (since it was so realistic, I have to warn you about somewhat explicit scenes). The story was split into three parts: when Hannah was 14, during her college life and her late 20s years. There were cut between them so you didn't get to learn Hannah's life step by step. Instead, you had to collect the pieces and put them together to have a better view. Also, the effect of the cut was that it kept the readers curious, as for me things were so dreamily that I had to go on reading till I figured out everything. Like one second Hannah was so nervous about her first kiss at college, then a second later she had already been in a relationship with her boss. I also loved the character development in this book. Hannah was a very complicated one. She went from being naive and lonely to doubtful about life, desperate about love and finally, started to learn to be happy. Hannah could have been like any other teenager, but too bad her father's treatment made a big impact on her, especially after her parents' divorce. She didn't think herself as pretty anymore, she felt kind of distant, and had a habit to imagining the future - which always turned out to be dull and calm. She didn't like to be protected, she accepted risky relationship even if it hurt her, partly because she was too afraid to claim happiness. What was the worst that she always saw life in the most miserable way. On reading the book I sometimes found Hannah annoying for she always brought out the bad in stuff, and she was such a coward not to take the chance to get close to Henry - the man of her dreams and make him hers. Then again, I felt bad for her. Hannah was never confident enough to make a move, like she didn't think she deserved happiness at all. Sometimes she did try, but it was too late. The book's ending was so sad. Hannah had yet to find her dream guy and was not even sure when she would fall in love again. But she found happiness and meaning of life. That was what mattered. The book is only 304 page long but you'll feel like it lasts a life time, a life time with so much ups and downs, joys and hurts : )

Published by Thriftbooks.com User , 13 years ago
Wow. I read Prep, and while it was well-written, I thought it was terribly cliched in a lot of ways. The protagonist was a (stereo)typical masochistic adolescent female, and while this may be more a fault of modern society than Sittenfeld's writing, I just didn't have much patience or sympathy for her. She wants to fit in, she wants to be used and abused by The Popular Boy, blah, blah, blah. I'm glad I saw beyond the irritating protagonist and into Sittenfeld's talents, because this led me to read The Man of My Dreams DESPITE the infuriating 'twit lit' (the name i give to so-called "chick lit", or, more accurately, "tedious heterosexual female unliterature") title. WOW. Her second novel succeeds where "Prep" failed. Unlike the one-of-a-million Lee Fiora, the protagonist of TMOMD, Hannah Gavener, is one in a million. She is complex, three-dimensional, furious, fascinating, thwarted, conflicted, and tormented. She is the type of female character that too few writers portray, choosing either to deal with pathetic cliches (ie, either shrieky twitty gossip girls or social climbing overweight sad sacks who hang out with gay men constantly and eventually throw their life away for the first unattractive man who'll "have" them). In fact, EVERY character in this book is multi-dimensional, with the possible exception of Hannah's masochistic mother. I also give Curtis Sittenfeld two thumbs up for her un-cliched and realistic depiction of lesbians, her accurate portrayal of the difficulty of human connection when one is too serious and smart for your own good, and her unflinching examination of loneliness and lack of a silly, happy ending. This book is an absolute gem. If you loved Sittenfeld's writing in Prep but were annoyed with her desperate-to-belong protagonist, you will ADORE this book. If you have never read her writing, but are looking for an alternative to the legions of moronic female main characters in film, TV and books of late, then buy this book.

We are all Hannah

Published by Thriftbooks.com User , 14 years ago
I couldn't put this book down. From the first few pages when Hannah suffers slings and arrows from her mercurial father, I was hooked. Either there are some autobiographical touches or Sittenfeld is just one hell of a novelist because anyone who has experienced what Hannah does will hear the ring of truth like an epiphany. Solid story-telling.

Do NOT Judge This Book By Its Cover

Published by Thriftbooks.com User , 15 years ago
"The Man of My Dreams" is definitely not the bland and banal book that its pedestrian title would imply. As a follow-up to "Prep", once again author Curtis Sittenfeld tackles the turf of a young person's angst. This time however, we get quickly past the protaganist's adolescent years and into young adulthood. "Hannah" struggles with her "issues" with great wit and humor, not to mention insight. An Alaskan camping trip Hannah takes with her sister and two other (male) companions is absolutely hilarious. Yet this is not a silly, frivolous, fluff novel. Sittenfeld's spot-on descriptions of character(s), and Hannah's observations about them are sure to delight, and I can guarantee the reader will recognize some of their own family and friends throughout. (Hannah's "evaluation" of the passive-aggressive nature of her sister Allison is particularly penetrating.) Even peripheral characters like Mrs. Dawes are described in such a way that one can easily visualize the moment and relate. Sittenfeld has won me over; I intend to keep reading for as long as she is inclined to write.

Published by Thriftbooks.com User , 15 years ago
I just love Curtis Sittenfeld! Her main character, Hannah is so realistic and I love how each chapter is a different time in her life. It really keeps it interesting and we really see Hannah grow emotionally and mature into a wonderful young woman. This book never bored me. I loved Prep and this one is a winner as well.
Copyright © 2022 Thriftbooks.com Terms of Use | Privacy Policy | Do Not Sell My Personal Information | Accessibility Statement
ThriftBooks® and the ThriftBooks® logo are registered trademarks of Thrift Books Global, LLC