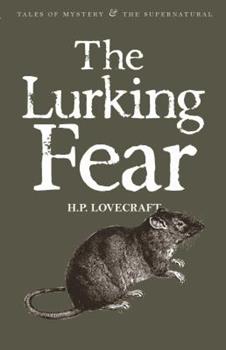 The Lurking Fear: & Other Stories

This description may be from another edition of this product. Twelve soul-chilling stories by the master of horror will leave you shivering in your boots and afraid to go out in the night. Only H.P. Lovecraft can send your heart racing faster than it's ever gone...

Tread Softly on these Pages

Published by Thriftbooks.com User , 15 years ago
(These pages were included in the documents sought out by investigators searching the attic of an original site (439 Spring Street) and then transferred to the Newport Public Library. Excerpts of the personal Journal of F. Mobbs including entries from April-September l934, are now preserved in the Portsmouth Antiquarian Society holdings (East main Road, Portsmouth, R.I.) (ed. note) "The locales about Newburyport (Newport) and Innsmouth (Portsmouth) from the 1920's to late 40's - both barren marshes and windswept heaths with atmosphere flavored with mists from the breakers of Narragansett River are as described - I wandered these environs aimlessly seeking terrain of the most isolate in search of SOMETHING from bleak February mornings into late Summer. No clear vision of the sought for particulars presented itself - only the vague urgings of neuronal, Boolian logics inherited from eons past and hidden securely hinted of a state of my being completely alone - where that expressable now only in seemingly vacuous phrases would manifest itself substantially unfettered by visual and auditroy stimuli yielding the immediacy of distraction. As thaws brought swales and vernal pools through the rotting snow creatures most curious made an appearance - and these I trapped by pail from the unseen depths. Aided by the original Brehm's Aullustrites Thierleben (Leipzig 1883) and Wood's Animate Creation (Selmar Hess, 1898) I fitted these denizens most uncomfortably into known species...but those not to be classified to the Batrachia, Acanthopterygii, Pseudophidia or other Greek or Roman categories sensibly established - those religated in that huge phylum of the unaccountable Chaos - always eluded me. Lone treks on the Carboniferous shales of the beaches and the barren reaches of bedrock on Sachuest Point (near the ominous, boiling river) never yielded the promised quarry. The morphic resonance of Grey Craig (three long shale ridges covered with tortured vegetation bent almost to submission by the prevailing Westerlies) always drew me there at the end my walks. On lone, February mornings I stood at the apex of Hanging Rock (1) in a palpable quiet interrupted only by the ticks of falling snowflakes, and waited... to no avail. Careful searches of the puddingstone ridges did reveal a deep chasm below a sharp declivity (2) whose walls of crumbling shale oozed fetid water in all seasons - illuminated with a yellow green efflugence (some attributed to the rhizomorphs of Armillaria mellea) where my senses indicated a presence unsettling in the extreme of irrationality. One soft, August afternoon, the amniotic air gently warmed and thickened by the nearness of the sun and sea, I wandered - driven by power rules and preferential connectedness - across the narrow link of nodes: the Esplanade and Cliff Walk. Through an arch and on a narrow path and into the essence of perfect experience I drifted in the intoxication of the senses - ahead appeared

Published by Thriftbooks.com User , 18 years ago
...seem to be the focus of many of the stories within this book. The short stories are: The Lurking Fear, Dagon (ocean related story), The White Ship (the oceans within our mind?), Arthur Jermyn, From Beyond, The Temple (ocean related story), The Moon-Bog, The Hound, The Unnamable, The Outsider (an almost SAD story) and The Shadow Over Innsmouth (a must for any fan of Lovecraft).Dagon and The Shadow Over Innsmouth are linked together by the character of Dagon, an elder deep one. The Temple was a new story (to me) and a very interesting one about a German sub that finds...well, I won't tell you, but you can guess.

Published by Thriftbooks.com User , 19 years ago
Despite reading 'The Mountains of Madness'; 'The Tomb'; and particularly 'Pickman's Model' in a brightly lit, populated main hall of the Boston Public Library in mid-day, I was still creeped out of my skin by the writing skill of this author - thus I became an H.P. Lovecraft advocate! But I wanted more. I wanted the full H.P. Lovecraft experience! I decided to read 'THE LURKING FEAR And Other Stories' (c.1939, 1985) by Howard Phillips Lovecraft, overnight in the small graveyard on K & E. 5th streets, adjacent to the grade school I attended as a kid. So with book under arm, I left my local watering hole at last call and walked down a dark street, took a left, and stood in front of the small 1840s graveyard "where deformed trees tossed insane branches as their roots displaced unhallowed slabs and sucked venom from what lay below". Yup, this will do nicely. So I hopped the low black wrought-iron spiked fence, sat down near a street light, coupled with a bright beacon October moon which casted "charonian shadows athwart the low mounds that dotted and streaked the region". I sat on a grave and leaned against a chipped and cracked slate headstone, and in this very un-library like atmosphere, began to read THE LURKING FEAR. I sat comfortably "where the thick weeds grew and cast queer shadows in the light" and suddenly saw a rat run across a nearby grave. Uh, no problem, since rats are as common as seagulls in Boston; I finished part-one of THE LURKING FEAR in dark and shadow, when I suddenly jolted an inch off the grave recoiling my hand like lightning "for it was out of a phantasmal chaos that my mind leaped when the night grew hideous with shrieks beyond anything in my former experience or imagination." The wind had blown a wet leaf on my hand in the dark and I yelped like a puppy. I resumed reading THE LURKING FEAR after my tachycardia and hyperventilation had subsided. The streetlight went out for some unknown reason and I was forced to finish THE LURKING FEAR, appropriately, by moonlight. H.P. Lovecraft was criticized for a wordy adjectival writing style which his proponents, including myself, admired for setting 'atmosphere' to his storytelling. His use of the first person narrative only added to the distance of the author from the reader, so the reader would feel absolutely connected with the characters in the story, and, through analogy, feel the terror they experienced. Other writers of horror, particularly the very ineffective Stephen King, have not mastered atmospheric writing. In THE LURKING FEAR the author conveyed this sense of connection as he brought the reader, through the narrative of his nameless investigator, to Tempest Mountain, then inside the Martense Mansion and in the graves and tunnels of the elusive inhuman quarry. So by the time I finished reading THE LURKING FEAR in this neglected neighborhood graveyard, the author had done his stuff and I was covered in a cold sweat from head to toe. My

Published by Thriftbooks.com User , 20 years ago
Lovecraft is one of the best horror writers ever and this is one of his best collection of stories. I read Poe and Lovecaft long before I ever read a King book, and I still shiver when I read this book. There is a reason that some of Kings short stories borrow ideas from Lovecraft. If you've never read any of Lovecrafts writing give it a try. You won't be disappointed.

Published by Thriftbooks.com User , 24 years ago
As I am confined in a small locked room within a structure called Arkham Sanitarium, I realize that my attempt to relate high praise and admiration for this collection of spectral and macabre tales written by the under appreciated Howard Phillips Lovecraft will be perceived by many as only the ravings of a fanatical individual caught in the tendrils of dementia.That I have been admonished many times by well meaning acquaintances to find more wholesome reading pursuits, is well noted, but against all warnings, I have continued to indulge in reading these narratives, which can only be described as frenzied, yet lucid visions of an author whose mind had dwelled in realms far from a sunlit plane of existence.I do not as yet, understand this compelling force which drives me to set this feverish reflection down for all to see. To describe further the unnameable and unimaginable works of Lovecraft may have the disasterous effect of drawing one into the nether realms of shadowy phantasms and singular landscapes of nebulous chaos. What is this malignant force that impels me to entice unsuspecting neophytes to enter a dimension far removed from any experience associated with convention and rationality? Even more important, can I stop myself before finishing this morbid rumination and perhaps save an unknowing reader from glimpsing apparitions that lurk in stygian shadows?But as I ponder this dilemma it strikes me with numbing insight, the hideous truth behind my obsession to display this account for all to see. The undeniable motive now roars through my consciousness like a horrible peal of thunder. For what insideous reason have I presented this review?One hundred dollars worth of free books. The revelation shocks me back to the cold reality of my bleak confines. But listen...they are coming for me now. I can hear their footsteps in the hallway. I can only sit and wait. Wait and mutter to myself quietly...free books...free books... free books...free..
Copyright © 2020 Thriftbooks.com Terms of Use | Privacy Policy | Do Not Sell My Personal Information | Accessibility Statement
ThriftBooks® and the ThriftBooks® logo are registered trademarks of Thrift Books Global, LLC