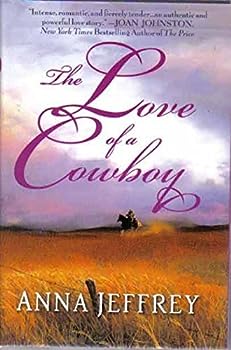 The Love of a Cowboy

(Book #1 in the Callister Series)

This description may be from another edition of this product. For Sarah Hurlihy, taking out a personal ad is a big step in putting her divorce behind her. But it will take a few wrong men-and some tangles with a Saint Bernard-before Sarah begins to appreciate...

Published by Thriftbooks.com User , 17 years ago
It ended too quickly, 2 pages. The last sentence of the book gave me goose bumps though! Wish it would have had an Epilogue or sequel or something more. I don't think they ever did get around to talking much, to get to know each other, like the circumstances of her husbands death. I need to teach my husband that under the table trick he did, sounded heavenly. I look forward to more books from this author, it really was a good book!

HOOKED from the BEGINNING!!

Published by Thriftbooks.com User , 17 years ago
It's rare to find a book that grabs you from the first page, but this is definitely one. It is not a book to pick up if you don't have the time to read it from cover to cover without putting it down. Luke and Dahlia come to life immediately and their characters are believable and complex. It would be difficult to read this book and not relate to each character and the variety of baggage that effects day to day life. Anna Jeffrey did an outstanding job of making the reader become not just a reader, but a part of the story. Her descriptions make both Idaho and Texas come alive. The other characters in the book somehow seemed just as real and important as Luke and Dahlia. (I would definitely like to meet Piggy!!) My biggest complaint about this book is that it ended and I want to know more about what happens to these people I have come to know so well. PLEASE write more, Anna Jeffery!! I can't wait to read more by this unique and talented "new" author.

Published by Thriftbooks.com User , 18 years ago
WOW.....what a supurb book for a first time author. I am a fan for life. I am eagerly awaiting her next novel. I read this book in one night (up until 2 am and chugging coffee the entire next day). I couldn't put it down. I thought about the characters the entire next day. I definetly plan to re-read this one. Trust me, buy this book and you won't be sorry.

Published by Thriftbooks.com User , 18 years ago
This book goes on my shelf to be reread a few times a year.Anna Jeffery has a winner with her debut book, can't wait for her next.The story is about surviving.... the h/h are both tortured souls, survivors from spousal abuse...not physical but definitely mental and emotional.  The sexual language was another thing that jumped out at me...it is bold but not crude.It has its share of secondary characters....a goofy, fun loving, jump in to bed with anything wearing jeans best friend, Piggy....yep, Piggy not Peggy.  A widowed dad that adored his only child for the love of his life, letting her come home to lick her wounds.  A little boy that will struggle for the rest of his life so that his mother could punish his father for not turning all of his money over to her, but Jimmy isn't the main focus on this story...he is only there briefly, the story doesn't revolve around his handicap.  A mother you are happy to hate and I don't mean Jimmy's!  Luke's mother rivals some of the best on our "Mean mother's list."  The picture I carry in my mind of this woman is 6 foot of foul mouth, get her own way, even if it hurts the ones she loves...but wait, she doesn't love anyone but her ranch, her family's reputation and getting her own wayThe heroine, Dahlia is half-Filipino, barely survived a cheating husband, who was killed with a good friend when he was suppose to be on a business trip and bankruptcy; her self esteem has been drug through the dirt.  She let Piggy talk her into spending the summer in Idaho working as Forest Service surveyors with Piggy's cousin. Piggy is out for fun, a little hot sex, she plans to drag her best friend back to life if it kills her.....Dahlia not Piggy!! The hero is a rancher in Idaho....I honestly thought they only grow potatoes there....the authors description of the Idaho had me wanting to visit the mountains.  Luke has barely survived an alcoholic ex-wife, who gave birth to their son, who has fetal alcohol syndrome....Luke is still battling his ex-wife for custody of their 2 teenage daughters after 5 years of being divorced and being the full time parent to them and his son.  Wow, tons of emotional baggage of both sides.

Published by Thriftbooks.com User , 18 years ago
In 1997 Texas, Dahlia Montgomery buries her husband who died in a violent car accident. To her embarrassment she learns that a family friend Bonnie Gibson also died in the crash. Both were under the influence and circumstantial evidence including Kenneth's history leads Dahlia to believe he cheated on her one last time.Twenty eight months later, Dahlia rues the day she agreed to accompany her best friend Piggy Murphy and accept employment as interns in Callister, Idaho. Not only is the place they are staying in freezing, but Piggy's cousin fails to meet them. Worse, angry rancher Luke McRae accidentally knocks her over like a stampeding bull. As Luke and Dahlia become acquainted they begin to fall in love though they stereotype the other. She does not trust men especially cowboys; and he believes outsiders like this Texan belong in the Lone Star State. Then there are his needs to be there for his disable son and two daughters as well as an unstable ex-wife.THE LOVE OF A COWBOY is an engaging contemporary romance that displays rural Idaho in a strong light. The story line is loaded with action and the cast is a strong ensemble. Though the lead characters lug too much baggage, readers will like both of them and especially her best friend. The audience will want to travel just outside Boise for a warm (except in the temporary lodging of the Texans) romantic tale.Harriet Klausner
Copyright © 2020 Thriftbooks.com Terms of Use | Privacy Policy | Do Not Sell My Personal Information | Accessibility Statement
ThriftBooks® and the ThriftBooks® logo are registered trademarks of Thrift Books Global, LLC