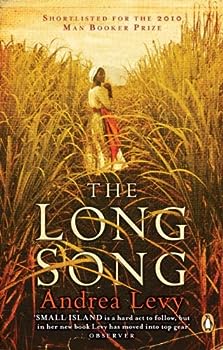 This description may be from another edition of this product. The author of "Small Island" tells the story of the last turbulent years of slavery and the early years of freedom in 19th-century Jamaica.

Published by Thriftbooks.com User , 11 years ago
"The Long Song," Andrea Levy's novel about 19th century Jamaica's slaves and the tenuous freedom they achieved after emancipation in 1838, has a difficult task: to make a reader see anew the conditions of slavery, conditions which have been at the center of novels from Harriet Beecher Stowe to Toni Morrison. She succeeds. Part of the reason is because of the setting. Levy vividly depicts the sugar cane plantations run by British masters and overseers, as well as the patchwork of fragile little businesses run by former slaves in the aftermath of emancipation. There is a wonderful scene in which the master of Amity Plantation, where most of the novel takes place, presides over a Christmas dinner for fellow planters, with heavy, traditional dishes from home dished up by perspiring slaves. The real reason the novel succeeds, however, is because of its narrator, the mulatto house slave July, who writes down her story at the prompting of her prosperous son Thomas. She is often an unreliable narrator, too, glossing over parts too painful to recall until prodded by Thomas to tell the truth. Like many an elderly storyteller, she jumps ahead, meanders, or backtracks, and even moves into the present to complain about her daughter-in-law's cooking. The story that emerges is a powerful one, and since it is told entirely from July's perspective, there is little sympathy for the white masters and mistresses, like the "fatty-batty" Caroline Mortimer, who takes a shine to young July and renames her "Marguerite," thereby lifting her into the relatively privileged stratum of the house slave but simultaneously separating her from Kitty, the mother who loves her. Most of the white characters are so unsympathetic and one-dimensional (selfish, stupid, demanding, greedy, self-pitying) that they are like characters out of a Dickens novel. It is the slaves, in July's telling, whose lives are complex. "The Long Song" is also a novel about the perception of beauty. July's mother was raped by Tam Dewar, the white overseer. The whiteness he bequeaths his unacknowledged daughter is, sometimes, the only "possession" she has, although it also brings sorrow. The relationship between July and the overseer, then master, Robert Goodwin, who becomes obsessed by her, begins with her attempt to learn more about the "Scotch man" whom she has elevated, in her mind, to the position of an absent but caring white father. Throughout the novel, the premium the slaves place on light skin color parodies the white preoccupation with racial categories. The Long Song is on this year's Man Booker longlist. It is in very good company with two other fine historical novels, Peter Carey's "Parrott and Olivier" and David Mitchell's "The Thousand Autumns of Jacob de Zoet. I would hate to have to choose. M. Feldman

Published by Thriftbooks.com User , 11 years ago
This was a delightful read. The main character July is a slave in Jamaica. Her story encompasses her birth, her transfer from her mother to the plantation owner's sister Carol, her affair with Carol's husband and the eventual kidnapping of her daughter be Carol and her husband to England when they leave the island. The storyteller is sassy with an undertone of sadness and wisdom. It brings to light some of the more serious issues of the time such as how slaves were treated, and the attitudes of both the slave owners and lighter skinned (mixed race) native islanders. A word of caution if you have young kids that like to interrupt: read this book after they are in bed. There are details that can be missed and you will enjoy it far better.

Published by Thriftbooks.com User , 11 years ago
This novel pretends to the first-person autobiography of a woman born into slavery in Jamaica who lived through the Baptist uprising of the slaves against the plantation owners. Miss July is writing her own story in her own way with the editorial assistance of her grown son, Thomas Kinsman. But the two disagree on what the story should contain, what are the proper words to use and, indeed, what the actual story is. Thomas, reared by missionaries and apprenticed to a printer of intellectual bent, has a fine education for the time. He's now a man of wealth and substance. Miss July came late to her letters and was only taught enough to help her mistress Caroline keep the accounts on the plantation. She's living on her son's charity. Her tale is bawdy, unabashed and deals honestly with the conditions and aspects of slavery. However, it's not entirely true. Slaves lie to their owners automatically; Miss July embellishes her tale, omits crucial facts and tries several times to quit before the true end of the tale be told. When her son tries to correct her, she screams she is no longer welcome in his house and threatens to decamp. The running battle between artist and editor is a delight and a joy to anyone who has ever suffered editing. Miss July never leaves; truth be told she wants nothing so much as to continue. Whereupon she picks up her pen again and again delights the reader. Her voice is unique, enthralling and despite the grim nature of much of the story she has to tell, hilarious. She gets revenge on her former owners by exposing their ridiculous pretensions to superiority with her savage pen. Her accurate eye is also turned on her fellow slaves: the contest between the butler and the freedman (which involves breaking wind) is one of the choice scenes in all of literature. This author breaks many "rules of writing" and not only does she get away with it; she turns the reader into an eager enabler. Splendid writing, splendid historical background, a real triumph!

Published by Thriftbooks.com User , 11 years ago
If you like a writer who isn't afraid of stepping out of the box in their writing style, you'll enjoy this book. If not, you'll still enjoy it, just have to overlook the quirks of the author. The first chapter may be meant to shock the reader a bit and say "this is not your regular historical fiction offering, get used to it." Some may be put off, but I rather liked it. Offering different versions of the same events adds an even more unique twist. It is a narration and the narrator will interrupt the story once in a while to comment on her telling of it. Adding a little humor and humanity and enriching the story to my mind. Having said all that it sort of feels like I've read this book before even though I haven't. I suppose that is because the story is one that, occurred many, many times over during this time frame, both in America and in other countries as well. It's the telling of this story that makes it different and I do recommend it. It will keep you turning the pages for sure.

Published by Thriftbooks.com User , 11 years ago
"My beloved son Thomas did caution, when first I set out to flow this tale upon the world, that although they may not be felt like a fist or a whip, words have a power that can nevertheless cower even the largest man to gibbering tears." (p. 23) And so the tale of The Long Song: A Novel does flow, without reserve through the voice of Miss July, the heroine of this highly charged historical fiction of slavery, passion, rebellion and freedom in the Jamaica of the 1800s. From the very first pages author Andrea Levy engages the reader by establishing a personal relationship between the narrator and the reader. Miss July speaks directly from the pages to the reader in a charming and rhapsodic manner. Through her eyes we visualize the brilliantly animated, highly believable characters and through her voice authentic and beautifully lyrical dialogue. Her tone is often funny and waggish but more often it is serious and heavy-hearted. With continual prompting from her son Thomas, whose care she is now in, Miss July reveals her extraordinary story in its entirety, from her birth into slavery on a sugar plantation in Jamaica until she is an old but free woman, with her only earthly possessions being a piece of lace and a cracked blue and white china plate. Her story is one of tenderness and poignancy, of simplicity and naivete, but most often a story of abomination and outrage, of pity and fear, of ignorance and mockery. It is a story of love and loss, of subjugation and survival. It is a love song. It is a sad song. It is a freedom song. The Long Song: A Novel is a beautifully composed and uniquely plotted story with a compelling narrative that is lyrical and reads with a calypso-like rhythm. It is because of this musical flow of words that I thought the title was perfectly chosen. The words resonate with pure passion. The descriptive language is so many things at once ~ lush and poetic, simple and honest, or brutal and vulgar, hateful and violent. The story seems to come to life on every page, evoking powerful emotions. The Long Song: A Novel is a brilliant piece of historic fiction which speaks with a voice of authority on 19th century Jamaica. I loved this novel and I am very impressed with Andrea Levy's great gift for clever storytelling. I will enthusiastically look for her other titles. In the meantime, I am very glad to have experienced this remarkable novel and without hesitation give it 5 stars and my highest recommendation.

The Long Song Mentions in Our Blog 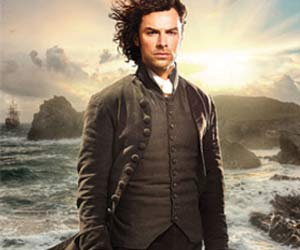 15 Marvelous Book-to-Screen Adaptations from Masterpiece
Published by Ashly Moore Sheldon • May 25, 2021
And in the category of our favorite things: Book-to-screen adaptations! For over fifty years now, Masterpiece (Formerly Masterpiece Theatre) has been bringing fantastic novels to the small screen in the form of series, miniseries, and movies.
Read Article
Copyright © 2020 Thriftbooks.com Terms of Use | Privacy Policy | Do Not Sell My Personal Information | Accessibility Statement
ThriftBooks® and the ThriftBooks® logo are registered trademarks of Thrift Books Global, LLC