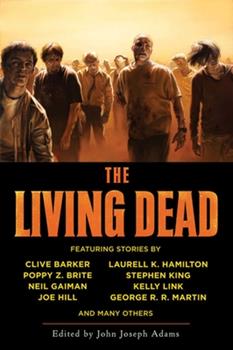 Ideal for fans of iZombie, Colin Morgan, The Walking Dead, iZombie comics, Resident Evil anthology, Evil Dead anthology, and the Joe Hill graphic novel collectionA compilation of the best zombie literature of the past 30 yearsHighlights works by today's most well-known and respected authors of speculative fiction, horror, and fantasyZombies have invaded popular culture, from White Zombie to Dawn of the Dead and from Resident Evil to World War Z. They...

Published by Thriftbooks.com User , 12 years ago
If you enjoy the zombie genre, you will like this book. Many stories by many authors means that you are very likely to find more than one story that you will enjoy.

A must have for the zombie fans

Published by Thriftbooks.com User , 13 years ago
The living dead is an anthology containing stories about zombies, not only the shambling brain eating romero kind, but also voodoo zombies, supernatural zombies and even brainwashed zombies. Anthologies usually contain one or two good stories, several 50/50 and several bad ones. That's not the case with this one, since it only contains one story I would call bad. There are a couple that leave you wondering what they're about or what sense they make, but even those are beautifully well written. Some highlights include: This year's class picture: the first story in the book, about a teacher who's trying to do what she does best after the zombie apocalypse. Beautiful and hopeful. Some zombie contingency plans: this is the only story I completely disliked. There aren't even zombies in it, just some guy who thinks about zombies a lot. Death and suffrage: the dead come back to vote. Despite the silly sounding premise, it's a very interesting story. The dead kid: a coming of age story who happens to involve a zombie kid, and a living who turns his life around thanks to him. Stockholm Syndrome: a very powerful story about a lonely man holed up in a house during the zombie apocalypse, trying to determine if there's a difference between himself and the dead. Packs quite a punch. Bobby Conroy comes back from the dead: an unusual story in that it doesn't involve real zombies, just a boy and a girl who meet again after many years in the set of one of Romero's movies. Pretty good read, written by Joe Hill, a very promising author, in my opinion. Home Delivery: Stephen King writes about a pregnant woman who lives in an island town that somehow managed not to get hit so hard during the zombie outbreak. Very good, but you already knew that when you read who wrote it. Dead like me: this is an extremely good story that it's hard to read. It's about how far would you go, and what you would do in order to survive. It's the only story that stayed in my mind for some time after reading it. Beautiful stuff: the dead are brought back by politicians to try and sway public opinion, but one of the zombies has his own opinions he wants to share. Makes you think about the important things in life. How the day runs down: the last story in the book, is a monologue by the stage manager from "Our town" recounting the zombie outbreak from 2 or 3 points of view. Very powerful, especially the part about a couple and their children living in what they tought was a safe neighborhood. The stories in this book look at the living dead from all possible angles, from zombie apocalypse to zombies as a business or workforce, to dead people who come back from the grave to seek justice. To put it shortly, if you like zombies, you'll like the stories in this book.

Published by Thriftbooks.com User , 13 years ago
For a big book of zombies you can't get much bigger than this massive 500-page slab of living deadness, fresh from the bookshelf of industrious anthologist John Joseph Adams. Here we have a collection of speculative zombie literature that tends to deal with what's left of humanity after whatever Zombie-fried disaster wrecks civilization. In a few tales you don't even see the actual zombies, but follow characters who know the undead are afoot. You'll notice some reviewers here whining that most of the stories don't reflect the bloody brainmunching of classic George Romero films. Fair enough, but stereotypical and simplistic motifs lead to diminishing returns for writers and readers. This anthology is for the thinking undead fan, with short stories by some of today's most creative horror and fantasy writers. As with any anthology collecting dozens of stories from writers of many muses, there are some duds here, with a few writers getting carried away with thin post-apocalyptic social construction. Also, some pretty old classics from Clive Barker, Stephen King, and a few other well-established writers are probably here for the marquee value. But otherwise, this is an almost uniformly exciting and haunting collection, with the authors twisting the shopworn zombie motif into refreshing new speculations on the human condition. Dan Simmons and Will McIntosh deliver especially rewarding ruminations on how regular non-undead folks will carry on after the zombie armageddon, while Nina Kiriki Hoffman and Susan Palwick apply that same type of holocaust to pressing real-world political issues. There is also a great amount of fun creativity here, like Joe Hill's look at extras on the set of Romero's classic flick, Joe R. Lansdale's undead shoot-em-up western tale, and especially Poppy Z. Brite's reconstruction of Calcutta's homeless as a zombie army commanded by a bloodthirsty Hindu goddess. If your love of zombies is as narrow-minded as the zombies themselves, then shamble off elsewhere. Adventurous readers will find big squirming piles of (re-)animated talent and excitement here. [~doomsdayer520~]

Published by Thriftbooks.com User , 14 years ago
What could be more enjoyable than a Zombie story anthology? How about enjoying one during and after Hurricane Ike, with no power and candlelight?? How about one that includes three of my all-time fav authors (Dan Simmons, George R. R. Martin and Stephen King)? How about one nearly 500 pages long (at least the ARC is)? How about one edited by John Joseph Adams, who also brought us the anthologies Seeds of Change and Wastelands (which, yes, I need to finish). Many of these stories have been previously published, but almost all were new to me. One obvious component: sex angles and zombies seem to mix. Not all include that perspective, but this is certainly not PG-13. My favorites from this LARGE collection were Ghost Dance by Sherman Alexie, The Third Dead Body by Nina Kiriki Hoffman, Malthusian's Zombie by Jeffrey Ford, Home Delivery by Stephen King, Deadman's Road by Joe R. Lansdale, The Song the Zombie Sang by Harlan Ellison and Robert Silverberg. This review originally appeared on duskbeforethedawn.net.Thoughts on each story: * This Year's Class Picture by Dan Simmons: the author of the Hyperion series plus the Illiad/Olympus duology tells the tale of Ms. Geiss, teacher extraordinaire, continuing to teach her class and recruit new students even though they and most of the rest in the city are dead and zombies. The repetition of the lessons and Ms. Geiss persistence are well told. * Some Zombie Contingency Plans by Kelly Link: interestingly written and well paced story of Soap the ex-con with a painting, who always has a contingency plan against zombies and several other possibilities; the ending threw me (re-read the final paragraph until my eyes hurt), but the journey to the end was enjoyable, as Soap crashes Carly's party and cons her. * Death and Suffrage by Dale Bailey; zombies dig their way out to vote, based on a presidential campaign manager's repressed memories being brought to the fore after a little girl's accidental shooting. If only the dead would vote this November... * Ghost Dance by Sherman Alexie; one of my favorites, though I wish it were longer. Custer's army arises from the dead, drawn by murdered Indian blood, and an FBI agent named Edgar (not Mulder) has visions of their lives and the damage/murder that they do. * Blossom by David J. Schow; okey-dokey! A little kinky sex gone awry turns a beautiful girl into a dead girl and then into a man-eating zombie. Descriptive, to say the least! * The Third Dead Body by Nina Kiriki Hoffman; a zombie story from the zombie's point of view; a murdered hooker, cursed by her voodoo grandma, must love the man that killed her and rises from the grave to find him. Very well written and entertaining. * The Dead by Michael Swanwick; the third zombie + sex story in a row, interesting grouping, Mr. Adams. The business side of using cheap zombies for everything - factory workers, stunt doubles...and, yes, as call girls/guys. Good character work in this story. *

Published by Thriftbooks.com User , 14 years ago
Yes, some of the stories that are in the book have been published before in other compilations, the editor even states this in the beginning, however, 'The Living Dead' is an absolute must-have for anyone who is a fan of zombies. You can not go wrong here. I would have paid this price if only for Dan Simmons short: 'This Years Class Picture'. I cried...Is that even possible in a zombie short? I can't believe that Dan Simmons name isn't on the cover, after all, A Winter Haunting is like one of the best ghost stories ever. There are numerous shorts that can be found here: This Years Class Picture -- Dan Simmons Some Zombie Contigency Plans -- Kelly Link Death and Sufferage -- Dale Bailey Ghost Dance -- Sherman Alexie Blossom -- David J Schow The Third Dead Body -- Nina Kiriki Hoffman The Dead -- Michael Swanwick The Dead Kid -- Darrell Schweitzer Malthusians Zombie -- Jeffrey Ford Beautiful Stuff -- Susan Palwick Sex, Death and Starshine -- Clive Barker Stockholm Syndrome -- David Tallerman Bobby Conroy Comes Back from the Dead -- Joe Hill Those Who Seek Forgiveness -- Laurell K Hamilton In Beauty, Like the Night -- Norman Partridge Prarie -- Brian Evenson Everything is Better with Zombies -- Hannah Wolf Bowers Home Delivery -- Stephen King Less Than Zombie -- Douglas E Winter Sparks Fly Upward -- Lisa Morton Meathouse Man -- George R R Martin Deadman's Road -- Joe R Lansdale The Skull-Faced Boy -- David Barr Kirtley The Age of Sorrow -- Nancy Kilpatrick Bitter Grounds -- Neil Gaiman She's Taking her T[..]s to the Grave -- Catherine Check Dead Like Me -- Adam-Troy Castro Zora and the Zombie -- Andy Duncan Calcutta, Lord of Nerves -- Poppy Z Brite Followed -- Will McIntosh The Song the Zombie Sang -- Harlan Ellison and Robert Silverberg Passion Play -- Nancy Holder Almost the Last Story by Almost the Last Man -- Scott Edelman How the Day Runs Down -- John Langan
Trustpilot
Copyright © 2022 Thriftbooks.com Terms of Use | Privacy Policy | Do Not Sell My Personal Information | Cookie Preferences | Accessibility Statement
ThriftBooks® and the ThriftBooks® logo are registered trademarks of Thrift Books Global, LLC