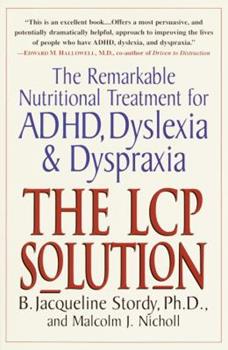 The Lcp Solution: The Remarkable Nutritional Treatment for Adhd, Dyslexia, and Dyspraxia

by Malcolm J. Nicholl and B. Jacqueline Stordy

This important new book documents a major breakthrough in the treatment of the three most widespread learning disabilities--ADHD, dyslexia, and dyspraxia ("clumsy child syndrome"). Although these conditions have reached epidemic proportions, treatment has been limited to ineffective behavioral therapies or the controversial prescription drug Ritalin. Now Dr. B. Jacqueline Stordy, a leading researcher in the field, reveals a stunning new treatment...

Published by Thriftbooks.com User , 20 years ago
Is it possible to rate a book higher than 5 stars? When I first read this book, my first reaction was anger. I was mad, because I had never heard of most of the information in this book. This stuff SHOULD be in the public domain. Why hasn't the media reported on any of these studies? Then I thought about it. If this stuff really does work, many companies stand to lose significant billions of dollars in revenue from the sale of ritalin and aderall.My next reaction was great joy. Finally, there was hope. No drugs, and still helpful. This was too good to be true. So, I tried it. First on myself (I was diagnosed as hyperactive and put on ritalin when I was 5 - there was no ADHD yet in those days.). After a week of supplementing, I found I was able to concentrate like never before. Both the quality and quantity of my work have greatly improved. I figured if it helped me, maybe it would help my son. He has sensory integration dysfunction, ADHD, and a few other problems. I started supplementing him on Sunday. When I dropped him off to school the next Thursday, his kindergarten teacher took me aside and asked if my wife and I were doing anything differently with him, therapy wise. At first, I forgot about the LCP's and said no. I asked her why. She said that it had been my son's best week of the school year (it was April). He was concentrating much better. He was able to complete his school work. He was speaking much better and much clearer. He was able to follow directions. He was getting along with the other kids. He had far fewer fits. In her words, it was like we had transformed him into a different child. I then remembered the LCP supplement and told her about it. We came to the conclusion that since that was the only different thing, that must be responsible for the difference. Our family life is also improved. He has fewer fits. He is able to handle change much better. When he wants to, he is able to concentrate much better. He is also learning at a much more rapid pace and has caught up to and surpassed many kids his age, academically.Thank you Dr. Stordy.

Published by Thriftbooks.com User , 21 years ago
The nutritional supplements/LCP's described by Dr. Stordy and Malcolm Nicholl have improved the quality of our family life, since they've helped our youngest child, Kelli, so much. Efalex (one of the LCP's described in the book) has helped Kelli progress in speech and other motor activities way beyond our expectations -- with no adverse side effects. Her brain just seems to work better when she is taking LCP's. Our Kelli is now almost 8 years old. She was diagnosed with Apraxia (also called Dyspraxia) about 5 years ago. Because of this apraxia, she was not able to learn to speak by imitating others, as most children do. She had to learn to pronounce every sound and every blend during hundreds of hours of speech therapy. After one year of this therapy, I was getting very discouraged at her slow progress. Then I heard of Dr. Jacqueline Stordy's research and development of Efalex, a homeopathic medicine that helps lubricate the synapses/brain wires by providing extra amounts of tuna and other oils (this is truly a layman's description!) Kelli began showing dramatic improvements within just 6 weeks of beginning to take Efalex. This book discusses how changes (increased pressures) in our lives could be one cause of the dramatic increase in the number of children now diagnosed with disabilities. The authors present info very concisely on the developing brain's nutritional needs. (I only regret that this book was not available years ago so I would have known how beneficial LCP's are to pregnant and lactating women!) They discuss ways to recognize ADHD, dyslexia and dyspraxia/apraxia), and ways to make life easier for these children and their families. The importance of networking (especially via the Internet) for parents of children with disabilities are emphasized -- and specific resources are listed. After Kelli had taken LCP's for just a few months, I was still amazed at how many ways Kelli was showing improvements. I wrote Dr. Stordy to congratulate her on her abilities to positively affect so many children with brain disabilities. She arranged to meet Kelli and I when she was next in our area. It was a pleasure to meet such a woman who combines being so personable and scientifically knowledgeable! Kelli instantly liked her. Dr. Stordy reminded me of a concerned grandmother who wants the best for everyone in her family. (In fact, her research to develop Efalex began because she wanted to help family members with night blindness and dyslexia.) More and more nutritionists are coming to agree with Dr. Stordy's discoveries. I highly recommend this book for anyone who cares for a child who has trouble speaking, reading, or focusing. The numerous personal stories shared throughout the book made it even more interesting (Kelli's story is on page 287). Parents share success stories of awesome and unexpected improvements their children made after beginning to take the LCP/EFA supplements she developed. It's heartwarming

The place to start if your child is having problems

Published by Thriftbooks.com User , 21 years ago
This book provides and excellent integration and summary of the research pointing to the critical role of long-chain polyunsaturated (LCP) fatty acids (EPA, DHA, AA) in the development and function of the brain. Pulling together basic science, case studies, and clinical trials from a variety of fields, the authors take the reader on a journey of discovery that both educates and intrigues. The authors not only make a compelling case for trying LCP supplements as a first line treatment for ADHD and other neurologically based disorders, they also provide a wealth of resources, product reviews, and protocols of immediate practical value. Millions of parents are desperately seeking ways to help children who are struggling socially, emotionally or academically, without resorting to drugs. I strongly recommend that they start their search for safe, natural, and research-based solutions by reading this book. Martha S. Lappin, PhD Research Psychologist President, Alternative Health Care Research, Inc. Co-publisher of the quarterly newsletter: "Helping Kids with ADD: Alternative Approaches to Optimal Health and Peak Performance" and the annual conference of the same name.

A guide to LCP supplementation that nobody should be without

Published by Thriftbooks.com User , 21 years ago
The LCP SolutionThis book is a must read for anybody with a child with any type of a childhood disorder, not just the ones mentioned. (Dylexia-ADD/ADHD/ and Dyspraxia) I am a grandmother who was looking for a way to help my grandson who was diagnosed with Verbal Apraxia. I started down the long road to learn about LCP's and their benefits for children. I joined a listserv that is discussed in this book called Speech Diet. There were numerous testimonies to the fact that LCP supplementation of some form is helping these children. In layman's terms, LCP's help their neuro transmitters to make the connection, so they no longer have so many faulty wires. Many of these disorders, the cause is never known. I say that God must have gotten one of the wires crossed. Knowing the how does not seem to matter so much, but knowing how to help these children does. I focused on how to best help my grandson. Oh how I wish Dr. Stordy's book would have been available then. She has answered so many questions, offered various forms of products available on the market, and could have saved me many days, weeks, months, of research on my own. I have always followed Dr. Stordy's research throughout my studies of LCP's, so I was very eager to read her book. She has a wonderful reputation in the LCP world, and her name is used often in referring to LCP's, which are sometimes called EFA's. (Essential Fatty Acids) Her book brought many things into perspective for me and was well worth the wait. Dr. Story and her co-author, Malcolm McNicoll, have done a wondeful job of explaining how LCP's can benefit not only these children, but everybody. When you have finished reading this book, most of your questions should be answered.

LCP's DO HELP BEHAVIOR PROBLEMS - MY SON IS IN THIS BOOK!!

Published by Thriftbooks.com User , 21 years ago
I have talked to Malcolm Nicholl a few times, and Kyle and I are in this book (page 279 if anyone is interested!). This book does an excellent job of bringing together current availabile information on LCPs and the results that can be obtained by taking them. Results are not guaranteed, of course, and finding the cause of ADHD behavior in each child instead of simply treating the symptoms is like a jigsaw puzzle - there are so many pieces to the puzzle and a certain piece may fit my child but not yours. However, there is a wealth of scientific evidence that points to a LCP deficiency (especially in boys) as being a major component in behavior problems. The "Networking" chapter in this book is excellent also, and gives many websites and organizations that readers can access for information and support. I started my 6 yr old son on Omega-3 and Omega-6 fatty acids last year. He was having out of control rages 1 - 3 times per day that lasted 1 - 2 hours long. These rages were complete with hitting, scratching, spitting, arguing, yelling, destruction, etc. We could not take him anywhere and had no life. He was acting up in kindergarten, disrupting the class, hitting the other children, etc. We were at our wits end. Then I started reading bits and pieces about LCPs from numerous ADHD and behavorial message board posts from parents who were seeing improvement in their child's behavior after using LCPs. So I started him on Efalex, which is an LCP product mentioned in this book. We noticed a major improvement after only two weeks. He was compliant, argued MUCH less, said he was sorry, and the out of control behavior stopped. He still takes Efalex, and without LCPs I know my son would be in an institution by now. I highly recommend this book to anyone with a child with behavorial problems or someone with dyslexia or dyspraxia. This book contains information that took me over a year and countless hours to glean from various sites on the Internet. "The LCP Solution" is not so technical that it is boring or not understandable. Dr. Stordy and Mr. Nicholl have brought together available LCP information in one concise, understandable and very readable book. Every time I read a post on one of the many ADHD message boards I am on about an uncontrollable child, I always post an answer to the parent suggesting LCPs as a possible solution. Now I can also add a recommendation for them to read this book.
Trustpilot
Copyright © 2022 Thriftbooks.com Terms of Use | Privacy Policy | Do Not Sell My Personal Information | Accessibility Statement
ThriftBooks® and the ThriftBooks® logo are registered trademarks of Thrift Books Global, LLC