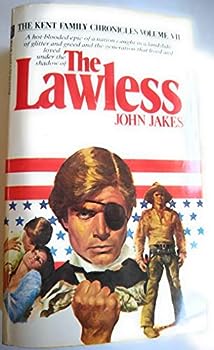 The Kent Family Chronicles continue as Jeremiah Kent becomes an infamous shootist in the Wild West-bringing him closer to a destiny that will end in bloodshed. This description may be from another edition of this product.

Published by Thriftbooks.com User , 19 years ago
Matthew Kent, son of Jephtha Kent, is in Paris, happily pursuing the life of one of the new "bohemian" artists and befriending many of the new and promising artists of the time-Cezanne, Manet etc. and rather daringly having a live-in mistress.He becomes involved with a sadistic and violent agent of Bismarck (chancellor of Germany)and is forced to flee the country. Dolly, his mistress, becomes pregnant and insists that they marry to avoid the stigma of bastardy for their child.Their marriage doesn't survive so Dolly takes their son Thomas with her to India where she is employed as an English teacher.Matt returns to America briefly but decides that his future lies in Europe. Gideon makes an implacable enemy of millionaire businessman, Thomas Courtleigh who does all he can to destroy Gideon and his business by attacking his family, causing the death of his wife Margaret. On the same night, Gideon's daughter Eleanor is pack raped , causing irreparable damage to her self esteem. Eleanor leaves home at an early age, joining an acting troupe,and therebye relinquishing respectability as it was known in that era.After Margarets death Gideon is able to marry his longtime mistress, Julia Kent, widow of his cousin Louis and takes on the responsibility of her son Carter.

Published by Thriftbooks.com User , 19 years ago
One of the more successful Kent books. The sons of Jephtha Kent -- who is conveniently (and oh too quickly) killed off -- reap what they have sown. The lawless Kent of the title is Jeremiah, the gunslinger-gambler. Jakes cleverly manipulates other members of his cast to come in contact with Jeremiah without knowing who he is; first Julia on her suffragist tour of the Wild West, and then brother Gideon, with tragic results. The travails of Matthew Kent allow Jakes to explore nineteenth-century Paris, but the author is more successful detailing the great Chicago Fire of 1871 and early union uprisings than the Parisian bohemian art world. Gideon Kent's story takes up the bulk of the book: his wife's madness (which I have trouble buying, even though her father was a drunk and alcoholism is supposed to be hereditary), his affair with Julia, his estrangement from his children, his pro-union sympathies, and his conflict with the railroad giant Courtleigh. Gideon's descent into conservatism is less abrupt than Philip Kent's in The Seekers, and therefore more realistic, but equally annoying. The abrupt about-face by Dolly when she decides to leave Matthew seems out of character: I feel like Jakes is setting up her son Thomas to take part in raj activities in India for a future book never written. Eleanor the budding actress is also a believable character, but her last-minute reconciliation with Gideon is even less convincing. The Lawless has less in the way of canvas and sprawl than The Warriors (for instance), and Jakes seems to be truly interested in character development over episode, perhaps for the first time in the series. Unfortunately, none of the characters is as compelling as Amanda Kent in The Furies --and Jakes chooses to relegate the women to a secondary position.

awesome, read all 8, the story gets better and better....

Published by Thriftbooks.com User , 20 years ago
maybe my favoite of the 8, it is hard to decide, they are all great and together an awesome read....

awesome, read all 8, the story gets better and better....

Published by Thriftbooks.com User , 20 years ago
read all 8 and you will feel like a kent yourself....

Published by Thriftbooks.com User , 22 years ago
The Lawless by John Jakes is an excellant book. First for it's faithfulnes to history and second for the ingenious way that Jakes is able to weave a fictional plot into a factual accounting. Reading any of the "Kent Family Chronicles" is like attending the most entertaining American History class ever created. I highly recommend. this title. A reader would be well advised to start at the beginning of the series to avoid missing any of the family sub-plots that keep this book, and the series, so enjoyable. When I was done reading the book I felt that the Kents had become people that I knew and I was sad that I could not continue along with them in their lives.
Trustpilot
Copyright © 2022 Thriftbooks.com Terms of Use | Privacy Policy | Do Not Sell My Personal Information | Cookie Preferences | Accessibility Statement
ThriftBooks® and the ThriftBooks® logo are registered trademarks of Thrift Books Global, LLC