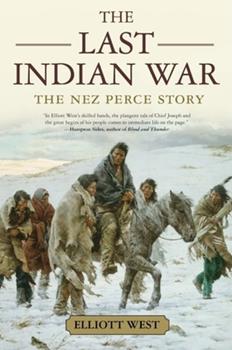 This newest volume in Oxford's acclaimed Pivotal Moments series offers an unforgettable portrait of the Nez Perce War of 1877, the last great Indian conflict in American history. It was, as Elliott West shows, a tale of courage and ingenuity, of desperate struggle and shattered hope, of short-sighted government action and a doomed flight to freedom. To tell the story, West begins with the early history of the Nez Perce and their years of friendly...

Published by Thriftbooks.com User , 12 years ago
Is there anyone on this earth that has been so totally stripped of their possessions, culture, religious practices, property, food sources, and generally suppressing their total way of life ? You hear different ethnic groups complaining about this, that, or another. They all pale in comparison to the SINS committed against these peoples. I'm sorry I understand that this is a review section, but I just felt compelled to say it. Great book.

Published by Thriftbooks.com User , 12 years ago
This is a detailed and well researched telling of a sad time in our history. More than any other Indian event, how our country treated the Nez Perce Indian tribe is the most regretable. And, this book does an excellent job of laying it out. The book has three parts. The first part provides a lead in to the war that our government had with the Nez Perce Indians. During this section, the first meeting with Lewis and Clark, the continuation of the experience with the fur trade, the missionaries and then the first strike of gold in Idaho that caused the disruption leading to the war are shared. This leads to the so-called treaty of 1863 which the non-treaty Nez Perce never supported and signed but were required by our government to follow. There were a number of interesting insights provided in this section. One shared that this war was actually a religious war between Christianity and Nez Perce religion. Unlike the rest of the country, where religious freedom was allowed, with the Nez Perce were forced to become Christians. Another interesting insight was that at the same time, a war was being fought to free the slaves, the situation was being set up to force the Nez Perce into a way of life that they didn't want - was this a form of slavery? The second part deals with the war itself. I've read a couple of books on the events of this war, and this is the most detailed and well researched description that I have ever read. The massacre of the civilians in Idaho that started the war, the major battles and the traveling from Idaho, through Yellowstone National Park (which was just set up at that time) and Montana are all provided in detail along with a lot of insight on what the leaders of Nez Perce and military were doing and most likely thinking. One interesting insight in this section was that Chief Joseph was not the war leader that he was portrayed to be after the war. In fact, war leadership went from chief to chief depending on their knowledge and ability to be lead. Chief Joseph was not the "Indian Napoleon" as many sources have depicted him as. The third part deals with the events after the war. This starts with the battle at Bear Paw, and the promise by Miles and Howard to bring in the Indians back to their homeland territory in Idaho and Northwest Oregon. This promise was part of the surrender agreement by the military and it was not honored. Chief Joseph purportedly said when they were taken to Oklahoma, "when will the whites keep their word". Further, there is a lot on the famous statement from Chief Joseph: "from where the sun now stands, I will fight no more forever". Did he say it? And, looking back, its relationship to all Indian fighting in the west, because this was the last major Indian war. And, this was a regretable period of our history. We have nothing to be proud of when revisiting this story. Chief Joseph never did return to his home. He died in Western Washington. Some of the other Indians return

Published by Thriftbooks.com User , 13 years ago
Not since I read Bury My Heart at Wounded Knee by Dee Brown has a book about the plight of the Native Americans so consumed me. Elliot West's The Last Indian War is an easy read for the lay-person, yet well-researched and documented enough for even the most persnickety historian. I was emotionally touched by the simple life of these people and found myself cheering for the Nez Perce knowing full well that they never made it to the freedom they so desired. These people befriended Lewis and Clark and remained peaceful for decades with the whites until finally forced into retaliation for the many broken treaties and abuses by the U.S. Government and the unquenchable greed for land and gold by farmers, merchants and gold miners. The Nez Perce--forced to flee for their lives with only a few possessions were finally overcome, not by a superior fighting force, but by new technologies such as the Gatling gun, the telegraph, and the railroad. Elliot West tells the story of these spiritual, proud people not to elevate them or to demonize the U.S. Army, but in a factual, detailed accounting of Western expansion by a country destined to engulf everyone that stood in its way. In the words of Thomas Jefferson, "Life, Liberty, and the Pursuit of Happiness," were words extended to the freed slaves on the one hand, but taken from the Native Indians with the other hand. West weaves the cultural, political, technological, and emotional themes together into a book worthy to be called a Western epic.

Published by Thriftbooks.com User , 13 years ago
In "The Last Indian War," West has brought his exceptional storytelling skills to a compelling group of nineteenth-century Americans. I was particularly impressed at how he blended political and technological forces from across the country and at times around the world with the Nez Perce tale, demonstrating how they were connected to broader issues of the day rather than treating them like an anachronistic group, as is so often the case in Indian history. By demonstrating the complicated nature of the Nez Perce's existence, and their struggle to retain independence from various Euro-American competitors, West has created a work that will stand not only as an excellent narrative of that society but also a model for other historians of how to tell more complete, overarching cultural stories.

Fresh approach to an important story

Published by Thriftbooks.com User , 13 years ago
The tragic story of the flight of the Nez Perce--a people long at peace with the United States--is familiar to most students of Western American history, a coda of deceit and betrayal so typical of relations between Indian peoples and the federal government. Elliott West's "The Last Indian War" recounts, in crisp and accessible prose, that story. But unlike many "popular" historians, he is also interested in more than just rehashing the same narrative for a new generation of readers. West sees the Nez Perce War as emblematic of deeper social and political changes that forever altered the course of the nation from the 1840s-1877, a period West argues should be known as the "Greater Reconstruction." This period saw the extension of the nation to the Pacific, the battle between regions and the increasingly powerful federal government, the spread of information and transportation technology, and most importantly, in West's view, a grappling with the meaning of citizenship and the inclusion of both newly free African-Americans and Indian peoples, the former willingly and the latter reluctantly. West has always been a master at showing the connections of seemingly unconnected events and in this book he uses O.O. Howard, particularly, to show both the issues facing freedmen in the South and Indians in the West as Howard was a crusader for African Americans (leading the freedmen's bureau and founding Howard University) and the officer in charge of capturing Joseph and the Nez Perce. West has written a book that should appeal to both serious scholars, who will find it especially useful for upper-division history classes, and those general readers who enjoy works by writers like Stephen Ambrose and Jeff Shaara.
Trustpilot
Copyright © 2022 Thriftbooks.com Terms of Use | Privacy Policy | Do Not Sell or Share My Personal Information | Accessibility Statement
ThriftBooks® and the ThriftBooks® logo are registered trademarks of Thrift Books Global, LLC