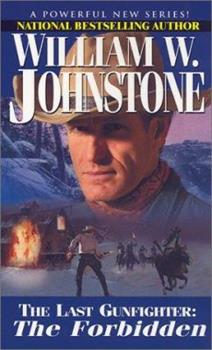 The Forbidden (The Last Gunfighter, Book 4)

(Book #4 in the The Last Gunfighter Series)

This description may be from another edition of this product. Outlaws smashed his life, left his wife dying, and took his young son. Now all Frank Morgan wants is to hang up his guns and settle down. But when he rides into the middle of a Montana range war, his...

First one I read and won't be the last!!!

Published by Thriftbooks.com User , 12 years ago
This is the first book in the series I read and was instantly hooked! Frank Morgan is my Hero!

"You picked the wrong side in this fight."

Published by Thriftbooks.com User , 16 years ago
When it comes to Westerns this one is excellent.Johnstone has that special knack of being able to tell it like it is, at the same time as being able to tell it like it was.Once you get into the story,and that takes only about 2 pages, it is hard to put down.I don't know what it is,but Johnstone breaks up this story of 240 pages unto 32 chapters.That approach results in him having to keep something new coming and the story moving right along.Hey,he isn't the first to use this approach,after all,wasn't the Bible written this way?If you want an example to follow,it's not a bad choice.The copy I have is a Collector,s Edition and included a 6 page Afterword by the author.I enjoyed it immensely and he tells us a bit about himself and why and how he got into writing Westerns.Along with great stories,Westerns usually have some excellent artwork on their covers;this one is super.It would be good if a little about the artist was included. I once read that all novels really fall into two types: A-- A man went on a journey and B-- A stranger came to town This one seems to fit both bills;but is really type B. As I read this story I was reminded of the verse: "Yeah,though I walk through the Valley of Death I fear no Evil 'cause I,m the meanest S.O.B. in the valley! It didn't take Colonel Trainor,Gilmar,Bullard and their gunhawks long to find that out, when they decided to mess with Frank Morgan. A couple of good lines Johnstone gives us are: "Stand still and listen and live or grab iron and die,Morgan,"the voice said,"It,s your choice."How little he realized what was in store for him. "Think about death,boy," Frank told him."Give it some hard thought.Dead is forever,boy.Do you realize that?" While some novels seem to need steamy encounters,Johnstone can say it all with: "Frank grabbed her and pulled her down on the sofa.One thing led to another..." "Frank once read about some fellow way back centries ago who was asked if he was afraid of something that faced him.No,the man said.He wasn't afraid of anything in the future,only what was behind him." Frank knew that would be true as he continued his journey out of the valley. If you want to read a good Western,you'll not go wrong with this one.

Published by Thriftbooks.com User , 18 years ago
Frank Morgan would rather put up his guns and live in peace, but outlaws have smashed his life, seriously injured his wife, and taken his son. Now he rides into a valley busy with a range war. Fortunately for Frank his reputation has preseeded him. The battle is on and Frank needs to make some quick hard decisions in order to confront all the danger.

Published by Thriftbooks.com User , 18 years ago
I was so impressed with this series I e-mailed the author to let him know just that.Frank Morgan, is at it again and won't back down from some pushy ranchers that think they're above the law. As well as some wantabe famous gunfighters looking for a reputation. You won't be able to put it down once you get started. It keeps you on one heck of a ride and Mr. Johnstone did an excellent job as before putting together a outstanding western novel. It's a must read!! For true western readers or those with interest good ole fashion manners.

The Continuation of a great series

Published by Thriftbooks.com User , 20 years ago
I really enjoyed the fourth book in the Last Gunfighter Series. The action is fierce and the book is one that is hard to put down. The main character, Frank Morgan, continues to try and put his guns up and settle down. but Fate won't let him. Great reading!
Copyright © 2020 Thriftbooks.com Terms of Use | Privacy Policy | Do Not Sell My Personal Information | Accessibility Statement
ThriftBooks® and the ThriftBooks® logo are registered trademarks of Thrift Books Global, LLC