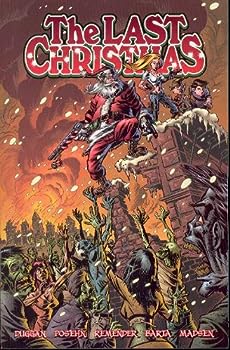 by Gerry Duggan and Brian Posehn

After the apocalypse, no one is safe; not even at the North Pole. After tragedy strikes, Santa withdraws from life and turns his back on Christmas. When he finally emerges from seclusion, the old... This description may be from another edition of this product.

Santa on a bender

Published by Thriftbooks.com User , 15 years ago
This is an interesting and entertaining story line. It's a story of a post apocalyptic alcoholic Santa. Mrs. Clause is dead and Santa wants to die but he can't. The world has been destroyed and almost all humans are now zombies. Santa has become horribly depressed and now wants nothing to do with Christmas. It's the will of one small boy that still believes in Christmas and keeps Santa alive. What in sues is a battle of wills and then a battle with zombies. There is some humor in the book. It's the kind of craziness you would expect from Brian Posehn. The graphics in this book are good to great and really help carry the story. There are a few pages in back that show some of the story boards from conception to completion. The book is in comic book format and can be read in less then an hour but you should take your time and appreciate the art work as well.

Published by Thriftbooks.com User , 15 years ago
I purchased this product after reading the description and pre-ceeding reveiws. This exceeded expectactions. The story is funny, and well instrustrated. If you are a Brian Posehn fan, or a fan of funny zombie movies, this is a great buy. My only complaint is that it was over too quick... PLEASE create MORE!!!

Published by Thriftbooks.com User , 15 years ago
I picked up this book looking for a quick funny read, what I didn't expect to be entranced by the storyline. Yes, this comic is funny...the most funny Christmas tale you are ever likely to read...but that's not all it is. It's also a really good story in its own right. The world has pretty much ended; nuclear war has destroyed the world and created zombie-like creatures. The survivors gather together in fortified cities to wait out the zombie menace, but zombies aren't the only thing these people have to worry about anymore. Nope, now there are renegade humans running around ransacking villages, raping women, and murdering anyone who gets in their way. After a group of renegades attack the North Pole and kill Mrs. Clause...Santa goes off the deep end. He becomes a hopeless drunk and all he wants to do is kill himself...this is difficult since as it turns out he can't die as long as there are good boys and girls who still believe in him. Santa sets out on a quest to kill the last children who still believe so he may finally rest in peace, will he chop them to little pieces? Or will he be moved by their innocents to sober up and put a few buck shots into a zombie scull. This comic is beyond awesome, buy it.

A Santa I can relate to.

Published by Thriftbooks.com User , 16 years ago
This book is awesome. Just the idea is great, and the whole team executes it (pun intended) really well. The image of a dirt covered Santa drinking or shooting or killing zombies or, my favorite, eating maple syrup off his own body, never gets old. The writers - Duggan and Posehn - craft a great story around the premise and really make the most of the supporting cast (especially the dwarves). The best, though, is Santa. His foul-mouthed-ness and anger are never just a joke - the character's got a believable and driving arc. And he licks syrup off himself. That ALONE is worth the price.

Published by Thriftbooks.com User , 16 years ago
Rarely has a book been as funny and well thought out as The Last Christmas. If you've ever had a desire to see Santa sink to the lowest of lows then this is the book for you. The artistic talents of Remender and Barta bring back the long forgotten days of the EC books. The writing is clever and action-packed and every so often comes out of left field with a haymaker to the funny bone! Fun for the whole family...heh heh!
Trustpilot
Copyright © 2022 Thriftbooks.com Terms of Use | Privacy Policy | Do Not Sell My Personal Information | Cookie Preferences | Accessibility Statement
ThriftBooks® and the ThriftBooks® logo are registered trademarks of Thrift Books Global, LLC