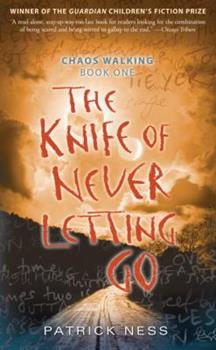 (Book #1 in the Chaos Walking Series)

Readers are in for a white-knuckle journey in this series that follows a boy and girl on the run from a town where all thoughts can be heard--and the passage into manhood embodies a horrible secret.

Published by Anonymous , 11 months ago
Bought an ex library in vgc. But received a copy in acceptable condition. I expected signs from library use but the book has a lot of tape, marker marks, endpaper tear

Published by Thriftbooks.com User , 4 years ago
The knife of never letting go is a well thought and suspenseful book. you wish for is for things to go well. I made the mistake of not getting the whole series all at once and cannot wait for the other one to come.

Published by Thriftbooks.com User , 11 years ago
...or you'll have missed out on a brilliant book. I won't regale you with plot details (you can find them elsewhere easily enough and I'd hate to spoil this for you), I'll just tell you why I loved it. A few months ago, I was complaining to a friend that there was nothing really original coming out these days in the areas of speculative fiction, particularly when it comes to the YA end of the spectrum. It all seems to be vampires this, werewolves that, discovering latent magical powers here, falling in angsty love with someone with magical powers there... My friend listened patiently and then recommended that I read the 'The Knife of Never Letting Go'. Friends are great. I chewed through this book in a few sessions. I wouldn't have put it down if everyday life hadn't so rudely interrupted. It made me laugh, cry and cheer. Then I gave it to my partner who is not a keen fiction reader and he loved it as well. Before Patrick Ness started punching out punchy fiction, he was (and still is) a journalist. It shows. Not a word is wasted in this book, the prose is always expertly crafted and never dithering waffle. The post-apocalyptic dystopian world is unique and wonderfully built, even though we only get to see it through the eyes of Todd, our illiterate protagonist. Ness evokes a rare and pure honesty in Todd's voice that immediately sweeps us up in the action and continues to hurtle us through the story until we slam into the brick wall of an ending. 'The Knife of Never Letting Go' is a masterpiece in itself, but thank the Muses that Chaos Walking is going to be a trilogy. My 'Where It's At' rating: 4.8/5 @@@@ Plot @@@@@ Pace @@@@@ World @@@@@ Characters @@@@@ Style

Is this Book as Good as the Hype??

Published by Thriftbooks.com User , 11 years ago
"The first thing you find out when yer dog learns to talk is that dogs don't got nothing much to say. About anything." Todd Hewitt is a twelve-year-old boy living in Prentisstown in the New World. The New World is a another planet that was settled years ago by people who wanted a simpler way of life. But when they reached the New World, they encountered an alien race known as the Spackle. And there was war. A war in which a germ was released that caused the "noise". This germ not only killed all the women in the New World, but most of the men. Only the men of Prentisstown are left. And they have the "Noise" disease. They can hear each others thoughts, or noise as its called. And although this sounds pretty cool in theory, being able to read eveyone's thoughts makes for a big jumbled mess most of the time. So many thoughts coming at you in all directions is enough to drive a person crazy. But this is the only world Todd has ever known. Both his mother and father died during the war. Todd lives with friends of his mother's, Ben and Cillian, and his dog, Manchee. Prentisstown is the only settlement left from when the settlers arrived on the New World. But just 30 days before Todd's 13th birthday (the one that means he's a "Man"), something happens on his walk through the swamp. Something that causes him to go on the run from everyone and everything he has ever known. And, boy is his world turned upside down! That's about all I can say about this book without giving away any part of the plot. And I think going in blind is the best possible way to read this book. Now...on to what *I* thought of it: I had to give myself a day or two's time to let the story sink in before I could write this review. Is it at all possible to love a book and hate the same book all at once? Because if it is, that's how I feel about it! I know I read a couple of reviews that said this could possibly be a new favorite of all time. I'm not going to go that far. No way this book is going on the list past The Stand or To Kill a Mockingbird. I may change my mind when I'm done reading the Trilogy. But as a stand alone book, not a chance. I need closure in my life. I really HATE when a book leaves you with a huge cliff-hanger ending. And that is exactly what Ness does at the end of this one. Reading The Knife of Never Letting Go is like riding on a roller coaster. It starts off at a real nice pace, then BAM! It kicks into high gear and doesn't stop until the final page. Not that this is necessarily a bad thing. But there is no chance to catch your breath. It is so intense that you can almost feel your heart beating at times. It is an emotional read. It will absolutely tear at your heart-strings. And it is very violent and extremely graphic. And there is another thing: I actually felt physically exhausted when I had finished reading this book. I can not remember the last time that happened to me. There is at least one scene in the book that left me so drained, I could ba

Published by Thriftbooks.com User , 13 years ago
This is a wonderful novel that should be read by anyone who enjoys fantasy and/or science fiction. The story tells of a village in a world where only men exist. The main character, the youngest boy in the village, sets off on a magnificent and sometimes frightening and hopeless-seeming journey when he discovers a young girl. I read it in less than a day, unable to put down this gripping story. Cannot wait for the next book!

Published by Thriftbooks.com User , 13 years ago
Todd is on the doorstep of manhood and running for his life. He will be faced with tough decisions, along with the consequents of his actions and the collapse of all that seems reasonable much to soon in his young life. Guard your heart - it will swell with compassion, it will be broken and it will pound with excitement and anticipation when you are done. Patrick Ness is a first rate storyteller with a vivid imagination and he is a powerful literary talent that deserves paying attention to. For readers of all ages, this non-stop thriller will take you places you've never dreamed possible.

Published by Thriftbooks.com User , 13 years ago
A tour de force for Patrick Ness. This book will barely give you a moment to catch your breath. Todd just one month shy of the birthday which will make him officially a man discovers a secret near the town where he lives. Secrets are hard to keep, as everyone can hear what everyone else is thinking. Todd must run. And while running he learns the all to adult lessons - decision making, sacrifice, loss, compassion, responsibility for one's actions and maybe worst of all, potential loss of hope. You will put the book down wishing for more right away. Mr. Ness is a great story teller, and writes with a great love of the language, compassion and depth. A book for all ages. This english edition with it's nifty cover is superb. Read this book and watch the name Patrick Ness, you will be hearing it often.
Copyright © 2020 Thriftbooks.com Terms of Use | Privacy Policy | Do Not Sell My Personal Information | Accessibility Statement
ThriftBooks® and the ThriftBooks® logo are registered trademarks of Thrift Books Global, LLC