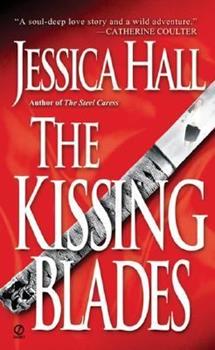 One of Catherine Coulter's favorite new writers captures the thrill of desire on the edge of danger-and takes passion to the point of no return... Los Angeles-based jewelry designer Kameko Sayura... This description may be from another edition of this product.

Published by Thriftbooks.com User , 18 years ago
I anxiously awaited this final segment of Jessica Hall's trilogy which included 'The Deepest Edge', 'The Steel Caress', and finally 'The Kissing Blades'. In this closing chapter of the trilogy Kameko Sayura a talented 40 year old jewelery designer who first appeared in 'The Steel Caress' seeks the aid of her ex lover, Sean Delaney, an alcoholic former Army Colonel after her adored young assistant, Tara, is abducted from Kameko's showroom. Kameko must give the kidnappers the famed but missing White Tiger sword collection within the next five days in order to save Tara. Thus begins an exhausting search for Tara and the White Tiger collection with the FBI and the Asian mob in pursuit.Although this episode brings closure to a superior trilogy and it continues to vividly explore Asian culture it lacks the warmth and depth of the previous books. The characters are not as deftly drawn and the action is almost too fast paced. Never the less it is a good and enjoyable summer read.

Published by Thriftbooks.com User , 18 years ago
Kameko has tried to make a life independent of her powerful Oriental mafia family. The past does not die easily, as she finds out when her young assistant is kidnapped in order to coerce her into cooperation with those who want what they think she has. To save an innocent girl's life, she must dig up another past tie that she desperately wanted to forget. She had loved Sean long ago, but they were not able to make love work. Now, he is her best and perhaps only hope in a highly complex and dangerous situation.For two books now, readers have waited for Sean Delaney, retired army agent, to get his own story. Now, they get their chance to see this charming Irish American bad boy tangle with a woman who is more than his match.***** As a story reminescent of Elizabeth Lowell's Donovan books unravels, readers are drawn into an intriguing world tackled by few writers. Swords flash in the darkness, and passion also flares. A fine dance between drawn blades takes place with a satisfying ending. ***** Reviewed by Amanda Killgore

Published by Thriftbooks.com User , 18 years ago
In Los Angeles, jewelry designer Kameko Sayura goes to deposit her receipts in the bank, leaving her able sixteen-year-old assistant Tara Jones to watch the store and to make some emerald selections. When she returns Tara is gone, a sword is imbedded into her desk with Tara's bracelet on it, and a subsequent phone call substantiates that she has been abducted. The caller demands the return of the Swords stolen by her now deceased criminal father. The police suspect Kameko hurt or killed Tara especially when she seems to hide information.Kameko needs special help and she knows one person who can do that. Retired intelligent agent Sean Delaney once abducted her in his search for her father and the swords with the encryption that supposedly could harm thousands. She finds him hidden on a farm, drinking. Unable to not help the woman who haunts him, they begin a quest to find the swords and rescue Tara not yet aware that her chip off the old block brother is in America willing to kill to possess the swords.The finale of the Tiger Swords trilogy is a non-stop action romantic thriller that answers the questions from the previous two novels. The story line moves rapidly forward from the moment that Tara is snatched until the final confrontation. The lead duo is a delightful pair struggling to evade police, the US Army, criminals, and an assortment of other individuals who want their heads. Jessica Hall wraps up a strong trio of suspense novels with a fine finish.Harriet Klausner
Trustpilot
Copyright © 2022 Thriftbooks.com Terms of Use | Privacy Policy | Do Not Sell My Personal Information | Accessibility Statement
ThriftBooks® and the ThriftBooks® logo are registered trademarks of Thrift Books Global, LLC